The Trojans faced off against Kennedy in their season-opening game at Trojan Field. Though it was a close game, Kennedy took the lead with a final score of 27-20. 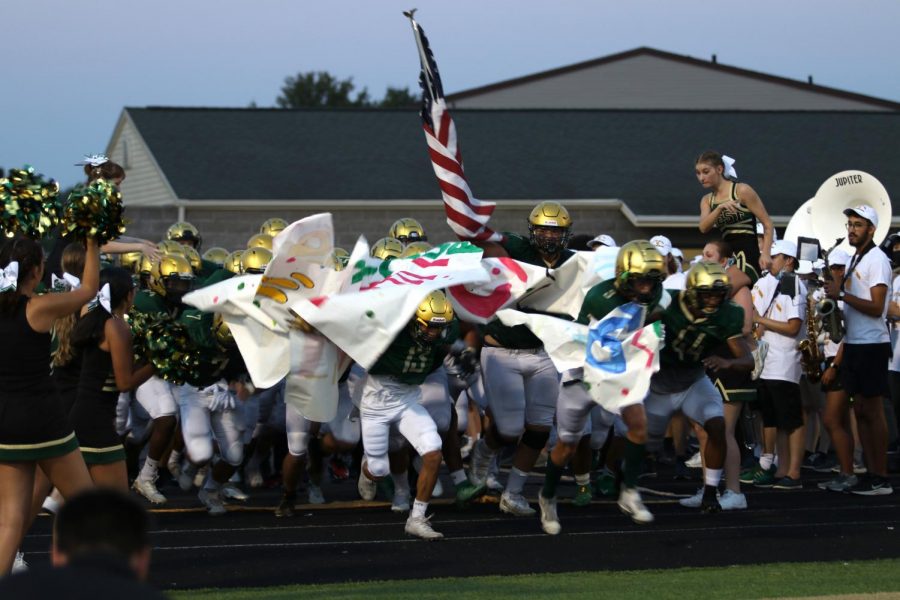 The Trojans break through a poster as they run onto Trojan Field.

The Trojan football team opened the year with a game at home against the Kennedy Cougars on August 27. With a large portion of last year’s roster graduated, the team showcased a brand new lineup filled with young talent that impressed the large crowd with a suspenseful game.

Kennedy took control of the first quarter only minutes into the game, with a touchdown after Jack Wallace ’25 threw an interception. West had a quick comeback with a touchdown from Christian Janis ’23.

With four minutes left until halftime, Mason Applegate ’22 brought the Trojans up to a lead against the Cougars with a 25-yard touchdown, bringing the score to 14-7.

Freshman quarterback Jack Wallace began his high school career starting varsity among his upperclassmen teammates. Wallace impressed in the fourth quarter with a touchdown to tie the game 20-20 before Kennedy went on to scored again.

West displayed their strong defense with about four minutes left of the fourth quarter, when they denied Kennedy a first down, and almost took control of the end of the game. However, with only 2:47 left of the game, Kennedy took back their lead. With no scoring for the rest of the fourth, the final score was brought to 27-20 with the Cougars taking home the win.

The mighty Trojans will be back in action next Friday, Sept. 3, at Muscatine in hopes of improving to 1-1.