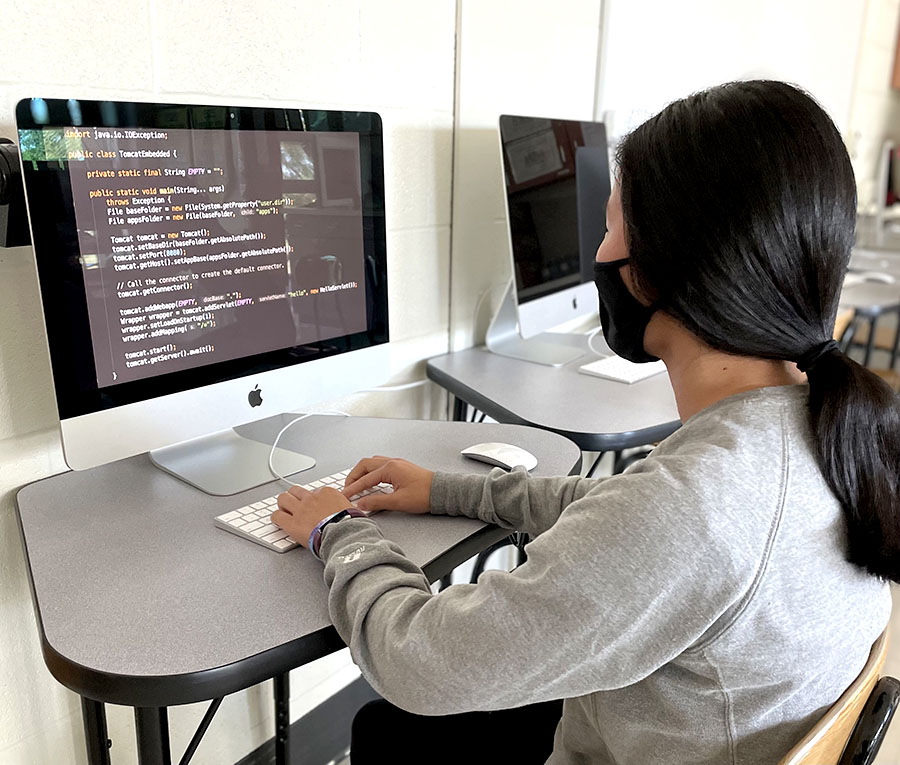 The digital age has begun and technology is only getting better. Many people feel like it is moving too fast for them. The Cyber Security Club has a solution to that. An entire club dedicated to the practice and learning of coding, hacking, programming and more.

“It’s learning about [cyber security], like learning how to hack things because we were kind of both interested in it,” says Chackalackal.

The two started this project to further their understanding of cyber security and general computer knowledge. Chackalackal wanted to learn and study with like-minded people.

The club began with more of a focus on security, firewalls, and hacking. It has since broadened the spectrum.

While other clubs had a suffering attendance over the last year, it would seem a digital club was able to thrive. The Cyber Security Club had 20-30 official members in its first year. Mr. Audia is the club’s sponsor and will have the opportunity to monitor it in person this year. The club sponsor monitors the activities and helps with coordination.

Chackalackal hopes to show more people that cyber security is not just the hacking shown in movies, but can actually be helpful for online companies.

“Cyber security is a very broad field and it is important because there are people who are hacking illegally. And because of that, it’s important to know what they’re able to do, to design systems that they can’t hack. So, when you learn how to hack into systems [with consent], it helps those [designers] protect [their system] against people who are not doing it legally,” says Chackalackal.

A career as a white-hat hacker- a hacker who tests the security of online software and sites- is not the only computer science career.

To pursue a career in cyber security or computer programming, a student would need to choose an undergraduate study of computer science or, if the school offers, something more niche. For a higher paying job, the student would need to further their education with graduate school where they could specialize in security, coding, or computer teaching. The careers that follow are broad, ranging from IT and software engineering to teaching.

Chackalackal plans to pursue a degree in computer science and will focus on finding a specialization later.

Before he can study it in college, he will focus on his legacy here.

At the club fair, a significant amount of freshman and sophomores expressed their interest in the club, giving Chackalackal hope that there will be people to continue it once the current executive board moves on.

“This year I think our main goals are number one: we want to get a good amount of membership into the club. We want to get people interested in joining the club and doing the different competitions and events we’re doing and learning things about computer science. We also want to get enough activity so even after we leave, when we graduate, there will be people who are interested in taking over the club leadership side of things,” explains Chackalackal.

“What we want to do at meetings [with] people who are more beginners is give them resources to learn and help teach them. If people are interested in something or if they want to work on a specific project, [they can]. It can be a space for them to do that, for them to find other people who are also interested so they can collaborate on that,” says Chackalackal. “We just want it to be open-ended in a certain sense like, you can come to the meeting and largely do whatever you’re interested in and work on what you want to.”

Aside from meetings and working on independent projects, the club also prepares for cyber competitions. The Technology Students Association, or TSA, has an annual competition that is similar to that of a sports team’s track to state and nationals. They have state competitions that are open to all levels of cyber knowledge. If a team or individual qualifies for nationals, they go to a more competitive competition. The events of these competitions vary. They have everything from tech problem solving, to coding, to debating relevant technical issues. These competitions are a great place to try out the skills students will gain and improve upon in their meetings.

The Cyber Security Club may sound niche and exclusive, but the proverbial doors are wide open. Chackalackal encourages anyone to join, regardless of previous knowledge or experience.

“I would say if you are at all interested in computer science, no matter what your skill level, if you feel like you don’t know anything about it yet and you think, ‘maybe I’ll be interested,’ come to a couple of meetings and see if it’s for you, then by all means come,” says Chackalackal.