Reflecting on the August 2020 Derecho, and what we can learn from it

A retrospective look at how Iowa has recovered over the past year, and the future to be taken in order to prevent another catastrophic event. 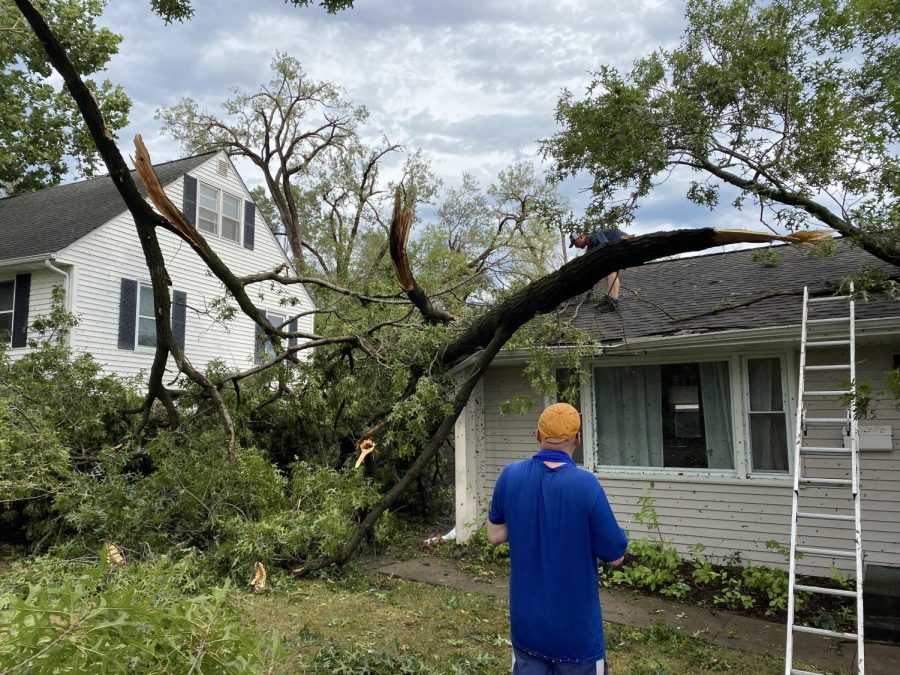 Damage from the Derecho.

“In the middle of the derecho I heard things coming down on the house, it sounded like the house was going to cave in. When I came upstairs, there was a limb that had gone through our roofing and through our ceiling.”

As Jon Welch recounts his experience of the most destructive thunderstorm in U.S. history, it’s impossible to entirely hold back the emotions that accompany the trauma of losing one’s home.

“There were moments where I just didn’t know how in the world I was going to make it through,” said Welch, the West High Orchestra teacher, whose typical warm demeanor was shaken, “You know that, that really impacted me, […] and it’s something that I’m gonna remember for the rest of my life.”

Welch’s story is one he shares with 8,000 other Iowans who had their home severely damaged or destroyed in the August 2020 Derecho.

Climate scientist David Courard-Hauri, another Cedar Rapids resident, shared the firsthand experience of how powerful 140-mile-per-hour winds can be.

“Our horse chestnut tree lost a couple of very large limbs, one of which fell upon a car parked in front of our house and completely destroyed the car.” said Courard-Hauri, who since the storm has done has research into the derecho. He added, “The scale was unprecedented, economically, at $11 billion.”

Studying the impacts of manmade climate change on weather events is extremely difficult for scientists, as their field of study requires them to be exact, and there is no way to be truly exact when it comes to studying a storm that spans the entirety of the midwest and travels at hundreds of miles per hours.

“If I had to bet, I would bet that we will see an increase as the atmosphere warms,” said Courard-Hauri, “But, I wouldn’t bet a lot of money, and it will be a long time before we can say statistically whether we have seen an increase, just because they are such rare events. The same problem makes it hard for scientists to claim with certainty that hurricanes have increased, and we get 10-20 of those in a typical year, while there’s usually only one or so major derechos in the midwest per year.”

Even if the impact of climate change on the August 2020 Derecho cannot be fully determined, the experience has still triggered an ecological apprehension in some, with Welch saying, “When you have climate change impact you directly like that, and threaten your life like that and your family’s sense of well being. It definitely changes the way you look at everything.”

However, what troubles both Welch and Courard-Hauri the most, is what the future may bring to the plains of the midwest.

“We definitely should expect more intense rainfall events, and probably the high winds that come with those storms,” said Courard-Hauri, “so the chance of smaller areas facing damage like we saw here is high.”

Welch voiced similar concerns, saying, “after the derecho, we bought a generator at one point, and I remember thinking, ‘we’re only going to need this for a few weeks because we were without power for a few weeks and without internet for a month.’ And when we were finished with that, I said to my wife. ‘You know we’ve got this big powerful generator, do we need this?’ and we both kind of looked at each other and just thought, this is for sure not gonna be the last major weather event that happens in our lifetime, and in our child’s lifetime.”

Courard-Hauri advocated heavily for increased measures to prevent future catastrophes, saying, “We expect more damaging storms, so we need to improve the resilience of our electric infrastructure. The long periods of time that Iowans had to go without power were both dangerous. Vulnerable people living without air conditioning during hot periods have significantly increased risk of death.”

On the topic of electrical infrastructure, one of the largest casualties of the derecho was the Duane Arnold Energy Center, which shut down permanently as a result of extensive storm damage. The closing of the reactor wasn’t what was most concerning, as it was scheduled to close in October 2020. Instead, what was most worrying was that according to a report from the National Regulatory Commission, there was approximately a 1 in 1000 chance of a reactor meltdown during the derecho, and workers had to work 14 hours non-stop in order to ensure a catastrophic nuclear accident would not occur. The same report also regarded the event as the worst nuclear incident in the U.S. since 2002.

There are plenty of infrastructural improvements to be made to prevent another situation like this, with Courard-Hauri suggesting several options, “Potential improvements that can be made are building stronger transmission towers to withstand winds, increasing the connectivity of the transmission grid, i.e. more interstate connection so that when part of [the grid] goes out it has a smaller impact. We should also bury electric wires where possible, and have power both more distributed, for example a smaller solar array, and more separable, for example “micro girds”, as to allow communities to disconnect from the larger grid after damage like [the derecho] and continue producing power.”

Unfortunately, few if any steps have been taken to prepare Iowa for future catastrophic weather events, leading many to wonder what they can do to keep their family safe when the next storm hits.

“As for steps individuals can take,” said Courard-Hauri when discussing future storms, “do the same things you would do to prepare for much more common extreme thunderstorms and the loss of power. Have a safe place in a basement where you can take cover, ensure trees are regularly inspected and cared for, although many of the trees that fell or broke in the derecho would have passed any inspection, prepare an emergency box to ensure that you can get by without refrigeration, and those types of things.”

But for some, in order to prepare for the next storm, they still need to recover from the last.

“​We’re a year and a month out. And, you know, it’s weird because we spent the majority of the year, just slowly getting things done.” said Welch, “We were lucky. We had a roof in place and intact before the snow fell last year before winter. But, you know, even throughout the wintertime our main living room didn’t even have insulation. It was just bare to the exterior, and we eventually were able to put up some like temporary insulation and plastic wrap and all, but we had that done in like the midwinter.”

The message Welch returned to as he reflected on the past year and 2 months was as follows, “I advise folks that when you see these weather events happening or whatever take them very seriously. ​​[The derecho] made me more compassionate to whenever I hear her pain is happening someplace, or wildfires out west, or a hurricane, or the polar vortex down in Texas, it’s just wild what’s going to happen. I think we think those are other people, or we think well that’s what you get for living there, but it’s going to happen here. It’s going to happen everywhere. And, you know, we need to do everything that we can do. Climate change is real, and it’s going to impact our livelihoods.”