In this installment of “Looking back,” Barry Diallo ’23 relives the Trojans' rise to stardom in the turnaround of the decade. 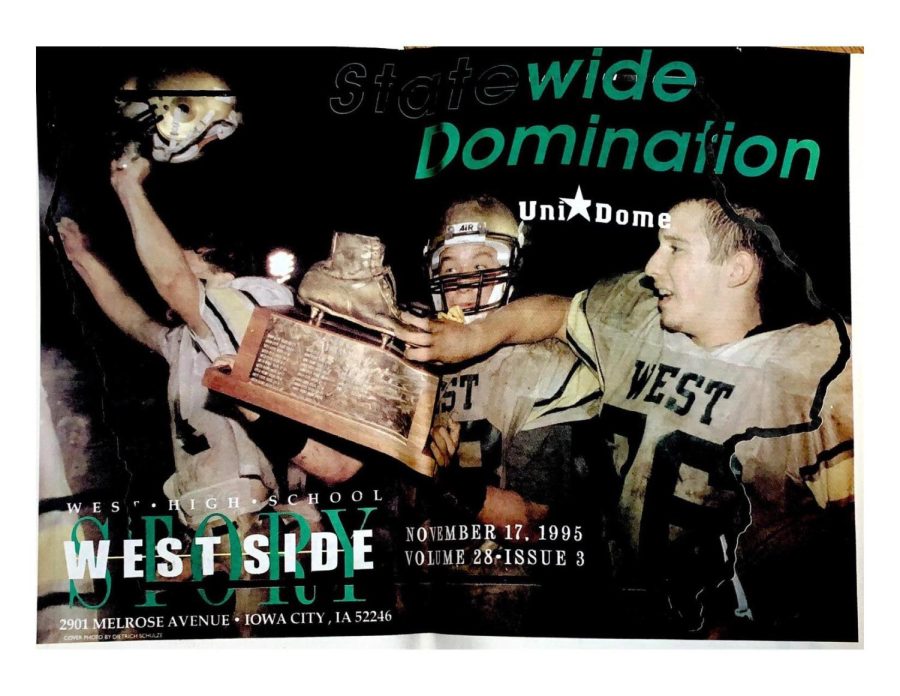 The Trojan football team highlights the front page of the Nov. 17, 1995 issue of the West Side Story.

After 28 seasons of heartbreaking struggle, the Trojans have finally made it to the Uni-Dome to play in the state football championship. West’s football team has had an incredible season. Ranked number one in the state, the team has a record of 12-0. Many of these wins occurred by invok­ing the fifty point rule.

The team has done extremely well, considering this is the only year West has advanced past the first round of state competition.

“I think we’ve got a great group of seniors this year. They are not only talented athletically and academically, they are great people. They’re proud of their accomplishments, and they’re proud to represent West High.” Coach Reese Morgan said. The success of the team is due to many factors. According to starting varsity center Ben Wherle the seniors are a crucial part of the team’s success.

“This year we have a lot of leadership from the seniors. Last year we [juniors] more or less had to carry the team because there were so few seniors,” said Wherle, but the seniors are not the only ones who make the team what it is. The state championship semi-final game against City High was postponed due to inclement weather. The game was moved from the 11th to the 13th, and from Kinnick Stadium to the Uni-Dome in Cedar Falls.

“It certainly presented some adversity, and the players had to make some adjustments. I think that any time you get ready for a competition, you get into a physical frame of mind as well as a mental frame of mind. Our players did an excellent job in making the adjustment to the Uni-Dome.”

Despite the anxiety the postponement created, West played well, scoring two touchdowns in the second and fourth quarter, and stealing City High’s place at the state championship game. The level of competition tonight is expected to be high. Ranked third in the state, West Des Moines Dowling has been on a winning streak since their second game this season and has beaten many of its opponents with last second scoring.

“Dowling is a truly outstanding football team. They’ve won the last three games, coming from behind and scoring two touchdowns in the last seven seconds of the game. They are very

talented, they have an extremely efficient offense, and they can pass the ball better than any team we’ve seen.” The West High football team will play at the State Championship on November 17, 1995. West looks forward to holding the State trophy.

Going into the fall of 1993, the West High Trojans were, without a doubt, the worst football team in Iowa. They had endured 32 straight losses, the longest winless streak in the state, and had a meager 49-162-3 all-time record.

Coach Reese Morgan, who had been hired in 1992 from Benton Community, was looking to change that. During his tenure with the Bobcats, Morgan led them to three playoff appearances and hoped to make the same strides with the Trojans. That year, the team would go on to have their best season since 1976, posting up 4 wins.

Throughout the next season, West High built upon the previous year’s progress and secured its first playoff berth. West hosted City High in the first round, and despite converting on 4th and 27 during the fourth quarter, the Trojans fell 26-21.

Sensing the potential, there was a lot of fervor in the Trojan community for the 1995 football season. It was the best football team West High had ever assembled, featuring veteran all-staters Ryan Hansen ’96 and Carlos Honore ’97 in the backfield. Defensive specialist and receiver Daren Dickle ’96 plagued opposing teams on both sides of the ball.

In the season opener, Cedar Rapids Jefferson was held to 25 total yards in a 55-0 shutout- one of nine that year. The game was called at the end of the third quarter after a 54-yard pick-six, invoking the 50 point mercy rule; a now abolished rule that ended games at any point when there was a 50 point differential.

The highlight of the regular season, though, was the Battle for the Boot; City and West were ranked 1 and 2 respectively, playing in the first-ever televised regular-season game; a so-called “Clash of the Titans.” The Trojans went to Bates Field looking to make a statement.

Amid a torrential downpour, West put up 256 total yards, all rushing, and outscored City 14-0. It was a game fought- and won in the muddy, rain-soaked trenches.

The two would meet again in the semifinals at the UNI-Dome after inclement weather forced postponements and venue changes, but it did little to hamper West High’s offensive attack; Honore rushed for 165 yards as the Trojans cruised past City 14-3.

To cap off an extraordinary season, the Trojans put up a dominant performance against Dowling Catholic in the title game. The West offense put up 42 points while the defense shut out Dowling with the help of eight sacks for the largest margin of victory in a championship game- a record that still stands.

Coming off of such a record-breaking season, expectations were high for the 1996 football team. The first signs of trouble came when, in front of a home crowd of 7000, City High broke the Trojans’ 17 game win streak and reclaimed the Boot. They bounced back and soundly made the playoffs, but the damage was done.

West welcomed #1 City High to Trojan Field for the first round. With under three minutes to go, West had a first and goal from the six with a chance to take the lead. Three downs and a false start later, it was fourth and goal from the 12. The Little Hawks forced a fumble on the last play and ended the Trojans’ season.

A 9-0 start to the 1998 football season under quarterback Kevin Long laid the doubts to rest and put the Trojans in the perfect position for a deep playoff run. Speaking of Long, City coach Larry Brown said, “I think he’s the best high school quarterback I’ve seen.” On the way to the Dome, West shut out Little Hawks twice- once for the Boot, and to advance to the quarterfinals.

In reminiscent fashion,  West matched up with Dowling Catholic in the title game. This time, however, the score wasn’t so lopsided. The Maroons managed to put ten points on the board while giving up 38 in a West High victory. A perfect season. Could they do it again? Yes, they could.

The Trojans picked up right where they left off, wrecking their way to another undefeated season and a Dome appearance.

16,000 people showed out at the UNI-Dome on Nov. 19 to watch West play Cedar Falls for the state championship. Unlike West’s previous matchups, Cedar Falls put up a fight. So much so that they were tied at the end of regulation. In an overtime thriller, each team was given the ball at the ten-yard line with four downs for a chance to score. The Trojans got ahead early on at 28-21. Needing one stop on defense to win it all, West’s defensive line stuffed the running lanes, and Nate Dvorak’s crucial third-down interception took care of the rest.

In just a few short years, the West High Trojans had steadily climbed the ladder to become the best football team in Iowa. They had gone from four-win seasons to undefeated seasons to consecutive championships.

Today, Trojan football is synonymous with success. That’s in no small part due to the expectations and legacy that were built during those early years.

West High’s current defensive coordinator, Tyler Meade, knows what it’s like at the top. His dad was the defensive coordinator under Reese Morgan and an instrumental part during the championship years. Meade was a ball boy then, and has been around West football ever since. The 2021 regular season finale against Pleasant Valley marks Meade’s 236th consecutive West football game. “I think I missed one game in fourth grade, only because it was my mom’s birthday,” Meade said.

Ashton Honore ‘24 is the son of Carlos Honore and a rising star. A crucial part of the Trojans’ defense, he also followed his dad’s footsteps into the backfield, where he is a part of a dominant trio along with Mason Applegate and Devontae Morris.

Coach Morgan and the guys that made up those teams are long gone, but the championship spirit is very much alive.