The boys wrestling team took down Dubuque Senior 58-21 in their first home dual meet of the season on Dec. 9. 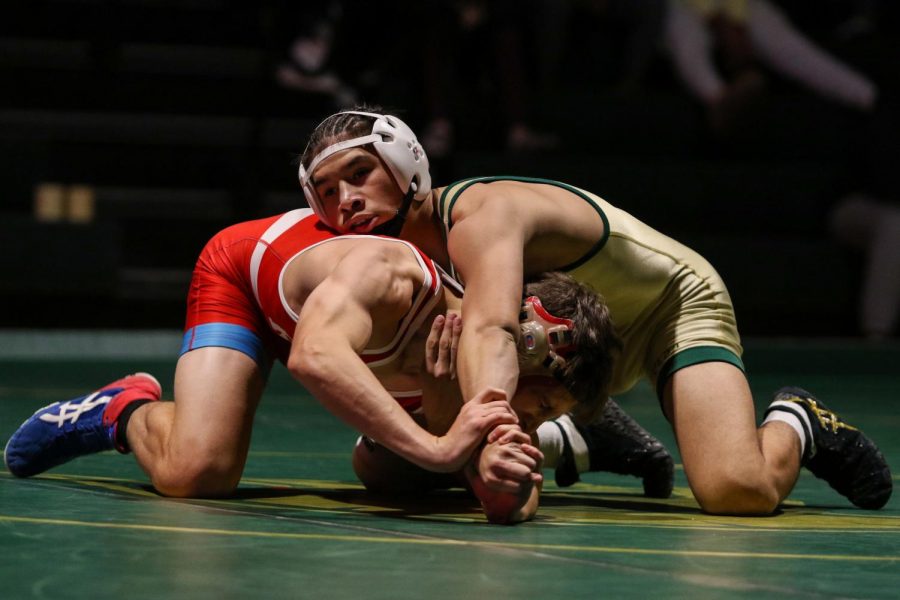 Justin Avila '25 fights for position during a dual meet against Dubuque Senior on Dec. 9.

Only 24 hours after losing former West High wrestling coach and national champion wrestler Mark Reiland the boys wrestling team honored him in the best way possible, with a win. The Trojans dominated the Rams by a team score of 58-21 thanks to nine pins on the night.

Senior Grant O’Dell got things started at 138 pounds when he pinned Dubuque Senior’s Owen Lawler ’23 in 51 seconds to put West up 6-0 early. Stanford University signee Hunter Garvin ’22 took his time to rack up a couple of takedowns before he won by fall at 152 pounds.

Future Virginia Cavalier Robert Avila ’22 showcased his talents inside the West High gymnasium for the first time when he won by fall in 51 seconds at 160 pounds.

In his second year as a Trojan, Kael Scranton ’22 took home the trophy for the quickest fall of the night when he pinned Dubuque Senior’s Olzhas Koishybek ’22 in only 17 seconds. Drake Davis ’22 took a close second one match later when he won by fall at 182 pounds in 24 seconds.

Freshman Sterling Warren celebrated his birthday and a big pin over Dubuque Senior’s Jorda Quinn ’23 to extend the Trojans’ lead and make the team score 52-18.

Kyler Scranton ’24 sealed the deal for West with yet another win by fall at 132 pounds to help the Trojans cruise past Dubuque Senior by a team score of 58-21.

Nate Moore’s boys wrestling team will be back in action this weekend as they travel to Council Bluffs to compete in a tournament.