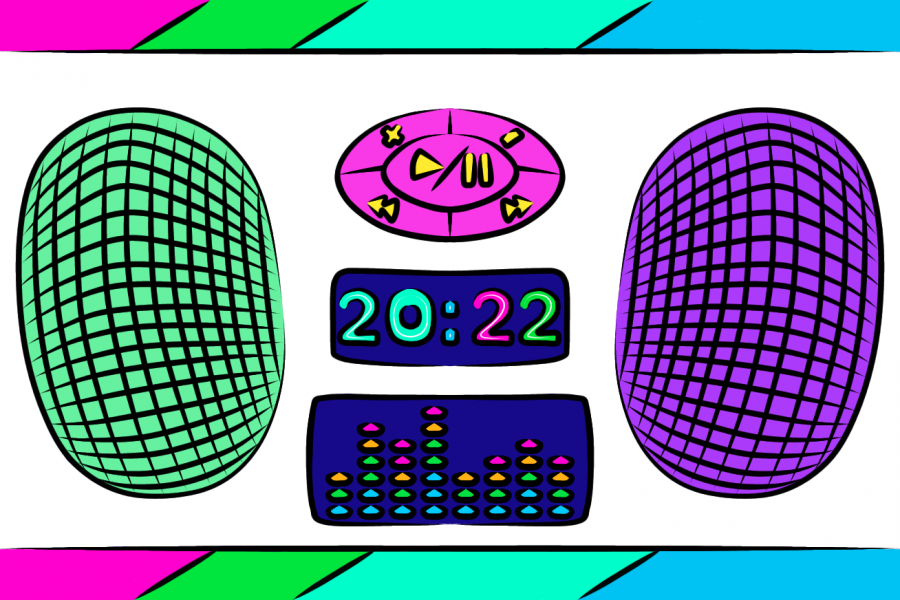 Reporter Sophie Richardson '24 breaks down everything you need to know about the 2022 Kidz Bop playlist.

I think that everyone reading this deserves an explanation as to why I got the idea to review the Kidz Bop 2022 playlist. The first time that I heard one of the songs was when I was scrolling through my TikTok For You Page, when the playlist first came out, and someone was reacting to the version Kidz Bop version of Montero. I was pretty curious to see how horrible the other songs on the playlist were so I decided to go searching for it on Spotify. I kept finding myself coming back to the playlist for a while so I just wanted to get all of the Kidz Bop out of my system by pitching the idea to write an article reviewing the playlist. So now here I am reviewing a 2 hour and 19 minute playlist. 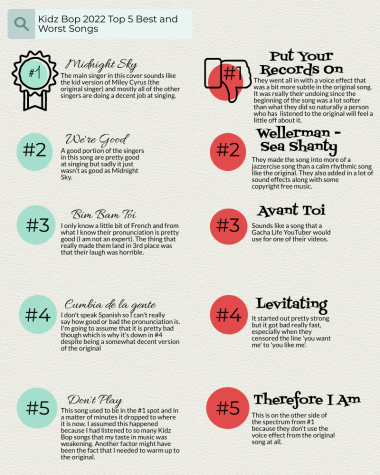 After I finished ranking the songs and determining what songs would get awards I decided to get the public opinion of the playlist. I figured out that people really don’t like Kidz Bop but the majority of them are willing to listen to some of it to get an accurate opinion on it. One person that I interviewed said, “I don’t know who would listen to it and think that it was good willingly,” and it seems like the general consensus all over the board.

Personally, I have to disagree but only a little bit. I had to listen to the Kidz Bop versions of songs at recess in elementary school and the recess supervisor, who was around the age of 50, really liked it and I liked them a lot at the time but now they really aren’t as good as I remember them so I’ve come to the conclusion that Kidz Bop is mostly only good to older and younger audiences but not so much the people in the middle.

After going through the grueling process of ranking these Kidz Bop songs and giving them awards I’ve noticed a few things. First of all, Kidz Bop doesn’t just have a USA group of singers it has a Germany, France, and UK group but the France group only has 2 people, half the size of a regular one. They all collaborated for the 2022 playlist since there were a lot of foreign language songs.

Kidz Bop, in general, speeds up the beat and pitches up the background music a little bit to match the singers’ voices and they are obsessed with giving every singer on the crew as many chances to sing as possible so, in all of their songs, the singer switches from person to person constantly.

Even though most of the Kidz Bop cast isn’t that good at singing there are three exceptions: Chanel from Kidz Bop UK and two singers from the Midnight Sky music video that aren’t on the website. The thing that really annoys me about this is that there are 14 singers that are listed on the Kidz Bop site and only one is good. 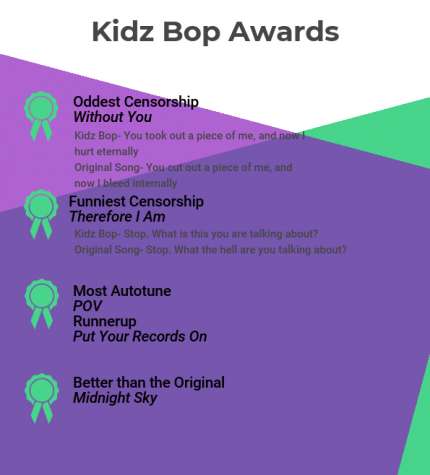 I also noticed through watching a lot of the Kidz Bop 2022 official music videos that there were two main backup dancers that appeared in almost every single one of the videos that I watched and one of them was one of the exceptions. They were actually the main singer for the Midnight Sky track and music video. At the end of the day, I learned and observed a lot more about Kidz Bop than I wanted to.