An attack on democracy

Beginning Jan. 10 journalists will no longer be allowed on Iowa’s Senate floor, placing limitations on timely and accurate reporting. 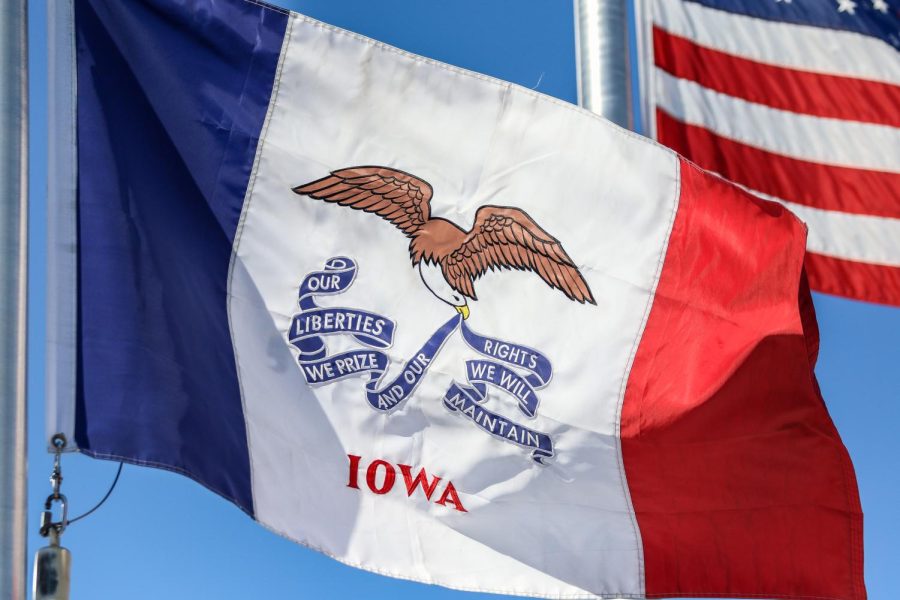 The flag of the state of Iowa flies outside of the University Heights Police station.

“Democracy dies in darkness,” is the motto of the Washington Post. Since the birth of America, the press has been a way to spread information and hold politicians accountable. Iowa’s GOP threatens this freedom.

Iowa’s Republican-controlled legislature barred journalists from the Senate floor beginning in the 2022 legislative session, which commenced Monday, Jan. 10. Before this new rule, journalists were seated on a press bench near the senators’ desks. This position allowed for the most timely and accurate live coverage of Senate meetings. Reporters will now be restricted to an upper-level gallery for the public. The position reporters in the Iowa House and Senate are controlled by the majority party, which is currently both Republican. The House, however, has yet to change its rules on media access, keeping journalists on the floor.

This creates a difficult situation, however, as Iowa’s Senate has yet to define “media outlets” despite claiming that this new rule is in response to the evolution of media.

“As nontraditional media outlets proliferate, it creates an increasingly difficult scenario for the Senate, as a governmental entity, to define the criteria of a media outlet,” said Senate Republican spokesperson Caleb Hunter in an email obtained by the Washington Post. Other Iowa legislative bodies have defined media, which will likely force the Senate too as well when holding credential-restricted press conferences.

Critics of this rule claim that there is no benefit to moving reporters, as inaccurate information only hurts the involved parties. Press groups such as the Iowa Capitol Press Association, Iowa Broadcast News Association and Iowa Freedom of Information Council hope that the rule will be reconsidered, fearing the consequences of this decision.

“Having real-time access to lawmakers allows reporters to provide important clarification, context and additional information to the public. Lawmakers who have real-time access to reporters can pass along the news that might not otherwise be reported, and also hold journalists accountable for errors or unclear information in stories,” said Iowa Capitol Press Association President Erin Murphy, Vice President Kathie Obradovich, and Secretary Katarina Sostaric. “Putting reporters in the upstairs galleries puts up new barriers to this process, and makes it more difficult for reporters to serve as the eyes and ears of the public. The better we can do our job, the better understanding the public will have of what their elected representatives are doing on their behalf.”

These last few years have been full of accusations of false news and corrupt journalism in light of misinformation spread about the pandemic and vengeful statements from former President Trump in response to negative coverage. “Don’t believe the biased and phony media quoting people who work for my campaign,” Trump tweeted in May 2016. His account has since been banned from Twitter for spreading false information. Similar statements have been made by other Republican politicians sending a clear message: don’t trust the media.

The timing of this distrust of journalists is poor, given that information about COVID-19 is vital in combating the spread of the virus. It is not a coincidence that the Republican party is the largest political party affiliation of those who are against the vaccine, particularly considering the misinformation Donald Trump spread.

According to a study conducted by researchers at Cornell University, 38% of all “misinformation conversations” in 38 million articles about COVID-19 mentioned Donald Trump.

These situations are perfect examples of the necessity of accurate reporting and unrestricted reporter access. This rule is a dangerous step toward media censorship. It is crucial that reporters are given the resources to provide the most up-to-date and accurate information. It is the responsibility of the press to hold politicians accountable and provide a Constitutional check to the power these parties hold. Public opinion is a key player in the political chess game, and educated opinions are not possible without ethical journalism. Journalism is the backbone of Democracy, and we cannot lose this light in the darkness.