The boys swim team finished second at the state meet at the Campus Recreation and Wellness Center in Iowa City Feb. 12. 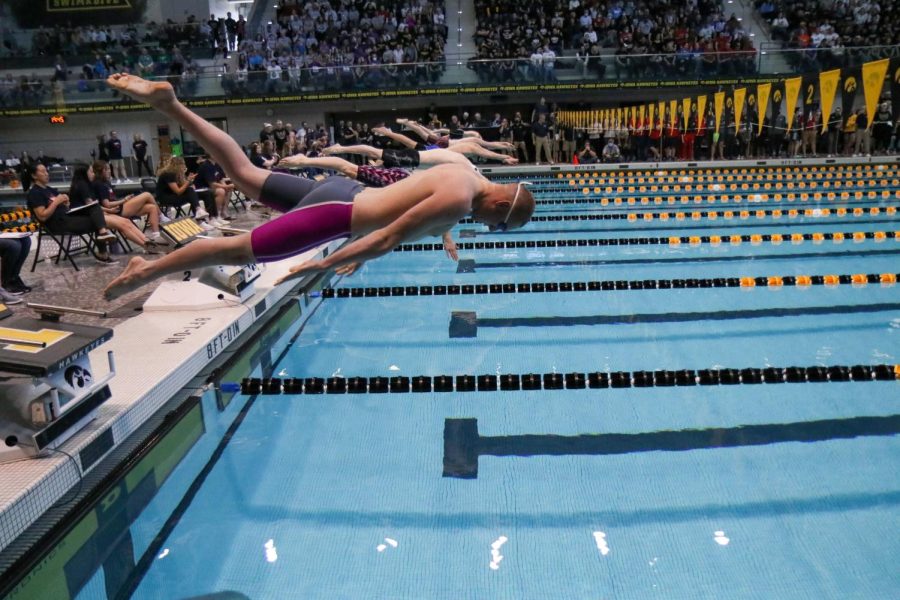 With seven seniors on the state team roster, the Trojan Bolt swim team headed to the state meet in hopes of making it the most memorable season finale yet.

“We’re really excited about that,” Brotherton said. “It’s been our goal since the beginning of the season, even last year really, to break that record and take it away from City, and to get that job done, it was awesome.”

In a narrow race against Sioux City Metro senior Kohen Rankin, Brotherton placed second with a time of 20.56 in the 50 freestyle.

Andy Luo ’22 placed eighth in the consolation final of the 100 fly in 53.51 and teammate Carter finished fifth overall with a time of 50.12.

Skelley and Brotherton both raced in the championship final of the 100 freestyle. Skelley went a 47.32 to place seventh and Brotherton finished as state runner-up with an automatic All-American time of 44.69.

In the 500 freestyle, Lukas Swanson ’23 dropped 2.45 seconds from prelims to finish fifth in the consolation final with a time of 4.48.88. In the championship final, Gerke touched the wall in 4.40.11 to place sixth overall.

In a three-way race for the state title, Skelley battled Bettendorf’s Alex Stone and Waukee’s AJ Abram in the final leg of the 200 freestyle relay. The team of Brotherton, Damon Conzemius ’22, Gerke and Skelley finished as state runners-up in an automatic All-American time of 1.23.22, with the top three teams finishing within 0.3 seconds of each other.

Skelley went a 53.30 to place seventh in the consolation final of the 100 backstroke. Adding another podium finish, Carter placed eighth in the event with a time of 51.94.

Christensen added a top-three finish in the 100 breaststroke, placing third with an automatic All-American time of 55.66.

In the final event of the meet, the 400 freestyle relay team of Gerke, Carter, Christensen and Conzemius placed first in the consolation final with a time of 3.08.21. Improving their seed time by over six seconds, the relay placed fourth overall in the event to secure the Trojan Bolts’ state runner-up title with 232 total points.

“It was really rough not having Dylan this year, but I feel like all of us had him in the back of our minds [and] we’re all racing with him in our heads,” Carter said.

Head Coach Byron Butler believes this unity and dedication were reflected in the team’s performance.

“Our guys improved on our seed more than any other team today, and we really moved up and we weren’t seeded to get second,” Butler said. “So [I’m] really really proud of that. We swam for Dylan [and] swam for each other, and I think we did awesome.”

After the last meet of his high school career, Brotherton is thankful for his time with West High’s swim team.

“The state meet means everything to me,” Brotherton said. “I love swimming, it’s really close to me and I love all the guys who I get to compete against and I am super grateful for it.”

Christensen looks forward to what the Trojan Bolts can achieve next season.

“I hope that these guys will stay strong and continue what they’re doing. I mean, we’re heading places,” Christensen said. “I know they have a lot of improvement to go, and I’m just really excited to see what they can do in the future.”