A look inside the West Soccer program through the eyes of the underclassmen. 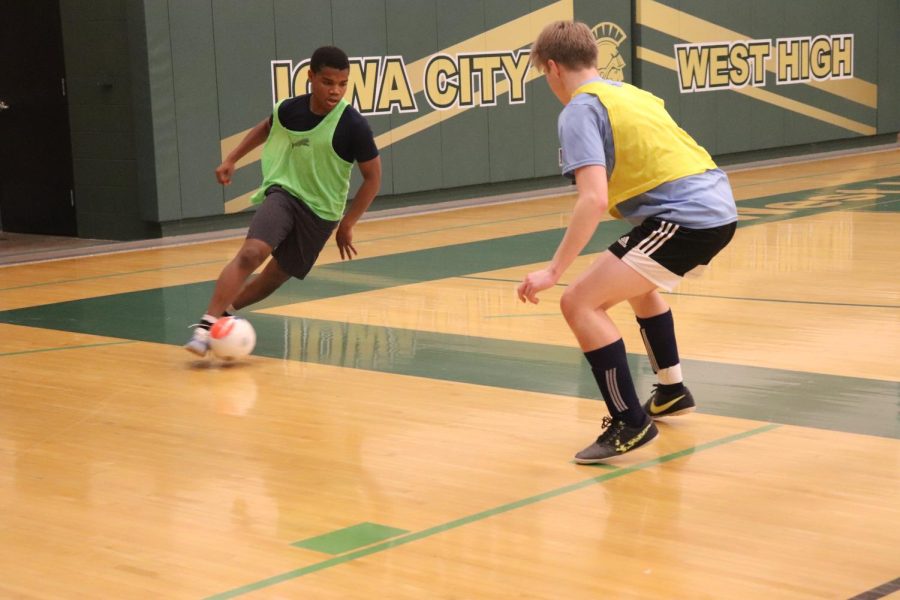 Playing soccer, Nathanaeli Baraka Madumba on the green team goes against Trey Montgomery on the yellow team, in a one versus one situation.

Pictures were taken at a West High open play.

The West Soccer team is known for having a great program. This was true for the team last year. The Trojans entered the State Tournament as the number one seed. They managed to reach the State Championship with an 18 game win streak. Although the Trojans lost to Pleasant Valley 1-0, the program still had a great season, in which they went 20-2.

This year the team will look very different because an astonishing amount of the varsity players last year have graduated. In 2010, a similar scenario played out, in the 2011 season. Although the 2011 season might not have gone the way the Trojans wanted it to, it didn’t take long for the team to reassert itself as a top-tier program. So with all the changes that are going on, it begs the question, how will the next generation of players at West keep the phenomenal legacy of the team alive.

Richard Wu ‘24 is a sophomore this year, but even as a Freshman he played as both a backup keeper for varsity and the main keeper for JV1. He was one of only three Freshmen last year to make varsity. He says, “I have played soccer on and off since I was five.” He adds, “I started playing goalie when I was nine or ten.” Richard used to play for the Iowa Soccer Club, but last year he quit. The reason, he says, “I play football for West High and I couldn’t make the commitment for both.” For the football team, Richard played both wide receiver and defensive back. “I think playing football has helped me prepare with all the catching drills we did,” he says. Over the summer Richard attended goalie training sessions with West, however, due to state law West is prohibited from providing these opportunities during the school year leading up to the season. Some other ways Richard trains in order to maintain his spot he says, “Just getting outside with friends, and my brother helps a lot.” he continues, “Just getting shots on.” Richard takes advantage of the lifting programs. “I think the lifting programs at West are really beneficial obviously as a goalie strength, conditioning, and explosiveness are really important,” he says, “I feel like strength is important, but it’s more technique and reaction, but obviously the strength will play into the explosiveness.” The tryout process for a goalie however is a little bit different than the tryouts for every other position. “After just the regular tryout, we go off to the turf for specialized goalie sessions.” However, goalies still have to partake in the baseline fitness test in order to make a team.

Erwann Charles ‘25 is a Freshman at West this year. He’s played soccer for nine years. He says, “Most of the time I play striker and Attacking Midfield,” he adds, “They’re really good positions. I really like them.” Charles decided to try out for the team because both his brothers played soccer for West. In fact, one of his brothers, Corentin Charles 23’, still plays for West. He also says, “I really like playing soccer.” Outside of high school, Charles plays for the Iowa Soccer Club and has done so for five years. Using the opportunities that West provides is something Charles does regularly. “I take performance,” he says, “I also go to the West open plays.” Charles’ ultimate goal is to make Varsity, though at the moment he doesn’t really know what to expect from high school soccer.

Every player wants to be on the field contributing to the team. However, for Leon Wu ‘24 this isn’t an option. In the first game of the 2021 season, Leon dislocated his shoulder, and since then, he says, “It’s kind of been like a repetition of injuries. I’ve dislocated my shoulder about three or four times in the past year and a half now.” He got it checked out and found out he had a labral tear and other damages to his right shoulder. “They decided I would get surgery on it ASAP to get that all fixed up.” Leon’s surgery is scheduled for early March. For the recovery period he explains, “It’s supposed to be a three to four-month recovery period until I can get back into soccer, and then probably another two months until I’m fully recovered.” This means Leon is out for the entirety of the Highschool season. However, this has not stopped Leon from training and playing soccer. “Yeah, I’m at risk for injury, but at this point, I’ve injured it so many times I couldn’t care less,” he adds, “I’m taking the right precautions now.” Leon has worn a brace to help protect his shoulder while he plays. “I want to hold myself accountable. I don’t want to just stop showing up to practice cause I have an excuse.” Although Leon won’t be able to play for West this season, he still plans on staying involved with the team. He says, “I’m planning on potentially being like a team manager or maybe a cameraman for the team this year. I just want to find a way to contribute however I can.”