The Trojans won 49-32 against the Tigers in the regional semifinal game Feb. 19. 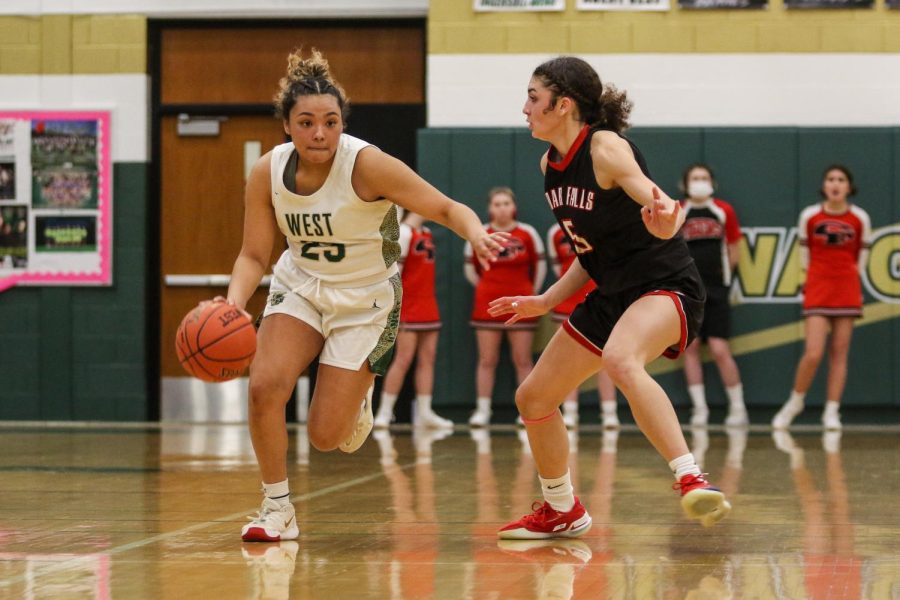 Keiko Ono-Fullard '23 pushes the ball up the floor against Cedar Falls in the regional semifinal on Feb. 19.

BJ Mayer and the girls basketball team had a chance to do what they do best on Feb. 19 against Cedar Falls: win in the postseason. The Trojans faced off with the Tigers in the Class 5A Region 8 semifinal in hopes of advancing to the regional finals next Tuesday.

Fouls on Tate put her on the free-throw line multiple times during the third quarter. Tate successfully made all her free throws to tie the game 25-25 with 4:30 left in the third quarter. Tate connected with Wolf for a two-pointer 28-29 Cedar Falls. Wolf connected from beyond the arc to retake the lead. The Trojans led the Tigers 31-29 at the end of the third quarter. In the fourth quarter, Ono-Fullard found Tate in the paint to make it 33-30 West. Head Coach B.J Mayer called a timeout to regroup the team during the intense quarter. West then gained momentum late in the final quarter to widen the score gap between Cedar Falls. Tate scored to put two more points up on the scoreboard for the Trojans with 5:15 left in the final quarter 37-30 West. On the defensive side, Lacy had two major blocks, but the Tigers were able to put in a layup to make the score 37-32 West. Anna Prouty ’23 took the rebound and turned the score to 41-32 with 2:44 left in the game. After another timeout, Tate scored four more points to extend the lead to 45-32 West. Ono-Fullard made her free throw with 1:02 left in the game to secure the Trojans’ win against Cedar Falls 47-32.

The girls basketball team will travel to West Des Moines Valley next Tuesday for the regional final game.