Johnny Depp vs Amber Heard: What the trial really stands for

What started as a typical case of “he said she said” has now become an intense discussion about what can define mutual abuse and DARVO. 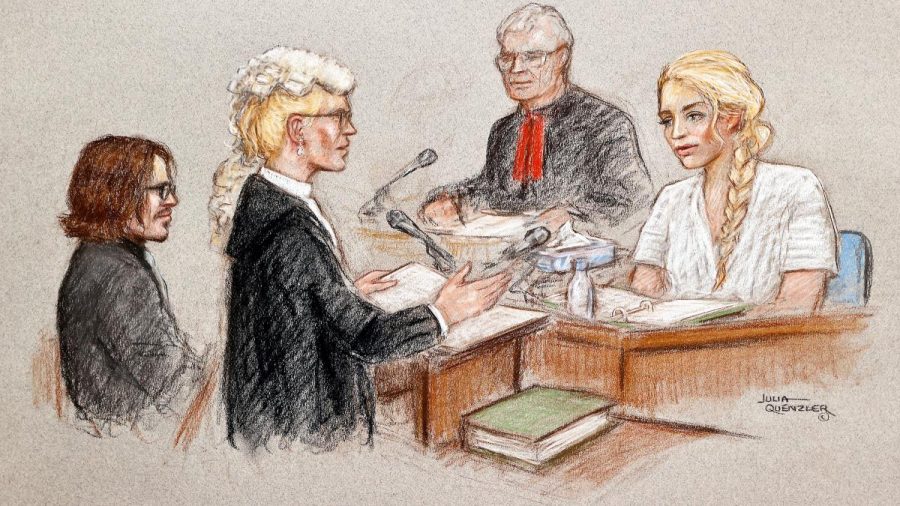 Gender and sex should not be seen in the eyes of the law. Abuse is defined as “an action that intentionally causes harm or injures another person. This can refer to physical abuse, psychological abuse, mental abuse, or child abuse,” not whether the victim is male or female.

Celebrity gossip has reached new peaks as the Johnny Depp vs Amber Heard defamation case has fallen under the prying eyes of America for the past few weeks. So far, it’s safe to assume that this trial goes much deeper than who offended who. Bombshells have been falling left and right, assuring that in the end, no one is coming out of that Virginia courtroom completely unscathed. The only question now is: will there be victims? Here’s my answer— there already are.

A brief summary for those who have been kept out of the loop— already several weeks into testimonies and set to end on May 27, Johnny Depp, 58, is currently suing his ex-wife, Amber Heard, 36, for 50 million dollars for defamation over an op-ed she wrote in the Washington Post, referring to herself as a “public figure representing domestic abuse,” back in 2018. Titled “I spoke up against sexual violence — and faced our culture’s wrath. That has to change,” the op-ed does not specify Depp by name but claims verbal and physical abuse by the actor, who has since denied such accusations. Heard went on to countersue Depp for a 100 million dollars, alleging that his former lawyer, Adam Waldman, defamed her by claiming an “abuse hoax” to the Daily Mail, a known British tabloid. Her lawsuit states that the lawyer has conspired with Depp in order to “attempt to destroy and defame Ms. Heard in the press.”

As testimonies have progressed, Depp has further insisted that he had never once struck either Heard or any other women for that matter. In fact, he asserted that it was Heard herself who instigated the many violent incidents in the duration of their relationship.

One of the more notorious confrontations the actor gave his account of was back in 2015 when the couple was in Australia for the filming of “Pirates of the Caribbean: Dead Man Tell No Tales.” Heard had thrown a handle of vodka, angry after coming home from a meeting about a possible postnuptial agreement with a lawyer, and ended up shattering Depp’s middle finger.

Throughout the trial, more and more reveals have been coming to light, instigating a heated debate about whether the abuse could possibly be mutual. So far, both sides have managed to provide evidence that abuse was both given and received. Depp’s side has compelling proof, including several audio recordings of Heard confessing to intentionally causing physical harm, hospital records of his acquired injuries, as well as testimonies from several professionals, debunking many of Heard’s claims of supposed domestic abuse from Depp. Heard also makes a decent case, providing witness testimonies, crude and graphic text messages and emails sent from Depp, and photos of her bruises.

With all of the media attention, the trial has been receiving, there has been heated debate among the online community as to who is the true perpetrator. The opinion has been rather split between Depp and Heard until a third side suddenly arose; the possibility that both may be considered guilty of abuse. Dr. Laurel Anderson, a marriage counselor who has previously treated the formerly married couple, has stated in a previous hearing for the trial that the couple saw their relationship as “mutual abuse,” after mentioning that Depp had once confided in one of their sessions that “Amber gave as good as she got.” This comment would later receive heavy criticism from those who disagree that mutual abuse even exists, including The Insider, who released an article in which other professional therapists explained that that kind of dynamic doesn’t fit in the definition of abusive relationships. The National Domestic Violence hotline defines abuse as “a pattern of behaviors used by one partner to maintain power and control over another partner in an intimate relationship.” In other words, there must be a clear power dynamic between the perpetrator and the victim, in which the perpetrator exerts their influence to maintain control.

This brings up the question of who exactly in this abusive relationship was in control? It is tempting to think the answer is Depp, as he is not only the male, older, and more widely-renowned celebrity of the couple, but one’s position in society doesn’t always determine their position in a relationship. Being male or older doesn’t generally mean they hold all of the power; it doesn’t stop the other person from hurting them. Whatever the case is, most would agree that mutual abuse could be taken off the table.

If anything, people have speculated that this could be a case of DARVO (Deny, Attack, and Reverse Victim, and Offender) instead. DARVO is a type of manipulation tactic, similar to gaslighting, in which the abuser manages to shift the blame and take on the role of the victim. With that in mind, the hashtag #DARVODepp began to trend on Twitter, begun by Heard supporters insisting that it is Depp who is implementing the manipulation as he is the more beloved public figure of the two and is using his image to make him appear as innocent. On the other hand, Depp supporters have gone out of their way to point out that Heard has attempted to change the narrative of the case multiple times by making many allegations against Depp during her testimony, and has been caught up in many contradictions since. One most notably being her claim on using a Milani Cosmetics Conceal + Perfect All-in-One Correcting Kit in order to cover bruises supposedly given by Depp, only for the company to go out on Tik Tok confirming that the makeup kit did not in fact get released until December of 2017 which means it was impossible for Heard to have used it as she filed for divorce back in May 2016. Heard’s legal team has since then insisted that their initial words were wrongly interpreted.

What is so bizarre about this trial is that no one is even suing each other for abuse, and yet domestic abuse (DV) has become the main topic at hand. The current situation shows that whoever can manage to prove that the other was the sole abuser will be able to claim victory in the overall case; and in the case of Depp, it would stand for more than that. More than just a victory for himself, it would be a victory for all male DV victims everywhere who face double standards for their trauma because of their gender.

While DV has been considered a gendered crime for many decades now with the majority of victims being female, male victims of DV rarely ever find it in themselves to speak out. This has made it difficult to obtain accurate statistics on male DV as so many incidents go unreported due to the stigma surrounding this subject.

The damaging stereotype that victims are primarily female while offenders are primarily male has been prevalent in the case itself. Dawn Hughes, another psychologist brought in by Heard’s legal team, has been under fire ever since her testimony supporting Heard’s allegations of facing abuse by Depp. Hughes diagnosed Heard with PTSD (Post Traumatic Stress Disorder) and has confirmed during her examination that she has most definitely faced endured intimate partner violence during her marriage with Depp. What struck most people, however, was that during her testimony, Hughes used female pronouns while describing victims of abuse, prompting people to believe she is being biased against men in cases of DV.

There is a clear double standard occurring in the midst of all of these accusations, especially as there is definite proof that Depp is a victim of abuse by Heard. Back in 2020, Depp lost a libel case against The Sun after the newspaper released an article referring to him as a wife-beater. Once the case was taken to court, Heard was brought in as a witness to testify about Depp’s alleged abuse, bringing the judge to decide there was “substantial” evidence that Heard was indeed abused. Due to this incident, Depp lost out on roles and his reputation plundered, even being excused from Warner Bros from playing in the next “Fantastic Beasts and Where to Find Them” film and dropped from the “Pirates of the Caribbean” franchise. While this response is appropriate in any situation where an abuser is found guilty, one must point out that Heard may deserve the same treatment considering the evidence against her for abusing Depp. Fans of Depp certainly think so as a petition has been going around online to have Heard dropped from “Aquaman 2.”

What needs to be taken to heart about this case is that abuse needs to be taken seriously, regardless of sex. There is such a lack of support for male victims due to the anti-feminism agenda as well as those who take their so-called “feminism” too far and get the word mixed up with “misandry” instead. Feminism refers to advocating not only for women’s rights but for complete equality in all sexes, and it shouldn’t be mistaken for misandry: feelings of contempt or prejudice towards men. It’s that sort of attitude that makes DV among the most unreported crimes worldwide, especially for male victims. Depp certainly isn’t the first male ever to speak out about being a victim, and hopefully from the trial, he won’t be the last.

Whatever the outcome of this trial is, there is no mistake that it will have a heavy impact on peoples’ views on the #Metoo movement. Whether people will start acknowledging male DV victims or take this case as proof that any abuse allegations from women shouldn’t be taken seriously anymore, this is a test of how we as a society handle the concept of what true feminism is.