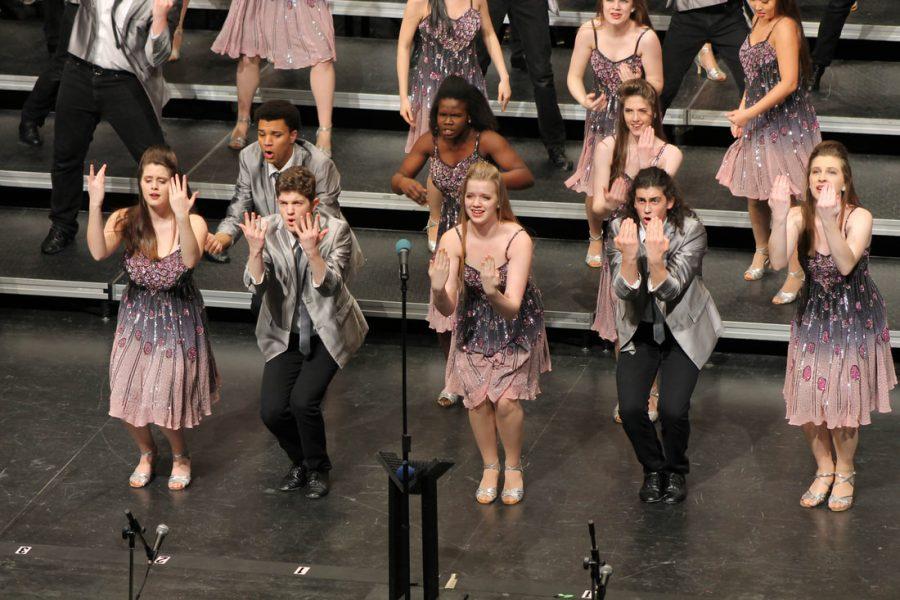 Just like in choir, the performers on stage sing their hearts out. About 60 members make up each group and are directed by West High’s choir directors. Associate Director Luigi Enriquez is in charge of Showtime, the prep group, while Director David Haas directs GTC, the varsity group.

Although this is Enriquez’ first year directing show choir, he has enjoyed the experience.

One of the differences he’s noted between show choir and curricular choir is how intensive show choir is.

“In curricular choir, it’s one performance of your fall concert and then that’s it, really,” Enriquez said, “So you don’t get that kind of rework, and I think that’s one of the beauties of show choir. You can rework something, take things out, add things in.”

Haas, who has directed show choir for eight years, has spent his third year with GTC reflecting on the philosophy behind why the kids perform.

That’s [the beauty] of show choir. You can rework something, take things out, add things in.”

“The idea of ‘Great People First’ kind of came from [wanting] the kids to [hold onto] the skills that they take from participating in show choir,” he said. “Being able to think of one another as a team and to constantly be finding ways to help one another out. That’s really important that they come out with more than just the ability to hold arms at a certain angle or sing a 20-minute set.”

The thematic arcs of the two show choirs’ shows tie together this year, an intentional decision made by Haas after arranging GTC’s performance.

“When you sing the text over and over again, it creates … an explicit message [that] when you’re going through these hard times at this point in your life, you should just always keep in mind that I and the choral department as a whole will always be here for you, whether you recognize that now or whether you recognize it in the future,” Haas said. “[Jeff Knutson and I] thought it would be kind of a cool idea to then build the Showtime show off of that so Showtime could be going out into the world and then GTC picks it up and … brings it back home.”

When you’re going through these hard times at this point in your life, you should keep in mind that I and the choral department will always be here for you, whether you recognize that now or in the future.”

Although Enriquez was asked if he wanted to pick his own show after he was hired, he desired to stay with what was decided before him because it felt right.

“[The show’s] about [a] personal journey from weakness to strength,” Enriquez said. “I hope that kids learn to search for [their] place in the world, to brave through the ups and the downs, [to] fight the negativity that’s out there…. And … along the way those things that have impacted [them make them] find [their] spot…. ‘There will be people to guide you along the way and … pick you up when you fall,’ you know?”

He appreciates the feeling the kids have when they celebrate after a successful show, and he hopes this continues for subsequent years.

“I just want [them] to go out there and … give it all [their] heart and mind and just perform for each other,” Enriquez said. “I’ve said that many a time. This is a team activity and if you start to think only about yourself, the music will suffer and the group will suffer. Perform for each other and …. enjoy.”

Haas has his own set of hopes as well.

“The thing I’m looking forward [to] is when I look at the freshmen, sophomores and juniors that are currently participating in the choral department,” he said. “I’m looking forward to them stepping up and being the next set of leaders…. Someday, some of them will get to jump in and maybe learn choreography that’s a little bit harder and music that’s a little bit more complex.”