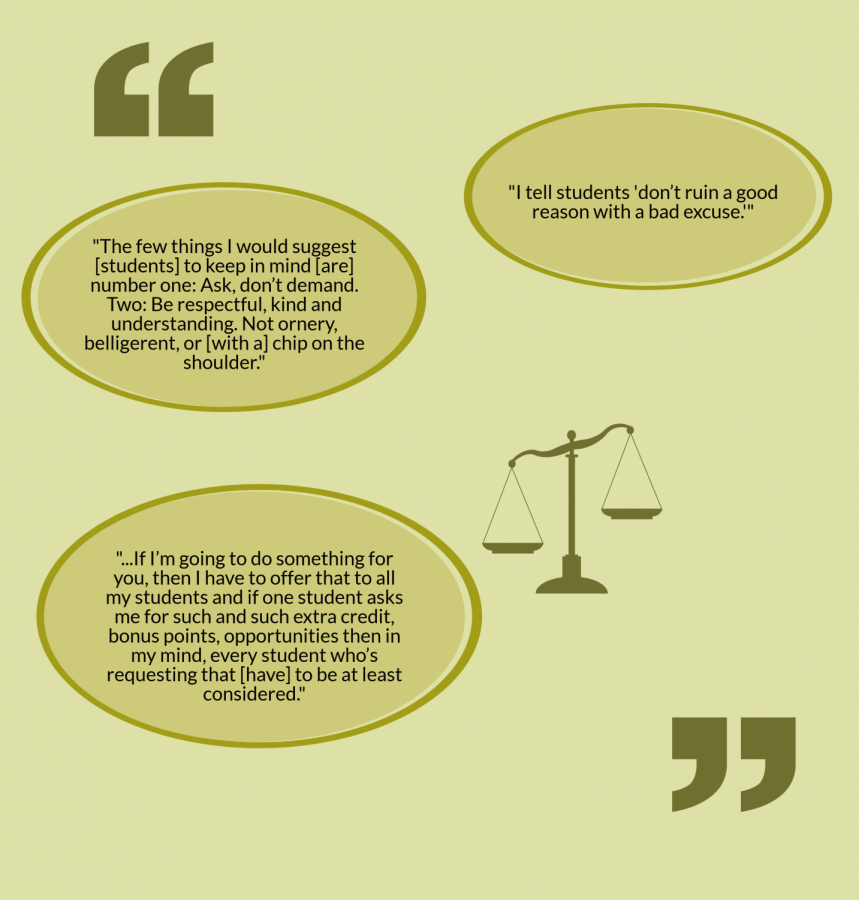 James Kirpes (JK): This actually has come up recently…. The few things I would suggest [students] to keep in mind [are] number one: Ask, don’t demand. Two: Be respectful, kind and understanding. Not ornery, belligerent, or [with a] chip on the shoulder because that tells the teacher that not only as a student do you have a concern but you recognize that the teacher is a human just like you.

WSS: Do you appreciate people’s concern about grades when they are asking for a bump up in percentage?

JK: As I tell the students, I would much rather have you come to me with a concern than not come to me and gnash your teeth and complain to a friend . . . That doesn’t mean the student is going to get what she or he desires necessarily, but it at least in my mind sets a promising or at least a more positive foundation for the interaction. Every time a student asks me something I tell them, ‘One: I want to be fair with you. Two: that implies I need to be fair to all my students.’ So if I’m going to do something for you, then I have to offer that to all my students, and if one student asks me for such and such extra credit, bonus points, opportunities, then in my mind, every student who’s requesting that [have] to be at least considered.

WSS: How would you generally approach a student whose grade is on the edge?

JK: One: I want to confirm with the student that everything entered is indeed accurate because that’s an easy fix . . . Assuming everything is accurate, then we might look at things such as ‘Did they do everything they could to maximize their opportunities?’ In other words, students make choices. Did they choose not to do all the assignments and maybe not earn all the points associated? Did they choose not to take advantage of an extra credit opportunity? Did they choose to maybe be less attentive in class? Were they digitally distracted during class?’ . . . I’m comfortable [leaving] things as they are. One, from a fairness perspective and two, the other side of the fairness perspective is you have someone at 89.7. But now ‘Jessica’ is at 99.7, so is it fair to Jessica that you both end up in the A range?

“It’s always nice to remind the teacher, ‘Hey, here I am, I missed the last three days,” because as much as we love our students, when you have 150 students, you don’t always remember they were absent or how long they were absent.””

WSS: How would you like a student to approach you if they know they will be gone?

JK: In general, notify me when you know it’s going to happen. So if it’s four weeks out and your family is thinking about doing something, I don’t necessarily need to know that. If it’s one to two weeks out . . . then I like to know from the student and then we can do one of two things. If you are going to be gone for this week then how about the two weeks before that? We have a plan in place where they start doing two for one assignment or three assignments every two nights or some equivalent.

WSS: If someone has been gone without giving a heads up, what’s the best way to approach the teacher?

JK: Just a quick reminder of the details and then generally I’ll say something to the effect of ‘Oh, yeah, how are you doing? Hope you’re feeling better. Did you do any of your math while you were gone?’ . . . and then generally I’ll try to have a plan in place so by the end of the week or next Tuesday or ‘Oh, you missed a shindig. When do you think you’ll be ready for that?’

WSS:  Would you prefer people come and talk to you in person or over email?

JK: Absolutely in person 100% . . . In 60 seconds we can cover six back and forth email communications . . . Sometimes students will hide behind a screen to avoid their responsibilities, and by coming in, that’s a signal to me.

WSS: How would you explain to a teacher if you haven’t done your homework?

JK: Number one: honesty. Just flat out honesty. You know, ‘I blew that one,’ ‘I missed on that one,’ ‘I just plain forgot,’ or ‘I had a concert’ or ‘I had a track meet’ or ‘My grandfather was in the hospital.’ Just for me, honesty is always the best policy. And I try to be candid and honest with my students . . . and I try not to make [an excuse]. I tell students, ‘Don’t ruin a good reason with a bad excuse.’ . . . I ask my students to be candid and honest with me so when they tell me something, I accept it at face value. Is that always the truth? No. But I firmly believe that if I respect my students and their lives that they’re having then they’ll respect me in return and not make something up . . . and then to extend that in my mind I need to be compassionate. If they tell me, ‘Sorry, Grandfather had a heart attack, I was at the hospital,’ don’t worry about your assignment, take care of your family … and you let me know when you think you can get the assignment done. I think students, in general, respond to that. Not a perfect system … and I know some people will take advantage of that. But in general, I think that part works well.

WSS: What is the funniest excuse you’ve heard for not doing their homework?

JK: I don’t know if it’s the funniest story but perhaps the most amusing one … i’s a whole string of things. ‘I couldn’t do my assignment because my Chromebook was dead’ or something like that. ‘Well, could you charge it back up?’ ‘Well, I didn’t have my charger.’ ‘So did you think to borrow one from a friend, did you think to use your hardcover book?’ ‘Oh, no, I didn’t do that.’ ‘Did you think to text someone or ask them to snap a picture of the pages?’ . . . They ran into this one difficulty and then [decided] ‘Oh, I’m done,’ as opposed to being a problem solver.

Just for me, honesty is always the best policy. And I try to be candid and honest with my students . . . and I try not to make [an excuse].”

WSS: What would be the best way to get an extension on an assignment?

JK: It used to be late assignment [equals] half credit . . . and now I don’t know if I’m more understanding. Maybe I’m more realistic, maybe I’m more sympathetic, I’m not certain. But [I’ll be like] ‘I get it. Can you bring it in tomorrow? I’ll still give you full credit.’. . . So be upfront, approach me. That’s always a good idea. Don’t wait for me to come around in class and then start fumbling like you’re looking for it. Just when you get to class say ‘Sorry, Mr. Kirpes, I don’t have it today. Is it okay if I bring it tomorrow?’ . . . That’s an easy fix. The other thing I want to say is, of course, getting back to the honesty thing, a teacher kind of gets a sense if a student is trying to take advantage of the system.

WSS: How can students connect with teachers outside of school/class?

JK: There is very good research that three things make a good teacher. Number one: content knowledge. If you don’t know your stuff, you’re going to have trouble teaching it. Number two: enthusiasm. If you’re dull and dry and monotonous that’s going to be a lot tougher to engage your students. The third aspect [of being a good teacher] is personal relationships with the students. It’s a lot easier having a personal relationship with the student when you have a class of 22 than when you have a class of 35. That’s just a numbers game . . . absolutely having that relationship, knowing what the student is interested in, knowing what keeps them busy outside of school that’s that personal relationship. And for me, part of the way I do that is through my sponsorship of math club and chess club and F^3. So it’s school related but it’s less formal than the classroom setting and so you talk about things, you discuss things, you hear things. And I’d like to think maybe it goes both ways. Where my students get to know me a little bit better.

WSS: What is the number one way to get on a teacher’s good side?

JK: That’s a really tough question for me, and part of that is my personality. For me, in addition to the other good stuff I mentioned [it’s] humor. Life is tough, school can be tough. It can be stressful, it’s true for teachers, it’s true for students. So having a sense of humor for me is a sign that ‘yeah this is important, this is serious, we have responsibilities, but hey we can still laugh along the way.’

WSS: How would you joke around with a teacher without going too far?

JK: One of the things that I do [is] I will say ‘Carmela, do I have permission to have fun with you?’ and 90% of the times, the student will say sure. And 10% of the time they’ll say ‘no you don’t’ so I’ll leave it alone . . . So that’s one way especially early on when I don’t know students well to kind of help establish a boundary . . . So part of that is reading the student and reading the classroom. For me personally, besides majoring in mathematics, I majored in sociology and I realize that’s a really weird combination, but as a teacher, it served me really well because the sociological side of me helps me to kind of read the classroom.

WSS: How would you advise students to come to you if they want a letter of rec?

JK: Early is always better than later . . . I tell students, it’s never too early to come to me. So if they come in August [or] early September and don’t need it until November [or] December, that’s not a problem . . . So if [you] come to me in August and [someone else] comes to me in September [the person who came earlier] is a higher priority . . . because [they] approached me first. That’s that fairness aspect. And I let students know that.