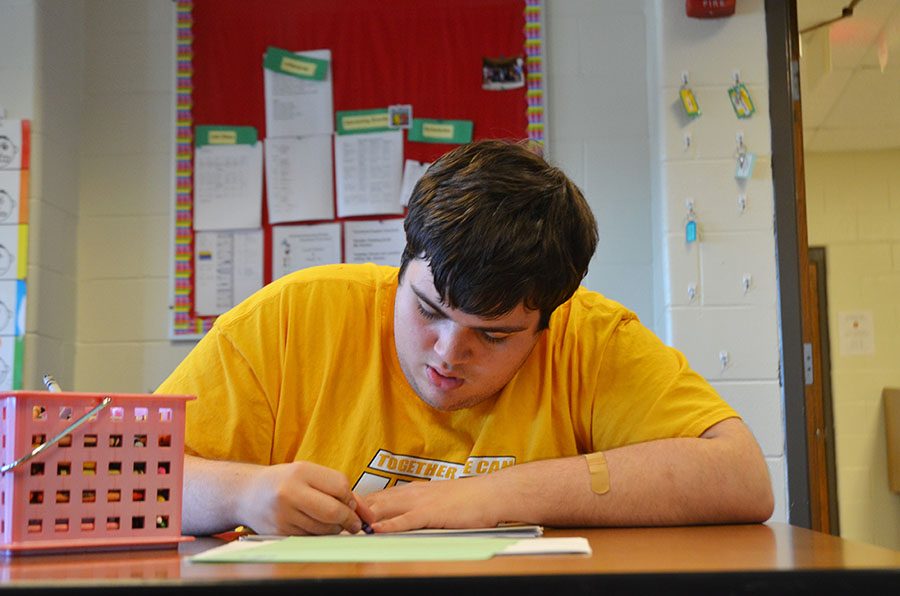 Chase Lonngren ’20 has always been interested in art, but he took his first art class at Northwest Junior High.

A thick, bright-orange crayon glides across the page. A semi-circle appears on the blank white paper, then a line. A cyclops forms, almost exactly like the one he saw in “Spongebob” last night. Chase Lonngren ’20 is doing what he does best: art.

From a young age, Chase has been interested in art, but the first time he took a formal art class was at Northwest Junior High. Since then, Chase has become more passionate about art and is currently taking Black and White Drawing here at West.

Chase’s favorite medium, however, is crayon, a unique choice that can be difficult to work with.

“His ability to create the things that he sees amazes me. His preference is to do it in crayon, and drawing in crayon is very hard,” said art teacher Christian Aanestad. “I find it very hard to make a straight clean line, but he can make a crayon drawing look like he did it with marker, and that’s very impressive.”

What Chase enjoys most about art is the creative opportunities and freedom to recreate the things he sees in his day-to-day life. He is also a fan of experimenting with diverse art styles and tools. According to Chase, art lets him “do some of everything.”

him to remember large dialogues or texts.

Much of Chase’s work is inspired by his favorite TV shows. Not only can Chase draw characters and replicate scenes from different cartoons, but he also specializes in portraits, especially ones of teachers.

“He usually picks certain characteristics of you, like my glasses and my beard,” said Special Programs teacher Steve Merkle. “He draws them in a way that does make it look like you.  It is fun to see how he interprets different individuals.”

Merkle started the Best Buddies Talent Show in 2000, and it has been a West High tradition ever since. Last year, Chase sang, danced, drew an elephant and recited a poem. In addition to performing four acts, he also designed the event t-shirts.

“During the talent show, Chase is always excited to see all the people from past years, parents, friends [and] people that he enjoys giving high fives to,” said adaptive music teacher Diane Miller. “He never seems nervous to perform, and his focus is always pretty good in front of such a large crowd.”

One of Chase’s biggest supporters is his dad, Jon Lonngren.

“I am always proud of my son,” Jon said. “Perhaps one of my proudest moments was his singing at the Best Buddies Talent Show.”

For Jon, many of his joys come from simply watching Chase interact with those around him.

“He is often focused on making sure other people are happy and has an innate ability to cheer others up,” Jon said. “My favorite thing about being Chase’s dad is watching him learn, grow and improve each day.”

Anna Haney ’19, vice president of Best Buddies, has been Chase’s friend since her freshman year. They enjoy going to the mall together and eating lots of food.

“Chase makes me a better person,” Haney said. “He makes me value friendship.”

In addition to being a good friend, people recognize Chase for being someone who is always there to help out.

“He is a kind, inquisitive [and] happy kid. He is always trying to help and enjoys spending time with his family and pets,” Jon said. “He is always busy, too, with an agenda all his own, usually involving his latest art project.”