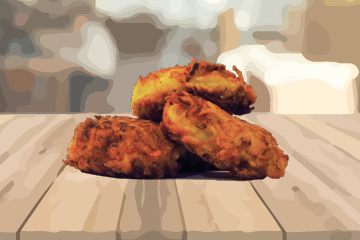 Latkes, a widely known Hanukkah food, are made largely from potatoes.

Lighting each of the nine candles on the menorah one night at a time, Evan Zukin’s family comes together to celebrate Hanukkah. On the dinner table sit a few of Zukin’s favorite treats: latkes and hamantaschen.

“My grandma makes these, they’re (hamantaschen) like triangle cookies with a little filling in the center,” Zukin said. “There’s this evil person against Jews back in the ancient days. And he always wore a triangle hat. So that triangle cookie symbolizes his hat.”

Supposedly, eating this cookie serves as an act of defiance against this man. While hamantaschen carry a large cultural significance, oftentimes latkes, described as potato pancakes, are the quintessential Hanukkah snack. In addition to making for a delicious holiday, the foods represent a deep cultural history.

“It’s the food that symbolizes the past, and to me, it’s the family coming together,” Zukin said. “It’s just a great environment that’s really important to me.”