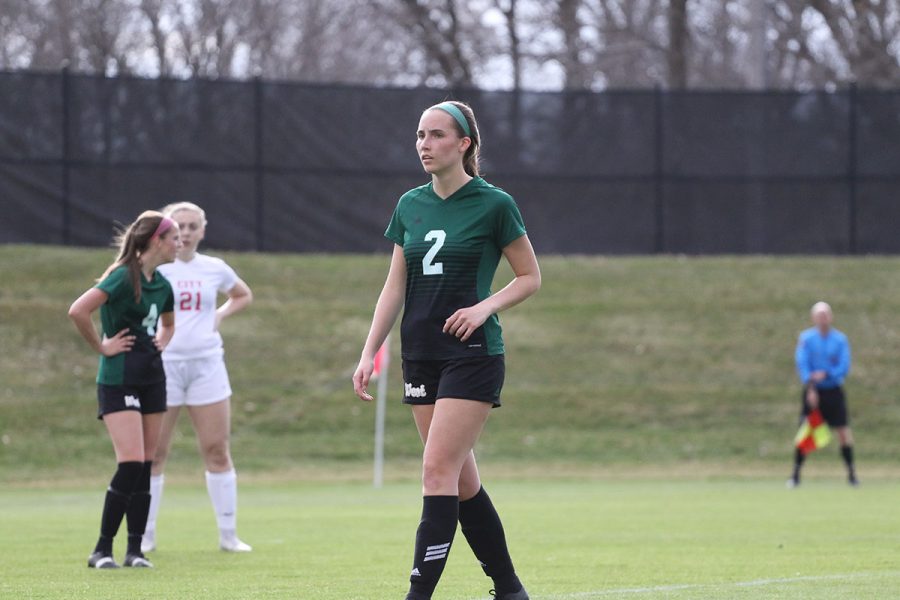 Marnie Vonderhaar ’19 walks towards the goal during the second half on Tuesday, April 9.

Soccer player Marnie Vonderhaar was interviewed for a Rising Star article in 2017. WSS checks back in with her to see how her high school soccer career has evolved since then.

West Side Story: When did you start playing soccer?

Marnie Vonderhaar: Probably when I was in seventh grade, I started playing club soccer, ISC.

WSS: Why did you choose to play soccer over other sports?

MV: I played other sports. I played tennis and I did track in junior high. I also did volleyball, so I kind of tried everything and I decided that I liked soccer best, so I decided to stick with that.

WSS: Why did you choose to join ISC?

MV: I knew that ISC was a really good club and they had really good coaches, so I joined. I also had friends in ISC.

WSS: How has joining ISC helped you improve?

MV: ISC has a lot of good coaches and I feel like I’ve really benefitted from their coaching.

WSS: Who are your biggest mentors?

MV: Well, in ISC I’ve had one coach that’s been my coach for a while named Jon Cook, and I feel like he’s really helped me improve and he’s a really good coach. I also think that my teammates on West High’s soccer really pushed me to do better and I’ve benefitted a lot from them.

WSS: How was the transition into West soccer?

MV: It was kind of hard for me because it was a lot of work and it was kind of intimidating being with the older girls who are really good at soccer, but once I was on the team, I felt really welcomed because they were all really nice and encouraging and helpful.

WSS: What are your biggest achievements in soccer?

MV: I was on varsity last year as a freshman and I also play for the Iowa ODP team. And last year, I didn’t play that much, but we made it to the state finals

WSS: You spent some time in Scotland playing soccer last summer. What was that experience like?

MV: It was a lot of fun. It was a lot different that United States soccer; it was a lot less organized. It was a really good experience and I’m just really thankful that I could go play soccer in Scotland. I learned a lot from the coaches there that had different philosophies on playing soccer. It was just interesting to see the difference.

WSS: Do you hope to pursue soccer in college. How does that affect your training?

MV: It’s just a lot of fun and you can always find ways to challenge yourself and get better. I like it a lot because I’m good friends and have formed good friendships with my teammates, so it’s really fun just to be able to play soccer with all your really good friends.

West Side Story: Who has been your biggest supporter over the last four years?

Marnie Vonderhaar: I would say my family, because my parents and my sister have always supported me throughout soccer. And I think that my parents have been really kind, and they’ve been really generous in bringing me places. And also my coaches because they help me out.

WSS: What has been your favorite moment so far this season?

MV: I’ve had a lot of fun this year, because my sister is a freshman on the team, so we spend a lot of time together. I don’t know if I have one specific moment, but definitely something with my sister. It’s just been a cool experience.

WSS: What’s the fondest memory you have from high school soccer overall?

MV: I think just overall, getting to know my teammates over the years. It’s been really fun to get to know different people and people that I would not normally meet.

WSS: What was the biggest obstacle you faced as a high school soccer player and how did you overcome it?

MV: I got injured during my sophomore year, and I tore my hamstring so I had to do a lot of physical therapy to get back. Through that, it was a really long recovery process, but I just tried to stay positive and look forward to the future and future high school seasons instead of getting down and being really negative about my situation, because it was hard to be injured and watch my teammates play and practice and I couldn’t be a part of it.

WSS: What is your biggest soccer achievement?

MV: I received a second-team all conference award my sophomore year, but I would say that’s probably about it.

WSS: When you were interviewed for the rising star profile, you talked about playing soccer in Scotland. So where have you traveled to play since then and what have those experiences been like?

MV: I haven’t gone anywhere outside of the country since then, but I traveled around different places in the United States. We went to Tennessee to play which was really fun and … it’s just really cool to get to experience those different cities and then play soccer there too.

WSS: What are you going to miss most about high school soccer?

MV: I think I’ll really miss my teammates the most because I’ve become really good friends with the people that I’ve played with for the past four years. It’s kind of crazy to think that I see them everyday after school now, but in a couple months we’ll all be at different colleges in different places, so I won’t see them as often.

WSS: And will you be playing soccer in college?

MV: I’m not going to a university to specifically play, but I’m going to Iowa next year so I’m planning on joining intramural teams, something fun.

WSS: Is there any preparation you have to do to make that transition to intramural soccer?

MV: I don’t really think that there will be a huge transition that I’ll need to do, just because it’ll be less commitment and less probably fitness that I need for intramural soccer. So I guess this summer, I’ll just try to stay active so I won’t be completely out of it.

WSS: What advice do you have for future West High soccer players?

MV: I would just say to enjoy it while you can, because your senior year comes around really fast, and there are times when a team sport is frustrating. It can be disappointing when you lose lots of games like West High girls soccer did last year, but I think it’s good for future players to keep their head up and be positive and get to know their teammates because that’s where a lot of the fun comes from, just getting to know the people you’re playing with.