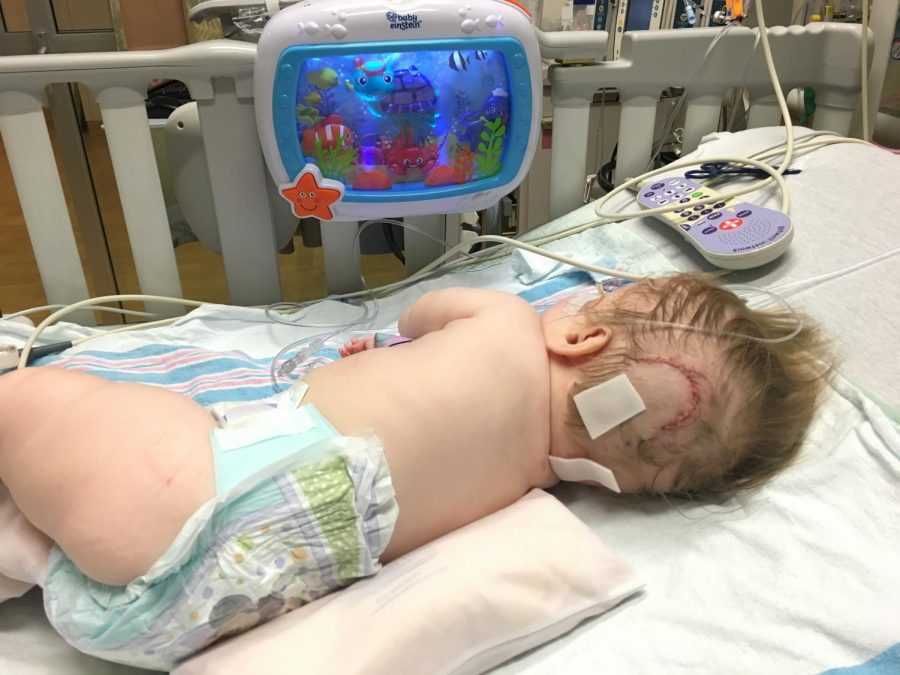 Emilia “Emmie” Boylan after the surgery for her cyst at Lurie Children’s Hospital in Chicago.

Although Emmie had recovered from the brain bleed, it wasn’t over yet. The scans from the brain bleed showed a cyst that had formed in Emmie’s brain where her cerebellum was supposed to be. However, the neurosurgeons did not notice the cyst until a few months later.

The cyst and the brain bleed made it hard for the Boylans to trust the U of I Children’s Hospital. They moved Emmie’s care to Lurie Children’s Hospital in Chicago, where there is a spina bifida clinic. The clinic made it more efficient. Even though they had to drive to Chicago, they were able to see all of their specialists in one day. When they were with the U of I, they had to take Emmie to appointments three or four times a week.

John was able to go along even though he still did not have any sick days to take. The English department was just as helpful with the cyst. They made substitute plans, lesson plans and graded his papers. He also received gifts and cash from the West High staff that they were able to use to pay for travel and lodging in Chicago.

“These are all people I now have deep professional relationships with, but back then, we were just a few months into my career at West,” John said. “It was remarkable. Every day at the hospitals, we would see parents trade off who was staying with their kid while the other had to leave for work, and for my wife and I to both be able to be there together. I don’t know how to quantify how much that meant to me.”

Every day at the hospitals, we would see parents trade off who was staying with their kid while the other had to leave for work, and for my wife and I to both be able to be there together. I don’t know how to quantify how much that meant to me.”

Emmie had the surgery for her cyst at Lurie and a follow up due to a blockage. The doctors drained the cyst with a shunt that connected to her existing shunt in a y-shape. After two years they switched her back to the U of I. They knew if there was ever an emergency they would not be able to fly all the way to Chicago.

While the Boylans have had complications with hospitals as a whole, they have received a great deal of help from certain nurses who have spent a lot of time with Emmie.

“The things that have been most helpful have been individual nurses who have made us feel like they believe in Emmie as much as we do, or they are as loving towards her as we are,” John said. “I think the biggest thing that doctors can do is be transparent, be honest about things and give you time, because it’s really hard when she’s your everything and the doctor’s like ‘Here’s the five minutes I can give you.’”