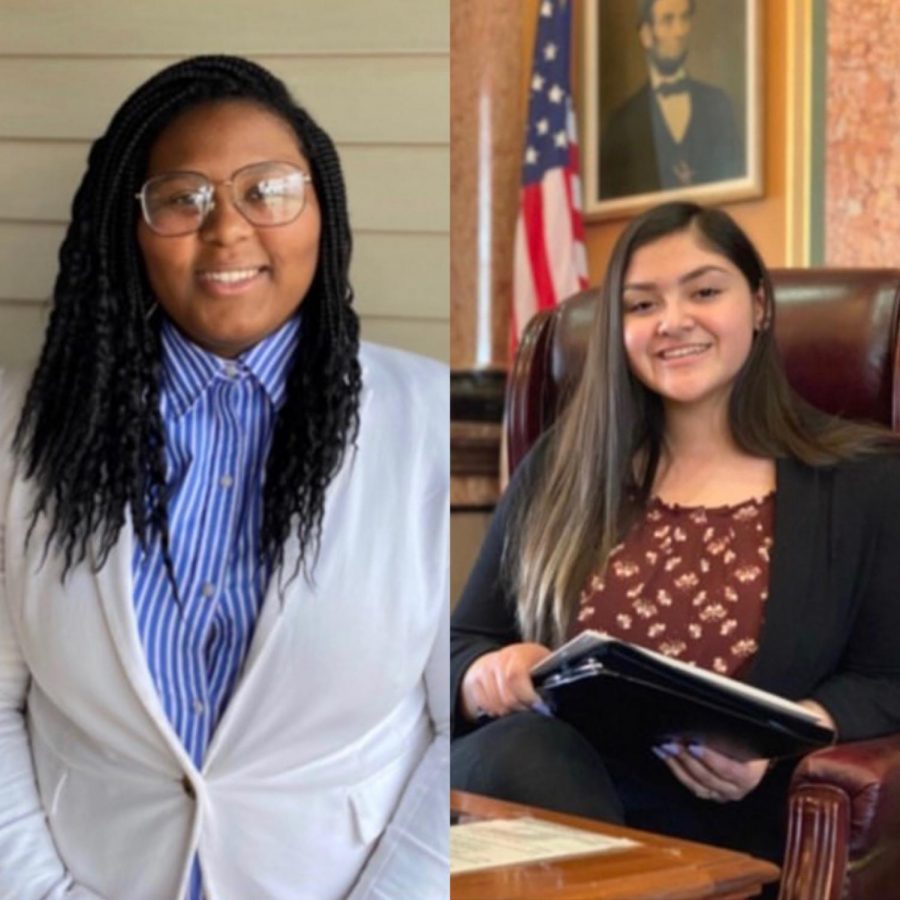 Dasia Taylor '21 is running for president with Miriam Aguirre Ferrer '21 as vice president. Get to know them with the Q&A below.

What prompted you to run?

“As student leaders of minority backgrounds, we realize that minority voices are underrepresented. Although we knew that we could make an impact individually, we realized that joining forces meant that we would make a bigger impact.”

What makes you qualified for this position?

“I, Dasia, have participated in a plethora of clubs at West, the majority of which include leadership positions. For example, President of the Black History Game Show, Team leader of Walk it Out, and more.”

“I, Miriam, have also participated in several clubs at West and I have served one term as iJAG Vice President and two terms as iJAG President. I am also the Leader of Team Latin America in Walk It Out and participated in West High’s Diversity Committee.”

If you have been in the student senate before, what have you learned from being involved and how will that inform your leadership if elected?

“In our time on Student Senate, we have learned that even though Student Senate does value student opinions, they aren’t often valued to the extent that they could be. We decided that we wanted to give students a greater opportunity to be heard. If elected, we would work to bridge the divide between Student Senate and students.”

What would be your main mission if elected?

“Our main goal for our administration is to promote equity and celebrate diversity among all of West High’s culture. As minority students at West, we have insight into what it’s like to not have your voice heard. So, we want to use our position to encourage students to use their voices.”

How would you make being an involved, successful student at West High more accessible for students of all backgrounds?

What makes you proud to be a West High student?

Dasia: “I’m proud to be a West High Trojan because I’ve known what it’s like not to be one. In the transition from junior high to high school, I moved, and was no longer in the Iowa City School District. I attended Clear Creek Amana for three months and quickly realized that I didn’t belong there and that I never would because they didn’t value diversity like we do at West. From there, I fast tracked my open enrollment process and couldn’t wait to begin a new chapter of my high school career. I connected with people that encouraged me to be the best that I could be and connected with teachers that are loving and understanding. I am so very proud to be a part of such a close knit community of amazing people that treat each other like family.”

Miriam: “I am proud to be a West High Trojan because I feel that as a student of color my experiences and my opinions are heard, and above all, valued. When I look back at my high school experience, all the memories that come to mind are fun and cherishable. With memories like, participating and organizing Walk It Out for Team Latin America, speaking at my first MLK day session, and waking up early for morning weight lifting for the track team, who wouldn’t? I am, and will always be proud of who I am, what I have accomplished, and of course being a West High Trojan.”

What areas of West could use improvement, and how do you plan to improve them?

What’s one thing your peers should know about you?

Dasia: “I think my peers should see me as relatable. I’ve been involved in a plethora of extracurricular activities which has allowed me to connect with people from all aspects of West. Science? I participated in the science fair. Culture? I’m a team leader for Walk it Out. History? President of Black History Game Show. You name it, I got it. Overall, I want everyone to see some of themselves in the person that’s representing them.”

Miriam: “I think that my peers at West see me as quiet and reserved; however, I am not, nor will I ever be. I am not afraid to use my voice to help them find theirs.”

What do you believe the role of the student senate president is?

“I chose to believe that limiting the role of the Student Senate President is a grave understatement. There are several aspects that make up a President, including, but not confined to, being able to lead the student body, providing support systems for ALL students, encouraging ALL students to get involved, but most importantly helping ALL students find their voice.”

I, Dasia Taylor, along with Miriam Aguirre Ferrer, would like to declare our candidacy for President and Vice President of Student Senate.

Our main goal for our administration is to promote equity and celebrate diversity among all West High cultures.

Our secondary goal is to fix the disconnect between Student Senate and the students of West High. In order to fix this problem, we plan to establish a safe space where students can voice their honest opinions without fear of judgment. We encourage students to voice their opinions, thoughts, and concerns with us.

Miriam and I promise to keep the interests of the student body at the forefront of our decisions.

Together, Dasia and Miriam have completed an equity-focused workshop that includes a group of teachers and students who come to a mutual understanding of the racial disparities at West, three times. We also lead our cultural groups in West High’s multicultural fashion show, Walk it Out. Dasia has served on many ICCSD committees including the Comprehensive Equity Plan Development Group and the School Safety Advisory Committee. Miriam has served two terms as iJAG President and was a valuable member of West High’s Girls’ Track and Field team.

In the three short years we’ve spent at West, we recognize that there are limits in what we can do individually, but together we can invoke change that can benefit the student population.