Claudé Clark ’22 is part of the Mayan tribe, which originated in Central America. According to the Iowa Department of Education, he’s part of the 0.003% of students in the district that identified as Indigenous in 2019. Because of this, Clark feels it can be difficult for Indigenous students to make friends with similar experiences or to form a community.

“Growing up, it was really lonely. First, I lived in a white town, so that didn’t help. Now that I moved to Iowa City, it’s a lot better. I have some friends who are Latino, but that’s different from being Indigenous. It is a different culture,” Clark said. “I still am looking for my place to click in, and it feels like I haven’t really clicked into a place yet where I can truly call home.”

Clark was adopted by a white family and lived in Illinois for much of his childhood before moving to the ICCSD. While he believes that his race didn’t have an effect on how other people treated him, it did affect his perception of himself.

“I would get a lot of compliments about my skin … but I guess for me it was difficult to accept because I didn’t want that. I just want[ed] to look like everybody else because no one … around me looked like me,” Clark said.

I still am looking for my place to click in, and it feels like I haven’t really clicked into a place yet where I can truly call home.”

Without knowing anyone from his culture or of Indigenous descent, Clark has had to learn about his culture by himself using resources he finds on the internet.

Growing up with Indigenous parents, Loren Wolf ’23 has had a different experience. He stays connected to his Indigenous roots by practicing the cultures of the tribes he descended from. To do this, he is learning the Navajo language from his mother’s side of the family and takes part in many traditions of the Meskwaki at the reservation in Tama, Iowa, where his father lives.

“My dad started putting me in something called a powwow, which is basically just honoring the relatives by doing specific dances … I used to do those a lot [before the pandemic],” Wolf said.

According to Clark, being able to partake in these kinds of experiences can be important and empowering for people of Indigenous descent.

“The Meskwaki nation is [called] the Sac and Fox tribe of the Mississippi in Iowa … They have their own reservation, and they have their own community,” Clark said. “I really want to go down there and … experience what it’s like to be Native American, even if they’re not exactly my tribe.”

While Clark values cultural experiences, he thinks it is important that representation comes with the right intentions. He believes there is a fine line between cultural appreciation and appropriation, with one commonly appropriated term being “two-spirit.” 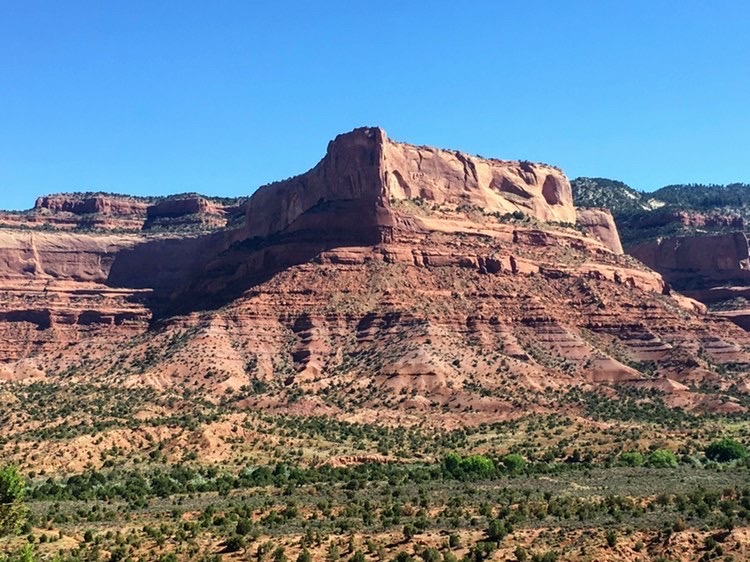 Gallery|5 Photos
Photo courtesy of Loren Wolf '23
The Lukachukai Mountains in Arizona are located on the Navajo Nation.

The term signifies a member of a tribe who identifies as neither a man nor a woman and has many unique roles in the group. However, some non-Indigenous members of the LGBTQ+ community have begun using the term to describe themselves.

“It kind of makes me upset whenever someone says, ‘Oh, I’m a two-spirit’ … when they’re non-Indigenous. I don’t get mad at them, it just makes me sad that they think this is okay. Some part of their brain thought, ‘This is okay to call myself this, to take this from the different tribes, different cultures, and put it on me when I don’t know anything about what that word actually means,’” Clark said.

Clark attributes the cultural appropriation and microaggressions he has seen to a lack of knowledge about Indigenous peoples and their cultures.

“Eventually, people will have respect for us, but [currently] a lot of people are just ignorant,” Clark said. “They just don’t know. They aren’t taught.”

Eventually, people will have respect for us, but [currently] a lot of people are just ignorant. They just don’t know. They aren’t taught.”

A common cause of confusion is what terms should be used to refer to Indigenous peoples. This varies around the world, according to Jacki Thompson Rand, a professor of history and Native American and Indigenous studies at the University of Iowa. Indigenous peoples are referred to as Aborigine in Australia and as the First Nations in Canada. In America, however, there is no universally accepted term for Indigenous peoples.

“It’s a little bit different for everyone but it’s mostly like keep away from slurs, even if they don’t sound like slurs to you … A good way to just be safe would be to call them Indigenous or ask what tribe they’re from,” Clark said. “I think it’d be fine to just ask them, ‘Okay, do you prefer to be called Indian or whatever?’ … It is better someone asked than for us to be offended.”