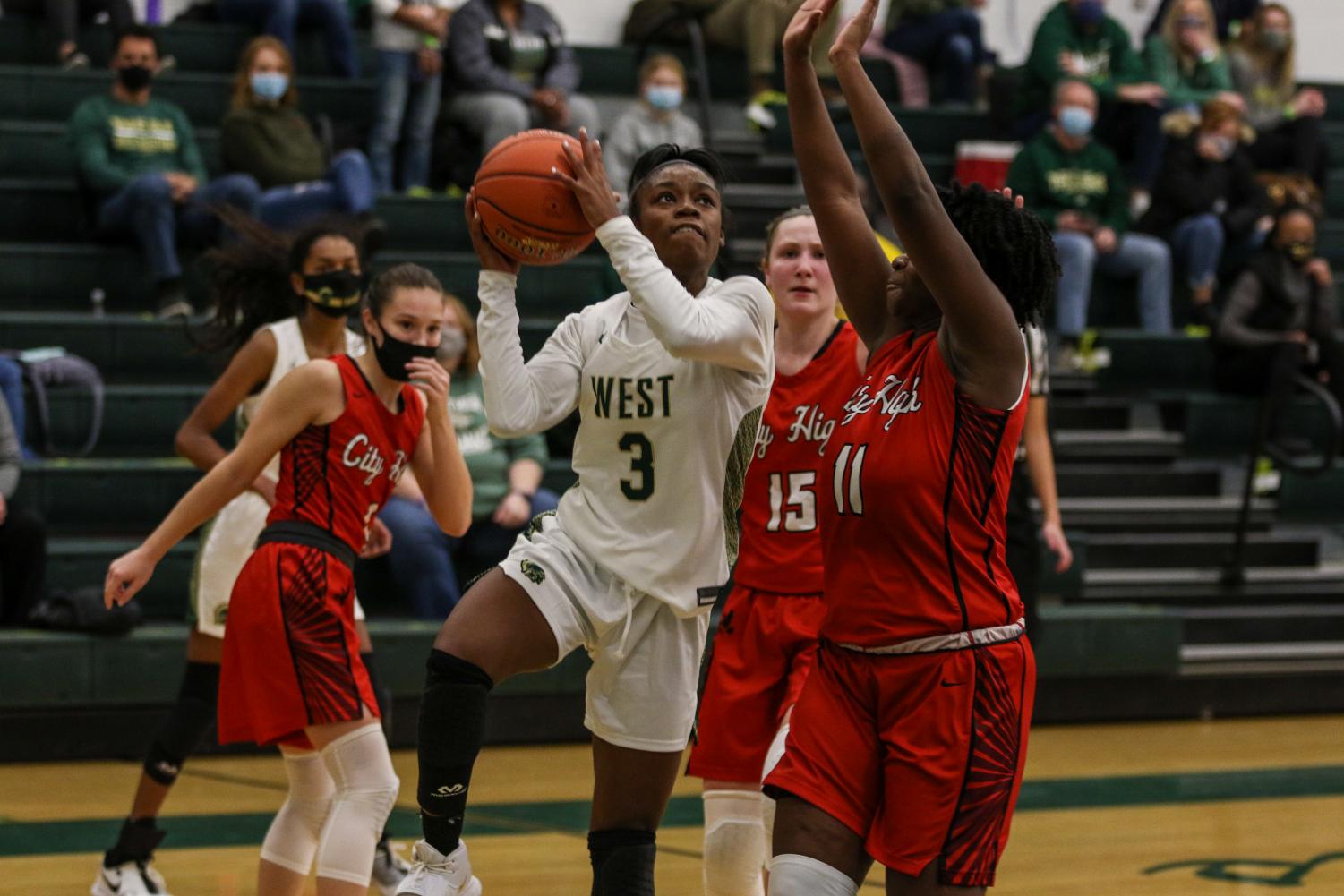 Matayia Tellis ’21 goes up for a layup between two City High defenders on Dec. 18. (Owen Aanestad)

Matayia Tellis ’21 goes up for a layup between two City High defenders on Dec. 18.

After not being able to practice or play while in fully-online learning, the girls and boys basketball teams split with cross-town rival City on Dec. 18.

With the socially distanced benches in place of a whole side of the gym’s bleachers as soon as you walked in, you could tell that this year’s crosstown matchup between City High was going to be like no other.

The girls basketball team defeated the Little Hawks 75-63 behind 20 points from senior Audrey Koch in the team’s season opener on Dec. 18. BJ Mayer’s Trojans debuted not only their new uniforms but a couple of new options off of the bench and the long-awaited return of talented point guard Emma Ingersoll-Weng ’22.

After only five practices it was evident that both teams were a little rusty but West was able to capitalize early on some of the Little Hawk’s mistakes and go on a 10-2 run with a minute left in the first quarter to retake the lead 14-9.

Back to back Matayia Tellis ’21 buckets stretched the Trojans’ lead to 7 with 5 minutes left in the first half. Mayer’s high tempo offense kept the Little Hawks on their heals the rest of the half, the Trojans were able to penetrate and dish for open shots and push the ball up the floor for multiple fast breakpoints. Going into the half West led 38-28.

Sitting comfortably up by 10 coming out of half the Trojans got too comfortable and watched their lead slip away throughout the third quarter. A 6-0 City High run to put the Trojans up only by three with three minutes left in the third quarter. As the West High defense tried to find a way to stop City High’s Kelsey Joens ’23 they found themselves down by one going into the fourth quarter, 51-52.

With the help of some frontcourt pressure and fresh legs off of the bench, freshman Lucy Wolf and Melae’ Lacy got a taste of not only the cross-town rivalry but varsity basketball as West went on a 16-2 run with four minutes left in the fourth up 67-56. Koch’s experience against City allowed her to put up 11 of her own in the fourth quarter alone to seal the deal for game one of the night.

The now 1-0 girls basketball team will be back in action on Tuesday, Dec. 22 at home versus Linn-Mar. 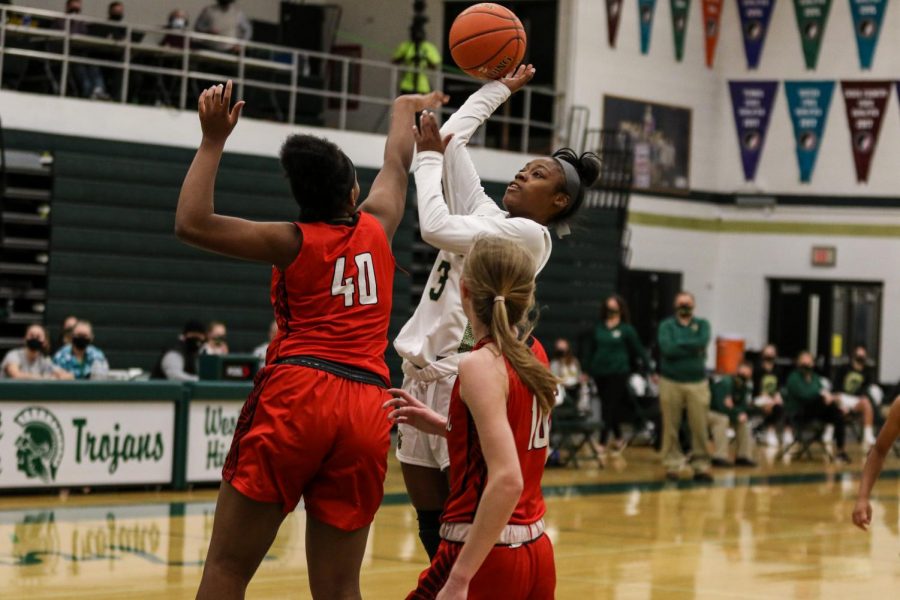 After graduating their full starting lineup last year, the boys basketball team had a lot of ground to make up in a short amount of time. After not being able to work out in the offseason together and most recently not being able to start practicing together until Dec. 12 there were more than a few obstacles for Steve Bergman’s squad to get to the point they wanted to be at when their season opener rolled around.

The boys basketball team showed a lot of potential in their season opener against cross-town rival City but some costly turnovers late in the game led the Trojans to fall short in overtime 71-77. With the help of junior transfer Pete Moe’s 41 points, West put up a good fight against a City High team filled with varsity experience.

Point guard Christian Barnes ’22 settled into his new role early on after the Little Hawks went up 7-3 early into the first quarter. Barnes’ quick drives to the hoop for layups and dishes was about all that was working for the Trojans offense throughout the first quarter. As they struggled to find an answer for City High’s Jamari Newson’s ’22 three-point shooting West found themselves down 13-19 at the end of the first.

As the boys basketball team still tried to find their new identity the second quarter was filled with a lot of the same, including struggles to find a rebound on the defensive side of the floor. Barnes finished the half leading the team with 10 points as the team went into the half down 26-32.

The Trojans scored the first eight points of the second half to take a 34-32 lead and somewhat of an offensive grove. Newcomers Kareem Earl ’24 and Savion Taylor ’23 made their Trojan debuts count with some big blocks from Earl and a game-opening three from Taylor. Moe got his first taste of the West High rim after he slammed one home with 2:44 left in the third quarter to cut the Little Hawk lead to one, 40-41.

City High’s quick and aggressive offense then went on a 15-5 run to end the third quarter and thought they had sealed the deal on their second win over the Trojans in the past 11 years. Moe had other ideas, the 6-foot-8 playmaker knocked down two big three’s and an and-one to tie the ball game at 62 with 3:11 to go. As time winded down, the two teams put together some defensive stops and missed some possible game-clinching free throws but found themselves tied at 65 at the end of regulation.

Brennan Swayzer’s Little Hawks came into overtime ready to play as they scored seven straight to go up 67-72 with 1:46 left in overtime. Moe’s three to make it 71-75 wasn’t enough. West fell to 0-1 on the year after losing 71-77 to City High. The two teams will meet again Jan. 22 at City High.

As for Steve Bergman’s squad, they will be back in action on Tuesday, Dec. 22 at Linn-Mar in hopes of finding some better team chemistry to match the scoring abilities of Pete Moe. 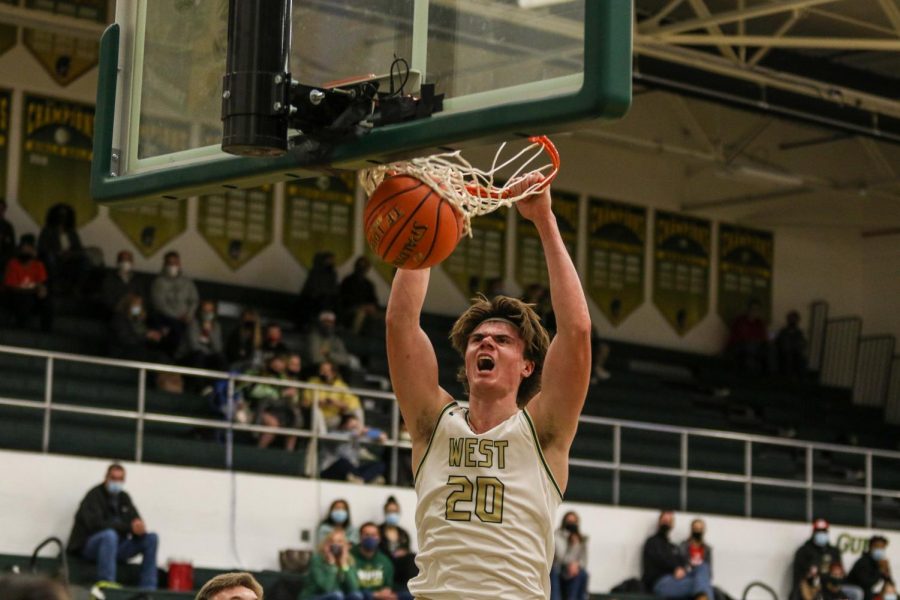