A multitude of factors including challenging course loads, extracurricular participation and a culture of competitive excellence at West converge to make the college application process a major stressor for students. Additionally, students are tasked with dividing their time in a way that allows them to follow their passions, but also pursue activities which colleges will approve of.

Maggy Owens ’22 is one such student who finds striking such a balance challenging.

“It does get a bit stressful because I feel like I want to do all of this stuff just to make me look better on the applications, but there’s just not enough time in a day. I burn out really quickly,” Owens said.

Owens’ schedule includes several AP classes and extracurriculars, such as Theatre West and a mental health club she founded. On top of that, she also works a part-time job and is preparing for the ACT. Even though Owens is interested in many of her chosen classes and activities, she also believes they are important to show colleges she is a well-rounded student. Still, she is concerned that this list may not be long enough.

“I just feel like I’m running out of time, and I haven’t done enough at West and I just won’t look good on the college applications,” Owens said. “So as a senior, I feel like I’ve wasted all that time.”

“The most stressful part about it is if you didn’t [do] enough or [have] regrets [about] what you could have done better … because it’s not really anything you can change at that point,” Bedell said.

With a motto of “Where Excellence is a Tradition,” the competitive environment at West, where comparison with peers is commonplace, can be a catalyst of student angst.

“You hear kids around you all the time talking about these scholarships they’ve done outside of school, activities and programs and things that they’re the leaders of, and I don’t know if I’ve done enough of those things,” said Amira Qidwai ’22.

Qidwai is planning to study international relations and has focused on taking higher-level social studies classes throughout high school. While she is confident that she has shown proficiency in this area, she is still worried about staying on the same level as her classmates.

“I haven’t taken any AP math courses or science courses which kind of gets to the heart of the issues at West because people would say those are the hardest ones and that you weren’t really in that high-level AP group unless you’re taking AP Chemistry, AP Calc or something,” Qidwai said.

AP English Literature teacher Nate Frese has taught at West for 23 years. He has frequently witnessed students taking on more than they can manage and the costs of becoming overloaded with work.

“I think you have to almost [become overwhelmed] to realize that [you] can’t be everything to everyone all the time, and especially to yourself. It’s okay not to have 15 things on your plate and not be working towards this kind of uber child all the time,” Frese said.

As college become even costlier, with students weighed down by thousands of dollars in debt upon graduation, applying for scholarships is another key part of the college process.

Josie Schwartz ’25 is already worried about the cost of college. Even with the prospect of a reduced price of attending her dream school, Mount Holyoke, it’s still too expensive.

“Is it worth it to go to a college that might make me broke for the rest of my life?” Schwartz said.

Seeking out scholarships can be yet another element that heightens student stress, as is the case for Jade Ritchey ’22.

“You’ve got to write an essay [for scholarships], you got all these other things and I don’t even know where to turn and where to look,” Ritchey said. “I don’t want to go through the mental battle of it every time on top of APs and my other classes that I need to get done.”

Students are also burdened by how impactful choosing a college and major can be. Having to both select an institution which best suits their needs and decide a discipline of study can overwhelm students, who fear they could make the wrong decision.

“I feel like just jumping into a totally different environment with no direction would not be good for me,” Ritchey said. “I don’t want to waste money taking classes and things [to] end up finding out my junior [or] senior year of college that this is not what I want to do with my life.”

Choosing a college has been difficult for Owens, who is deciding between the University of

I’m just terrified I’m going to make the wrong choice and wish I had somebody there to just push the button for me and tell me which one it will impact my future in the most positive way. ”

Iowa and the University of Northern Iowa. Planning to major in psychology, she has found both of the colleges’ programs impressive and is concerned she will choose incorrectly.

“I’m just terrified I’m going to make the wrong choice,” Owens said. “[I] wish I had somebody there to just push the button for me and tell me which one it will impact my future in the most positive way.” 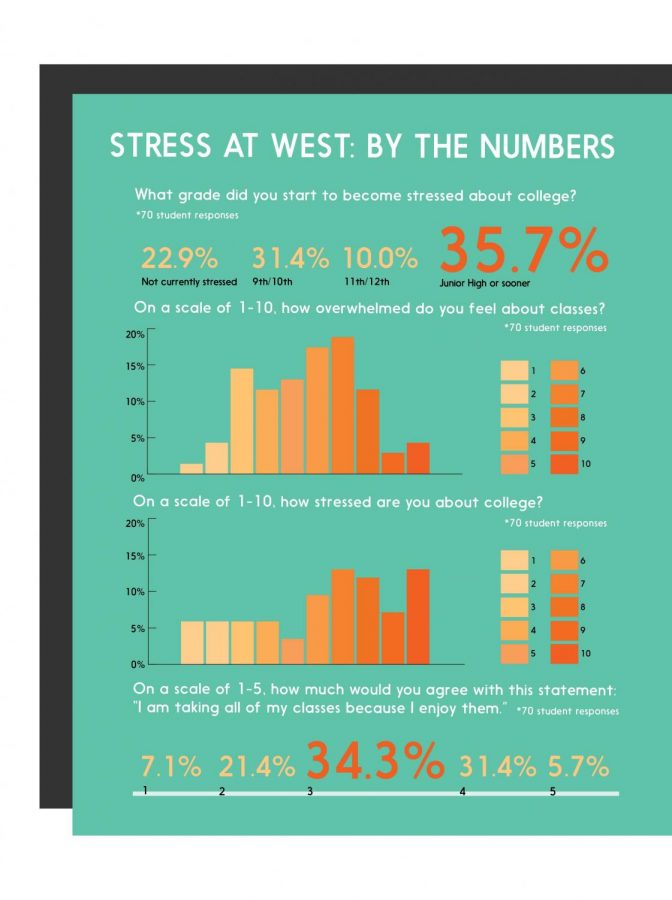