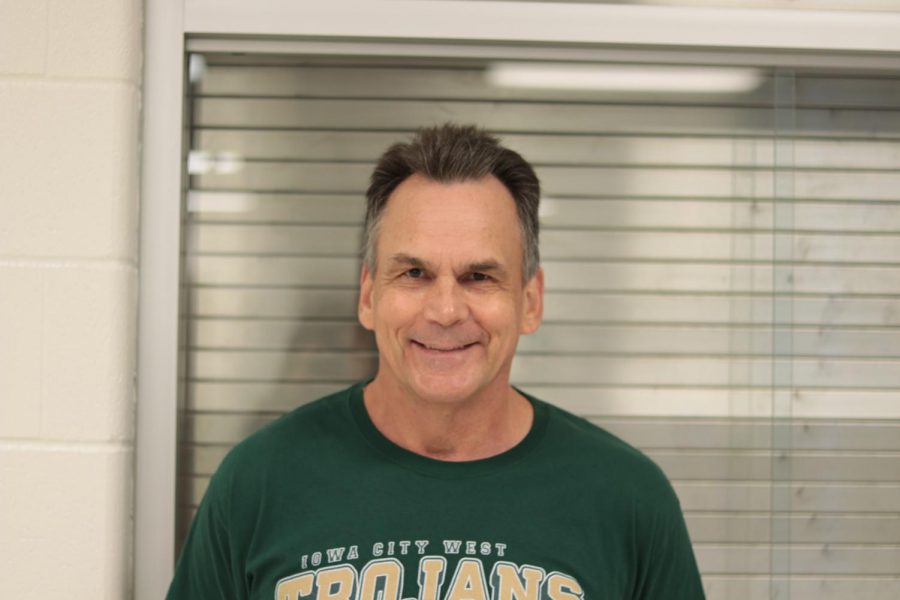 When the opportunity to teach at West arose, Michael Clark was ready to take it.

Many teachers who end up at West come for job opportunities, but social studies teacher Michael Clark had a unique reason to want to work here. After studying political science and economics at the University of Iowa, Clark moved to Texas where he taught for 30 years.

However, it had always been Clark’s dream to teach at Iowa City West High School. Just when he had decided to retire, he was met with the opportunity he’d always wanted.

“I’d been in Texas enough years where I could retire and come back home, so that’s what I did,” Clark said. “There was really only one school I wanted to come back to in Iowa City and somehow I was lucky enough to end up here. That was my dream.”

I was lucky enough to end up here. That was my dream.”

Clark teaches AP Economics and one of the main reasons he’d always wanted to teach at West was for its inclusive environment.

“My favorite thing about West is how it’s so inclusive,” Clark said. “The environment here is that whoever you are, you’re accepted, whoever you love, whatever you believe.”

My favorite thing about West is how it’s so inclusive.”

Clark believes that acceptance is one of the key pieces to creating a better learning environment. In his past years at different high schools, he’s noticed how big of a difference inclusion can make.

“When kids feel like they’re ostracized, they either don’t come to school or they cause a lot of problems,” Clark said. “Here, you can already tell that everybody is so welcoming. There’s such an emphasis on maintaining standards that you make sure that you’re doing it in a positive way, and that your learning strategies are adapted for everybody in the classroom. I’ve had services here on subjects that I never had anywhere in 30 plus years of teaching.”

For a short period of time, Clark was teaching online and facing challenges unlike before, including preparing his students for a virtual AP exam

“It was all AP, you’re trying to get people ready for an AP test in a format that you’ve never had before and get people adjusted to learning on the computer,” Clark said. “But I think we did a good job and did the best we could under the circumstances.

Now being back in person, Clark is excited to be able to watch students learn and make impacts on their lives.

My favorite thing about teaching is when kids get the concepts, and you see the light bulb go off and kids have success that they didn’t think they could achieve.”

“My favorite thing about teaching is when kids get the concepts, and you see the light bulb go off and kids have success that they didn’t think they could achieve,” Clark said. “Whether it’s getting a five on an AP test, or being able to go home and actually explain things to their parents and have a conversation about it, it’s the connections that you make.”