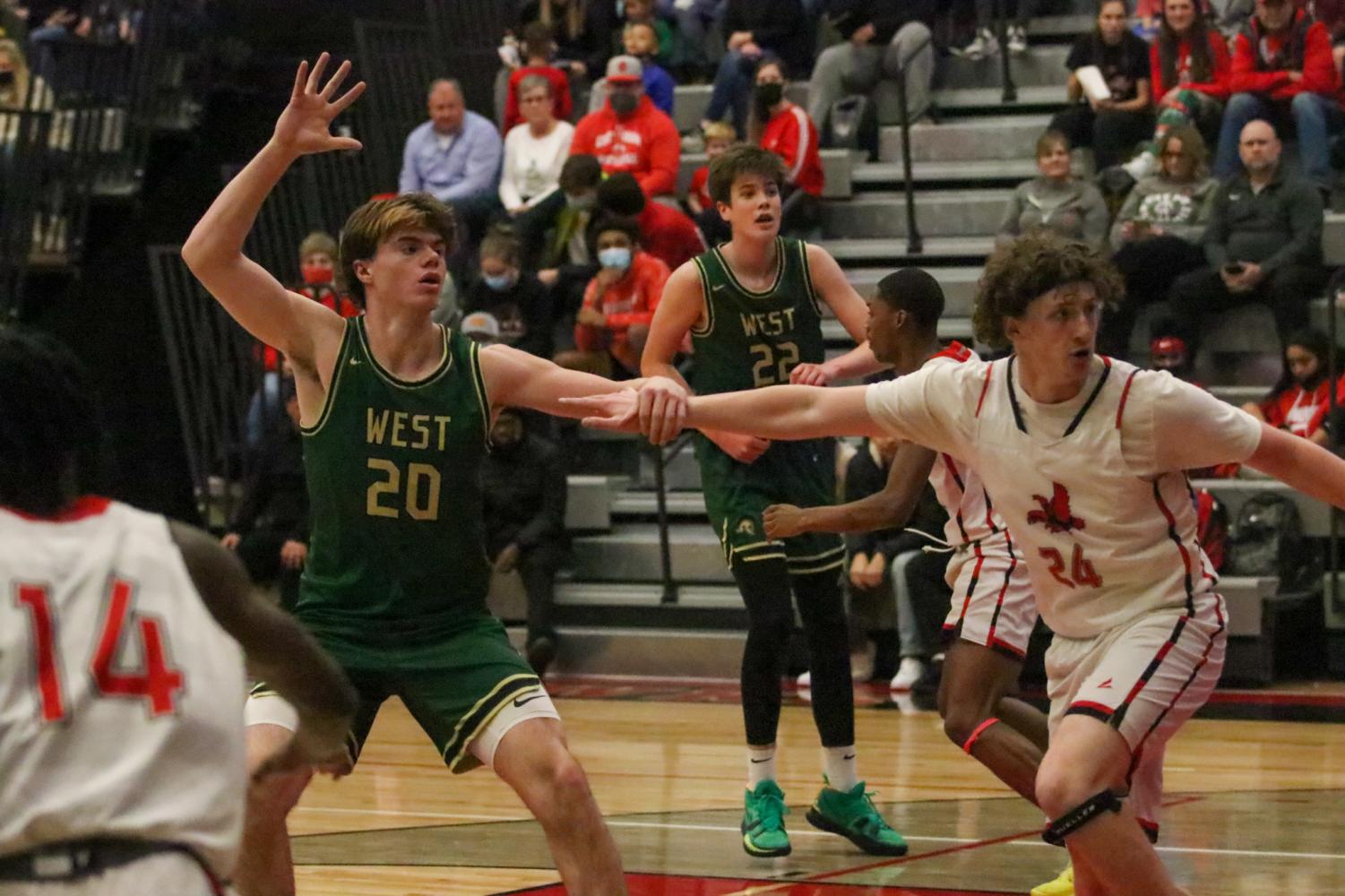 Pete Moe ’22 opens up for a pass during the second half of the game against City on Dec.17. (Zoe Smith)

Pete Moe ’22 opens up for a pass during the second half of the game against City on Dec.17.

The girls and boys basketball teams traveled to City High to play them in a double header on Dec. 17.

Girls falls to the Little Hawks

The energy was electric last night as both of the Trojan basketball teams traveled to meet with cross-town rival City High in their brand new gym. The girls game was first and although senior and starting guard Emma Ingersoll-Weng was out with a torn ACL, that didn’t stop Mayer’s squad from bringing the intensity from the start.

City High being ranked number two and West being ranked number four, there was no doubt this was going to be a fast-paced game. Anna Prouty ’23 showed up on the court from the beginning putting up the first 8 points for the Trojans. Melae’ Lacy ’24 and Avery Vest ’22 added some three-pointers to the board, setting West at 20-17 against the Little Hawks by the end of the 1st quarter.  It was a quick and close game throughout the first half but the Trojans had trouble keeping the Little Hawks from driving the ball down the court, setting the Trojans trailing 36-25 at halftime. Tate led the girls in this game with a total of 18 points.

West came out of the locker room ready to fight with juniors Keiko Ono-Fullard and Meena Tate running the court making the Trojans trail behind City 53-45 at the end of the 3rd quarter. Ultimately the Little Hawks put up 65 points and left West trailing at 52 points. West put up a good fight against City High junior Kelsey Joens who had 22 points for the Little Hawks.

Catch the 5-1 Trojans playing against the Lions at Linn Mar on Tuesday, Dec. 21. 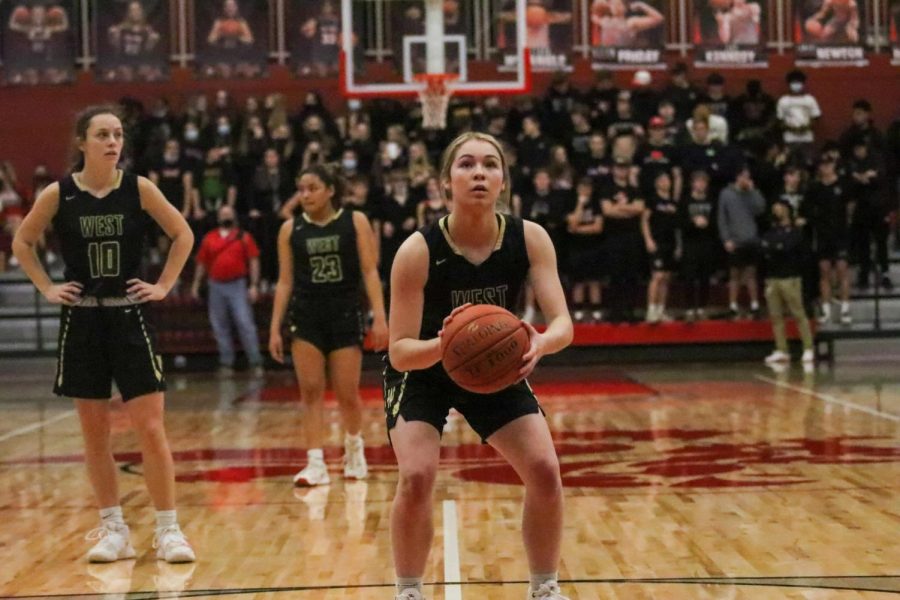 The crowd’s energy didn’t cease after a tough loss for the Trojan girls; it only fueled the boys fight as the undefeated team lit up the Little Hawk court. There was no stopping the boys team in their battle for victory last night as they caged the Little Hawks in a 75-62 victory.

West boys started off the game letting City High get the first points on the board, but Pete Moe ’22 and Savion Taylor ’23 put two three-pointers on the board and gave West an early lead. By the end of the first quarter the Trojans led the game 21-15. It did not stop there. Moe had two dunks early on in the second quarter and Jack McCaffery ’25 had a quick layup off a pass from sophomore Kareem Earl. This put the boys ten points ahead of the Little Hawks 39-29 at halftime. As the crowd was getting loud on both sides the Trojans stayed locked in at the start of the second half. Earl had back-to-back buckets and with the help of his teammates, they ended the third quarter 58-46. The Little Hawks tried to keep up with the boys, but there was no stopping them last night.

Moe scored a total of 30 points leading this otherwise young team to victory. Sophomore Jacob Koch put 16 points on the board followed closely by Jack McCaffery with 14 points. There was no stopping this team last night and they remain undefeated. You can catch the teams playing again on January 21, which will count as a Mississippi Valley Conference game.

In the meantime, the boys face off against the Linn-Mar Lions at home on Tuesday, Dec. 21. 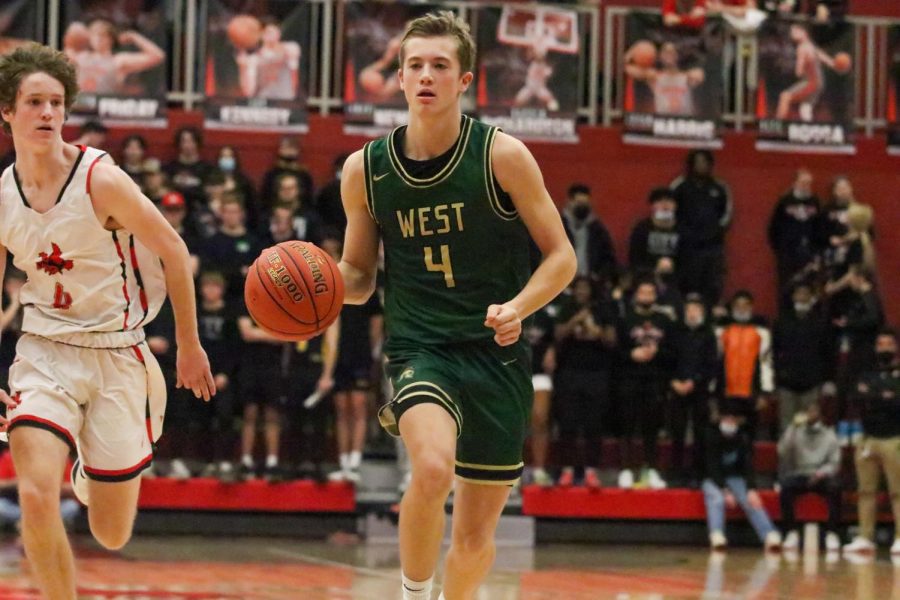 Gallery|10 Photos
Zoe Smith
Jacob Koch '24 dribbles the ball straight down the court in search of the net on Dec. 17.
Leave a Comment