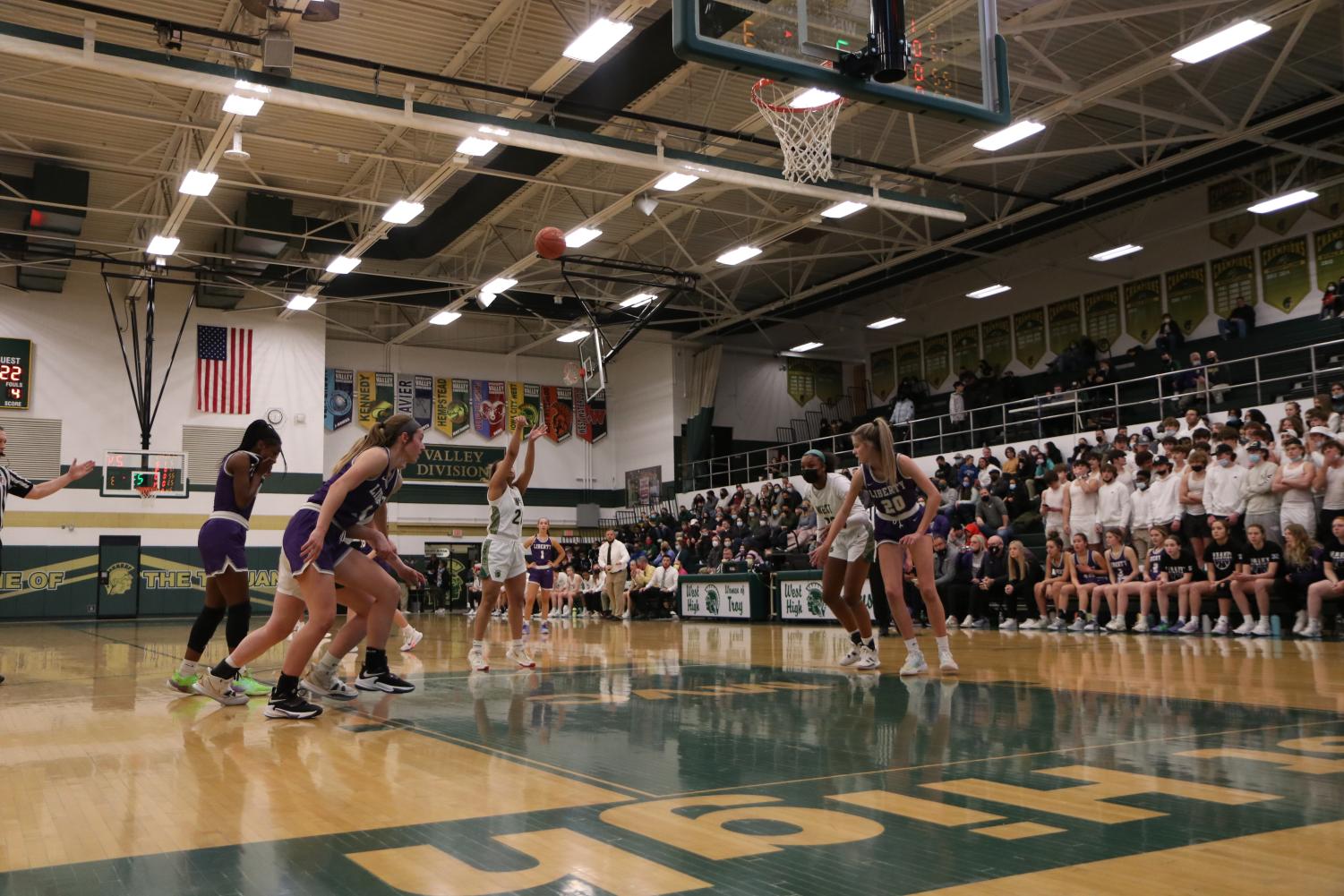 Keiko Ono-Fullard ’23 makes a free-throw against Liberty on Feb. 4.

The Trojan basketball teams faced off with Liberty High for the second doubleheader of the season on Feb. 4.

The girls basketball team sent off their three seniors, Ana Nester, Emma Ingersoll-Weng and Avery Vest, with a win as the Trojans took control of the Lightning 63-53 on senior night in the first game of the doubleheader on Feb. 4.

The game started with Ingersoll-Weng at the Trojans’ end of the court to trade two points with Liberty. Ingersoll-Weng tore her ACL back in December during the game against Liberty.

“[My season was] not as I expected, but I am still having fun with my teammates and really enjoying it even though I can’t play,” Ingersoll-Weng said. “It’s hard to be a leader on the floor but being a leader on the bench is going the best [it can].”

The Lightning pulled ahead early in the first quarter and held the Trojans to just three points on the scoreboard until the 3:00 mark in the first quarter when Lucy Wolf ’24 found Meena Tate ’22 for the layup to make it 5-8 Liberty. Anna Prouty ’23 gets the rebound with 1:32 left in the first quarter 7-10 Liberty. Free throws from Tate tied the game at 13 with 6:49 left in the second quarter. Keiko Ono-Fullard ’23 and Wolf each score from inside the arc to take over the lead against Liberty 17-15 with 5:39 left in the opening half. Wolf finds an open lane for a layup to once again tie the game 30-30. Liberty’s Avery Gaudet ’23 makes a three-pointer for Liberty to have the lead at the end of the first half 30-33.

Late in the third quarter, junior Carolyn Pierce’s and-one tied the game at 37. Pierce then made her free throw to make the score 38-37 West. Wolf goes coast-to-coast for an easy layup to make the score 43-44. Moments later, Tate drops in a three-pointer to put the Trojans ahead 48-46 with 4:49 left in the game. A two-pointer from Ono-Fullard widen the score gap between Liberty 58-51 West with 46 seconds left. With technical fouls within the last minute of the game, the Trojans improved their score to 63-53 to secure their second win against the cross-town rival this season. Tate led the Trojans by finishing the night with 26 points, and Ono-Fullard finished with 12 points.

The Trojans will be back in action next Tuesday at Cedar Rapids Jefferson. 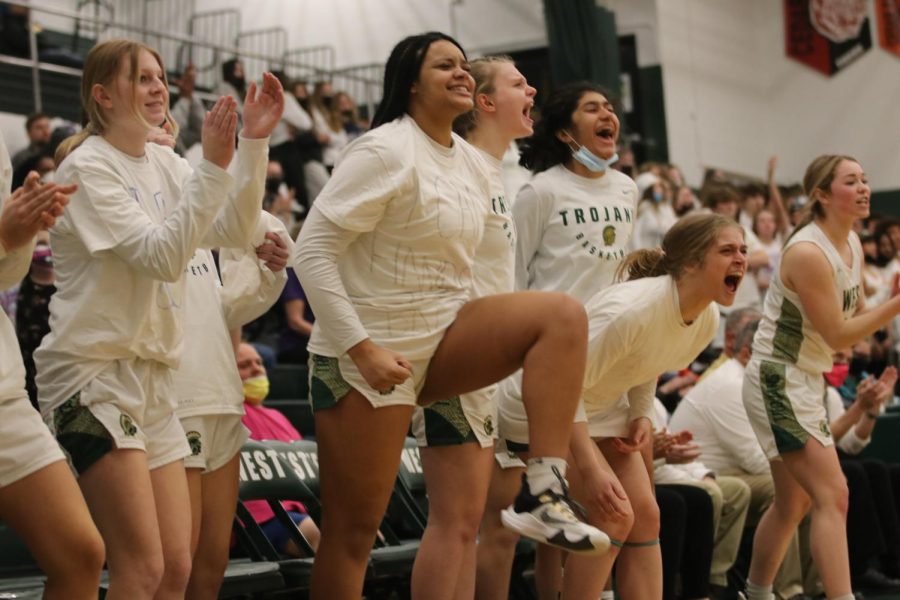 Gallery|10 Photos
Zoe Smith
The girls' bench cheers on their team during the second-half against Liberty on Feb.4.
Leave a Comment

Boys fall to Liberty for first time ever

The electricity from the girls game didn’t stop as the boys game started up. The Trojans took the court against the Lightning in a fierce and close game.

The Trojans took no time to get warmed up when the clock started, they brought the heat. Ben Hoefer ’23 putting up a three-pointer in the first minute putting West in an early but narrow lead 7-5. They kept up the energy and played a solid game leading by one point, 26-25 at half-time. Pete Moe ’22 leading with 13 of those points. Da’shon Fisher ’23 from Liberty led his team with seven points.

“Hector” the Trojan made an appearance at halftime to keep the energy that was on the court continuing in the student section.

The Lightning came out strong in the third-quarter ending in a three-point lead against the Trojans, 45-42. The Trojans kept fighting in the final quarter. The Lightning’s Christian Barney ’23 put up 13 points in the second half for Liberty. With a nail-biting final minute, Kareem Earl ’24 missed the free throw to tie the game up with 3.5 seconds left. The Lightning defeated the Trojans 58-55.

The 13-4 Trojans will be back at home on Tuesday facing off against Cedar Rapids Jefferson. 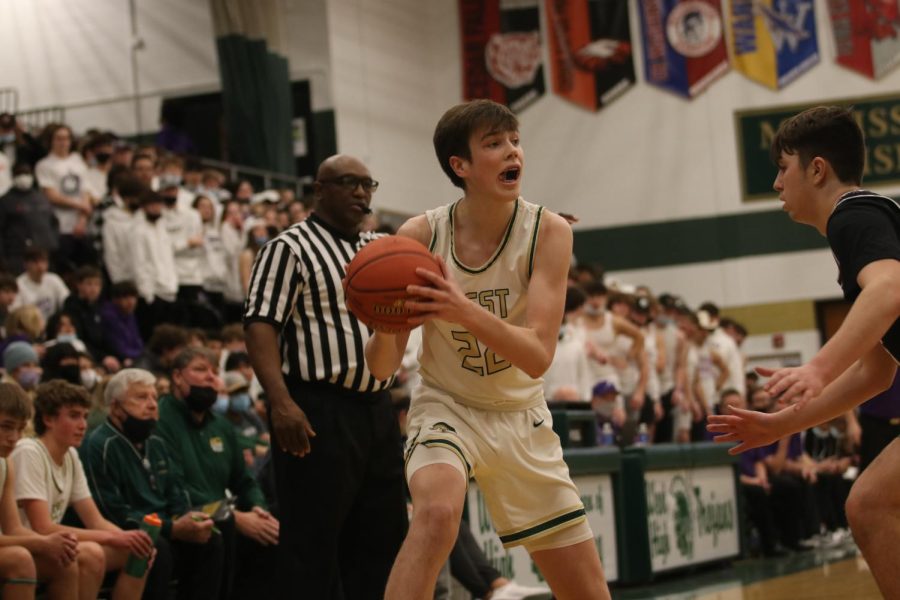 Gallery|10 Photos
Zoe Smith
Jack McCaffery '25 searches to pass during the second half of the game against Liberty on Feb. 4.
Leave a Comment