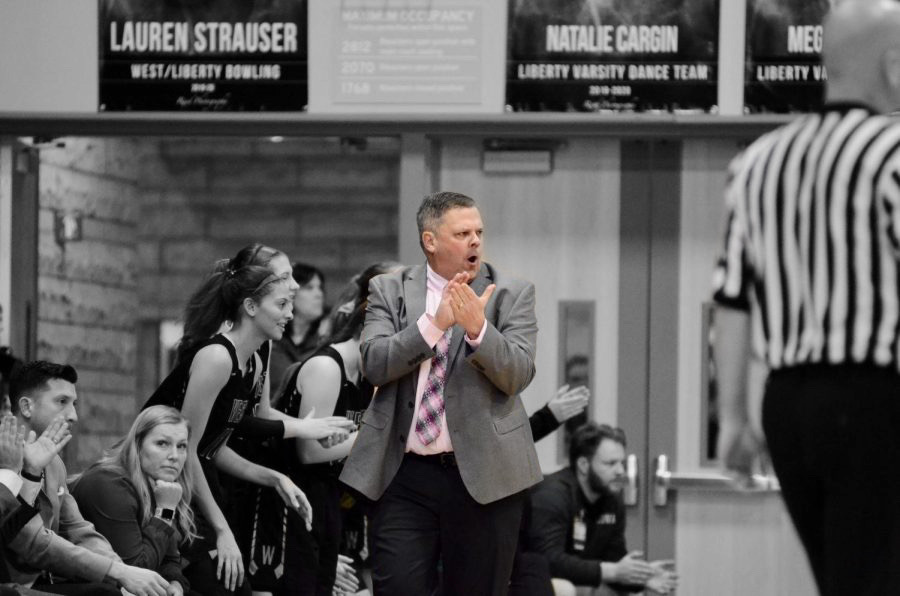 BJ Mayer has been coaching girls basketball at West for 15 years, and is now passing the reins to take on a new title. (Alyssa Skala)

BJ Mayer has been coaching girls basketball at West for 15 years, and is now passing the reins to take on a new title.

After a 15-year coaching career for varsity girls’ basketball, BJ Mayer steps off the court into a new position as West High’s Athletic Director.

Within mountains there are valleys, and former West High girls basketball head coach BJ Mayer faced plenty of both during his era of coaching. Throughout his 15 seasons, Mayer had arguably more triumphs than defeats, with two state championships and successful overall seasons. His competitive and supportive coaching style led him to receive praise from all over Iowa, but his undeniable knack for coaching was set in stone in 2018 when the Des Moines Register named him their All-Iowa Coach of the Year. That year brought Mayer many tough losses, but his fire and passion motivated the star-studded team to a state championship, winning against not only a team, but the Trojans’ rival.

“We beat City High in 2018, so it’s always great to beat your crosstown rival in the state championship game,” Mayer said.

Not many coaches can say they built a team from the ground up as remarkably as Mayer did that year.

However, Mayer wasn’t the only factor in leading the team to success during his years of coaching. Nate Frese, the newly crowned head coach, has been coaching a variety of sports since he was just 17. What started as a high school and college hobby led him to not only his shiny new title but also the past 23 years of coaching sports at West High. Through coaching soccer to boys basketball and now finally girls basketball, Frese has built himself quite the resume that ultimately made him the obvious choice to succeed Mayer. Frese began his assistant coach position in 2019 when the now-seniors were just freshmen. Now, as their head coach, Frese is excited about seeing them finish their high school careers by his side.

“Following them for almost four years now and seeing that journey to fruition is exciting for me,” Frese said.

Following them for almost four years now and seeing that journey to fruition is exciting for me.”

Even though Frese has been with the team for a couple of years now, he still has those first-day jitters many people experience when entering a new position.

“If somehow I wind up taking a misstep here or there or we have two injuries, and somebody gets really sick, you know, all the things that could go wrong,” Frese said.

With Frese’s current position as an English teacher and the head of the English department at West, he gets time to build a connection with his players on and off the court. Former coach Mayer believes that is one of the reasons why he fits so well into his new title.

“A lot of times, you don’t have to be a teacher to be a coach, but I think it helps get to know those kids and, you know, he definitely has that,” Mayer said.

When it came to filling the vacancy for West High’s athletic director, Mayer was a strong contender. Through many years of coaching at the school, learning the environment wasn’t something that Mayer would have to do. Athletic Secretary Brianna Nigg said this was a major reason he stood out as a candidate for the job.

“He’s been a coach for 15 years and been in the district for just as long so he knows that West High has this tradition of excellence and we know that all of our coaches are holding their kids to that same excellence standard across all of the sports,” Nigg said.

He’s been a coach for 15 years and been in the district for just as long so he knows that West High has this tradition of excellence and we know that all of our coaches are holding their kids to that same excellence standard across all of the sports.”

Mayer believes the reason for his passion for his newly-acclaimed title is simply because of his love for sports.

“Sports have been in my family ties for a long time. And I think this just gives me a different way to stay involved in athletics and stay active in supporting what we can do here at West High,” Mayer said.

In terms of creating positive change as he begins to lead the athletic department, Mayer hopes to improve the overall aspect of the athletic program.

“The goal that we have is to try to continue our success and maybe build upon that success,” Mayer said.

There’s one mission Coach Frese, Brianna Nigg and BJ Mayer all have in common this year: get students excited about sports. Encouraging participation in attending games and matches, especially for the girls’ teams, is a simple goal. Building school spirit and pride is really what it’s all about.

“We’re trying to do different things to bring kids to sporting events so that they can be supportive of their classmates and their peers,” Mayer said. “We are doing more with our teams where they have to help out in the concession stands and different things like that so that we can just build a much broader sense of community and a sense of school pride. We’re working on potentially, in fact, we are working on getting a new mascot, so that we can have a little bit more pride with that and do some different things along those lines.”