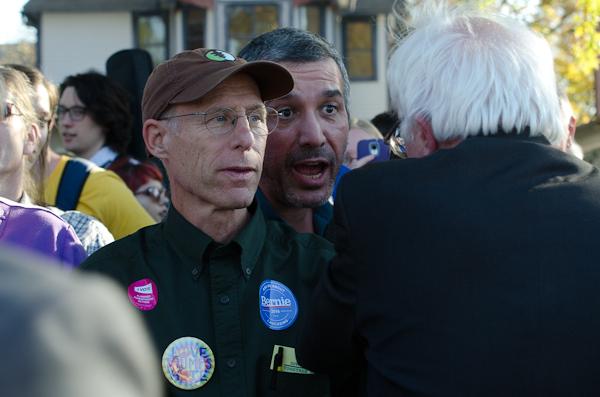 Bernie supporter John Macatee introduces himself to the Senator.

Sanders returned with a much different agenda than the last time he was in Iowa City, as he encouraged people to go out and vote for Clinton. 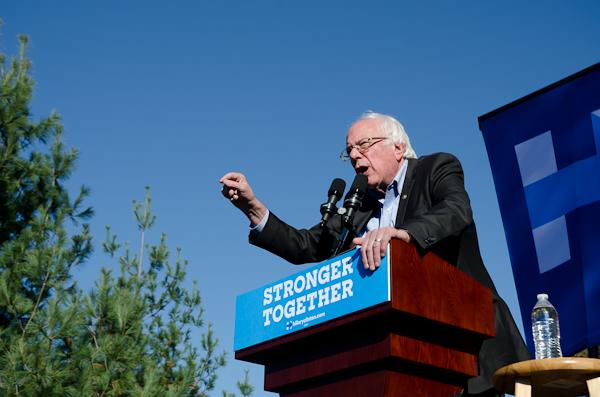 Bernie Sanders made a stop in Iowa City on Friday, Nov. 4 at College Green Park to campaign for Hillary Clinton.

Using the unseasonably warm weather to his advantage, Sanders spoke in length about the importance of climate change.

“We assemble together today, on this beautiful July day,” he said. “Oh wait, it’s November.”

Knowing his audience in a town with over 30,000 college students, Sanders also spoke expressively about the hindrances of college debt. The crowd wasn’t solely college students, and many West High students were in attendance. Among them was Amanda Parsons ’18.

“I’m glad [Sanders] joined [Hillary’s] campaign and isn’t like, ‘Oh, write me in,’” she said.  “That would split the Democrats and almost guarantee a win for Trump.”

Sanders won the Johnson County caucus in February, leading Clinton by nearly 20 percent. Although he was in Iowa City campaigning for Clinton, there was plenty of Sanders merchandise available. One man, Marc Daniels, traveled from Milwaukee, Wisconsin to sell Bernie Sanders kippahs.

“I’m trying to help Bernie weed out hate and bern out the Trump,” he said. “One thing I can tell you about the former Bernie supporters is that they can’t get enough of him.”

Michael Cho ’17 was at the event volunteering for the Clinton campaign.

“I always supported Bernie, but after he dropped out and after I realized Trump and Hillary would be the nominees, I came down to the conclusion that it came down to party unity,” he said. “It’s the job of the Democratic people to vote for Hillary, even if they’re salty about Bernie losing.”

Not everyone felt the party unity that Sanders and many of his former supporters turned to. Harry Manaligod ’15 came to see Sanders after feeling let down by his last-minute lack of appearance on Oct. 3., in which Sanders was set to campaign for Hillary in Iowa City.

“I feel like I kind of want him to wink at the end [of his speech], sort of like a signal. I feel weird about [him campaigning for Hillary],” Manaligod said.

Sanders also localized his speech by discussing the importance of wind energy, which employs 6,000-7,000 people in Iowa, and providing his condolences to the two slain Des Moines police officers earlier this month. More than anything, Sanders encouraged people to get out and vote.

“Bernie’s the guy who can get the crowd going and ready to vote. I think it’s a great stand to show coalition within the Democratic Party,” said Leah Brownsberger ’18.