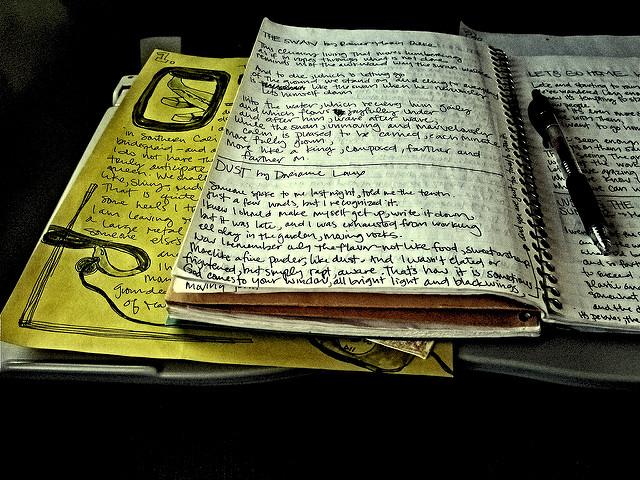 It is the month of November, which means the National Novel Writing Month contest is upon us.

When the thoughts of crazy characters, scenes, plots, coffee addiction and nights of literary abandon all in the span of one month are mentioned, writers around the world can only think of one thing: NaNoWriMo.

NaNoWriMo, otherwise known as National Novel Writing Month, is a creative writing project that has captured the interest of the largest groups of writers all over the world from amateur to famously published. Taking place in November, it challenges participants to to write a minimum of 50,000 words in the span of a month.  The founder, Chris Baty, started this project with 21 participants in 1999, yet in a matter of just a few years, that number has quickly expanded to hundreds of thousands of people that are all on the same journey.

NaNoWriMo has a main website that allows writers to come together to form one of the biggest communities out there in the world and gives writers a source for motivation, support and connection. Through this website is where writers of different regions can come together under a Municipal Liaison, or organizer, to meet up with each other at write-ins, parties or chats.

The community of Iowa City has formed a region and is very successful with the NaNoWriMo planned events in the past. One of the most heavily-attended events is the Kick-off Party at Perkins, which is an event that goes until twelve in the morning. to count down the beginning of starting a novel.

“I love being able to be a part of the community, but I think the most particular thing that I always feel really good about is that almost every year that I’ve been doing this, I’ve been able to facilitate with somebody else having the experience that I’ve had when I first got involved with the community,” said Marie, the Municipal Liaison of Iowa City. “You need people around you to help you get out of your own head.”

I just love the feeling that there are hundreds of thousands of people in the world that are supporting me in this project.”

Gene, another NaNoWriMo participant, agrees with Marie, believing that the support system formed by writers is what motivates her.

“Honestly, my favorite part is talking to other wrimos. I just love the feeling that there are hundreds of thousands of people in the world that are supporting me in this project.” That feeling has lead her far, and once she wrote so much for a straight 13 hours that “the real world was less real to me than the fictional world.”

NaNoWriMo has impacted the community of writers here at West High as well. One  former participant is Leah Dusterhoft ‘16. She agrees that NaNoWriMo has taught her many important lessons that she still carries on with her everyday life.

“It definitely told me ‘Hey look, you actually have other talents other than art,’” Dusterhoft said. “It also taught me how to keep working at something like over a course of a month, but it definitely was hard. One thing that I liked about it was that it made me think about how much work it just takes to write something, and not even just make it good; to just tell a story.”

At the end of NaNoWriMo, out of the participants that have attempted this incredible challenge, few go on to win the actual 50,000 words, but the perseverance to continue working after NaNoWriMo carries many writers far in their careers. Sarah Prineas, a native Iowa City resident, is a published author and NaNoWriMo novelist.

Having to hit that 1600 words per day for NaNo pushes me outside of my comfort zone– which is a good thing.”

“I absolutely love writing. People moan about how hard it is, you know? But for me it’s super fun,” she said. “Having to hit that 1600 words per day for NaNo pushes me outside of my comfort zone– which is a good thing. It allows me to turn off that pesky internal editor, at least for a while.”

Our community has been impacted by NaNoWriMo, and it will only get more popular from here on out. Order up the coffee and the late-night writing sessions; there will be plenty of more plot twists, scenes and magical words to be written in the future.

Every November is National Novel Writing Month. Commonly abbreviated as NaNoWriMo, the purpose is to write 50,000 words during the month of November. Finishing is winning, because finishing is hard. Below are the stories of three West students that dared attempt the challenge.

Casey McClenathan loves to write, but her experience with NaNoWriMo hasn’t always been smooth.

“The first year, I ended up writing over half the novel the night before,” she said. “Twenty-nine thousand one-hundred and thirty words,” she said. “Which I remember because I was the most proud of that accomplishment.”

She’s been improving since her first attempt, as well.

“The next year I started on the twenty-seventh of November and still finished, and last year I actually did a decent job of staying on track,” she said. “This year’s going to be another rough year, but I’m going to finish anyway.”

The only problem? Writing a novel takes time. McClenathan is a self-professed fast typer, and she claims it would take her 30 to 40 minutes per night to reach the goal.

This time, McClenathan has stayed on track for the most part.

“This year I started writing, and my fingers typed independently. I didn’t even know what was going on,” she said. “I ended up writing about a lady that was running the world but needs to be arrested for something for some reason. I don’t know. There’s a lot of capitalization because they’re yelling at each other- not the lady that needs to be arrested, everybody else. There’s a nice sentence like, ‘You’re a coward!’”

NaNoWriMo has its payoffs besides getting a head start on a novel. One way in which it is beneficial is that there’s no room for perfectionism or worrying about details.

Another benefit, at least for McClenathan, is that she gets to congratulate herself for what she’s done.

“I’ve had a lot of trouble acknowledging accomplishments that I’ve had,” she said. “So just the sheer ability to write fifty-thousand words in thirty days, it feels really good when you finish. Even if you read it and it and you’re like, ‘that’s garbage,’ it’s really nice.”

Luke Reynolds is using the month of November to continue writing a novel he has previously been working on.

“I started a novel before school started. It’s called the Power of Three and it’s about these three boys that are best friends, and it’s sort of regarding their sophomore year and them growing up, maybe growing apart, making new friends, just figuring out life,” Reynolds said. “It’s challenging to write because there’s three point of views. I have to develop different voices for each of them.”

Reynolds is a relatively seasoned writer for his age, and has written novels before.

“I’ve written novels of more than fifty-thousand words before, but I just haven’t done it within a month,” he said. “One novel last summer was [written] over the course of three months.”

Reynolds is busy with school, working backstage for the upcoming play and a job, making it a little bit tough to meet the goal. However, he somewhat enjoys the pressure.

“It inspires you to write. I feel like sometimes when you have a deadline, it’s sort of like, ‘Oh my gosh, how am I going to get fifty-thousand words in a month?’ Panic.”

Reynolds plans to become an author, and feels like NaNoWriMo helps his ideas flow.

“Get it all out on the page within that month, and then go back later and make edits and stuff, and it’s yours,” Reynolds said. “National Novel Writing Month, a lot of people are doing it, but each person makes their own novel and they have something they can cherish for the rest of their lives.”

Jenna Wang has always been into writing, but never thought 50,000 words was a reasonable goal.

“I wanted to do it before, but I guess I didn’t have the time to, and I was a little scared, too. Fifty-thousand words while I’m a high schooler or in junior high is really daunting,” she said.

As it turns out, 50,000 words is very daunting; Wang is currently not quite on track with her writing.

“I’m at around fifteen-thousand words,” she said. “I’m behind, but I’m still going to continue going on my daily word count. I don’t think I’m going to make it, but I’ll still push through.”

Wang spends an hour to two and a half hours per night writing, sometimes staying up late or procrastinating homework.

Wang has always been an avid writer and even did some work in elementary school. However, this year was the first time she adopted the NaNoWriMo goal.

“In third grade a wrote a forty-thousand word book before I stopped . . . and in fifth grade I wrote a one hundred and fifty page book,” she said. “I love writing and I’ve always written since I was little, but this is the first time I’ve done a real project.”

Wang’s project is a story she’s been thinking about for quite awhile.

“I’ve had this idea for a long time, it’s teen dystopian fiction, like the books we all read in high school,” she said.

As for her take on how the challenge has affected her, Wang says it’s taught her a lot about how much effort she needs to put in to write.

“It teaches you to roadmap and do an outline for what you want to do,” she said. “It teaches you to persevere and to have a daily goal and to stick to that goal. It’s such a hard thing for people to do that, so NaNoWriMo helps with persevering. It helps you learn a lot of things about yourself.”

Regardless of whether she reaches the goal or not, Wang is enjoying herself.