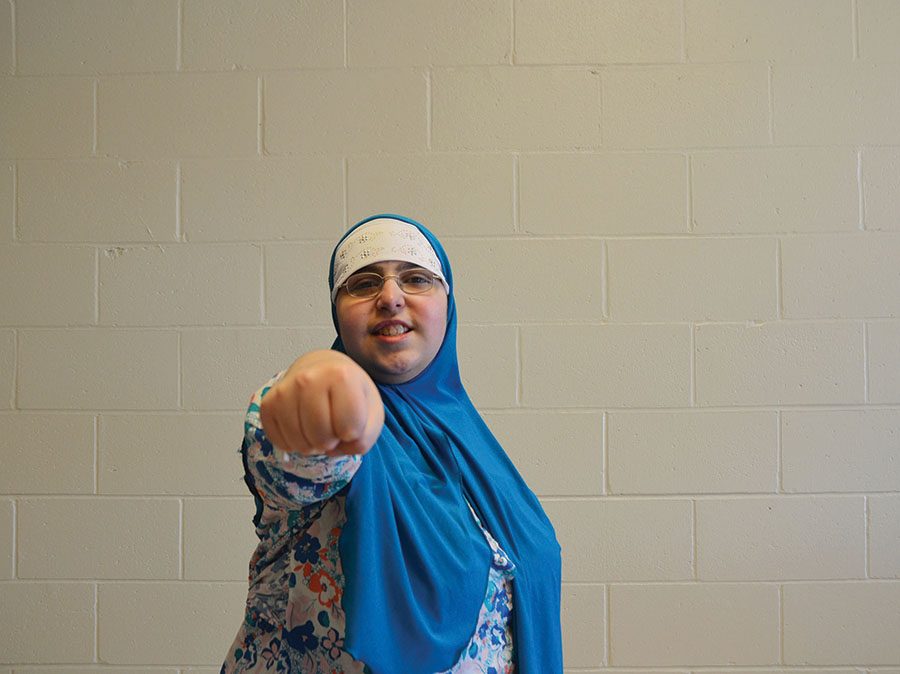 As one enters the Strike Martial Arts Academy, they are met with a flurry of action: students swiftly kicking and punching their way to success. In the corner stands Hafiza El-Zein ’19, preparing to practice her tornado roundhouse kick. Though many people know El-Zein for her kind and welcoming nature, this is a side of her that not many get to see.

El-Zein has studied taekwondo three days each week for the past seven years. Through her hard work and dedication, she earned a red belt, which is one step below a black belt. Although she is passionate about the sport, El-Zein says she hopes she will never have to use her skills in real life.

“I want to learn to defend myself, but, you know, I’m very nice and don’t want to hurt people,” El-Zein said.

Along with taekwondo, another favorite activity is performing in choir. In the past four years, El-Zein has made many friends through West Treble Choir. One of these many friends is Niyati Vyas ’21. Vyas’ fondest memories with El-Zein are cheering with her at the football games because of the spirit and pep El-Zein emanates.

“Hafiza has taught me the value of kindness and positivity. She always has a smile on her face and makes others smile,” Vyas said. “She always looks on the bright side and sees the glass as half full.”

Even when walking through the hallways, El-Zein makes connections with students and teachers alike. Her friendly character shines most brightly in interactions like these.

“You can tell, just by the way that she’s greeted in the hallway, that she’s able to make impacts on people’s lives without her even realizing it because she’s just such a nice person,” Haverkamp said. “Sometimes she doesn’t even notice that she’s doing it.”

Another member of Best Buddies, Elise Seery ’21, shares this sentiment.

“I think if I could use one word to describe her, it would be radiant, since she never fails to spread her positive energy,” Seery said.

El-Zein channels this positivity through her numerous interests, many of which involve giving back to others like working at Oaknoll Retirement Community and baking cookies for family and friends. After graduating from West, she plans to attend a “4 plus program” at the Transitions Services Center. This program focuses on providing training for special education students to increase levels of independence at home and in their respective communities. She plans to later use her skills as a caregiver or an artist.

It is this nurturing and kind personality that led to her nomination for homecoming court. To be nominated for this honor, students submitted statements of what makes El-Zein a special person at West. The nomination statement below was read at the homecoming football game.

“Hafiza is recognized for being so sweet to everyone and always going out of her way to say ‘hi’. Even if she is going through a rough time, she never fails to make others feel loved and appreciated.”

When El-Zein heard that she won the title “Hero of Troy,” she was touched.

“[I felt] very excited,” she said. “It surprised me. I kind of thought ‘Oh my goodness, I did not know they were going to vote for me.’”

This news, however, did not shock Seery, who sees the impact El-Zein makes at West each day.

“I was not surprised in any way,” Seery said. “Hafiza is everything they were looking for with the nomination, and when they were announcing the results, I knew automatically that they were going to say her name because of the astonishing person she is.”

Paraeducator Samina Naz, who has worked with Hafiza throughout her high school career, also believes that there could not be a more deserving person to be awarded this honor.

“Hafiza is one who’s loved by so many people, by teachers and other kids,” Naz said. “Wherever she goes, she’s full of love.”