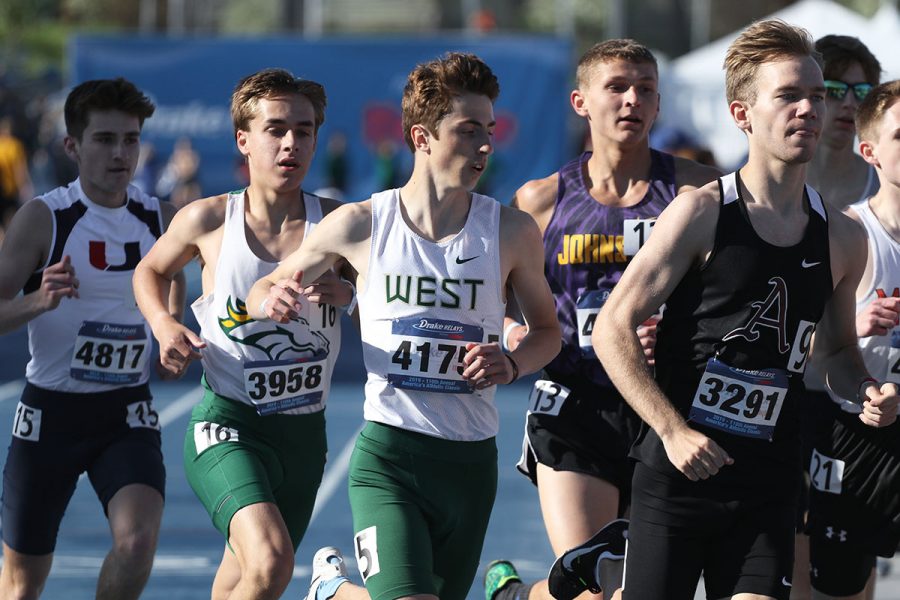 In 2015 Kolby Greiner was interviewed as a Rising Star for WSS. As a soon-to-be high school graduate, he reflects on his time spent with the West High cross country and track teams.

West Side Story: When did you first start running?

Kolby Greiner: I started running when I was in fifth grade, going into sixth grade, and they weren’t really big races. I’d do a 5k every once in awhile and then I just started getting hooked on it.

WSS: Do you prefer cross country or track?

KG: I prefer cross country; it is definitely my favorite sport.

WSS: Who is your biggest supporter and encourager?

KG: I’d say my dad. He’s paid for me to go to so many USATF (United States of America Track and Field) meets and AAU (Amateur Athletic Union) meets. He’s really taken me all around the United States to run.

WSS: What is your best memory from previous seasons?

KG: I would say winning the Junior High Cross Country Championship, that was definitely a pretty good memory because the season before I had gotten third at state. I remember all the summer before working really hard to try and win the state championships.

WSS: What is your favorite memory so far this season?

KG: I would say my best memory was when we were doing a new drill called ‘Oregon Drills.’ Coach Martz was pretty proud of us because the Varsity team stayed out there longer than anyone else even though none of us wanted to keep going.

WSS: How has your older brother’s [Kaleb Greiner ’14] success in running helped you?

KG: I have gone to a lot of his state track meets and when I saw him fall on the track and give it his all in the Distance Medley. I understood what I had to do to be like him. He’s always motivated me to work hard and said that he would be there every step of the way.

WSS: Where is your favorite place to run and why?

KG: My absolute [favorite] place to run is Southpoint Trails. It’s very beautiful out there and you can run right alongside the lake.

WSS: What happened at the Pella? Describe the race.

KG: That’s never happened to me before. But I was running and leading the race and at 2.5 miles something hit me, like a wall. I was about ready to pass out but something inside of me kept going and I honestly don’t know what it was. But when I crossed the line I blacked out and I think I tripped over someone. When they got me back to the tent they said I had heat stroke.

WSS: What has the transition from junior high to high school been like?

KG: Coach Martz has really helped the transition. He helped me get used to the morning practices during the summer and also really stresses how important it is to get good grades and do our homework.

WSS: What is your favorite part about cross country?

KG: My favorite part about cross country are the competitions and hanging out with my friends Ali Ali ’17 and Jeff Garbutt ’18.

West Side Story: Do you prefer running cross country or track for West?

Kolby Greiner: It’d probably have to be track now. I absolutely love it. There’s nothing better than going into a home stretch with hundreds of people shouting, but also your team is right up there on the line. Cross country, that’s like 3.1 miles of probably not a lot of people out there. Not a lot of people come to cross meets, because to watch cross country you also have to be very athletic, because you have to run back and forth to those places, [so] I’d probably say track.

WSS: Who has been your biggest supporter through the last four years?

KG: I will probably say Coach Craig … [He] has really been there since I was in seventh grade and started running cross country, just kind of thought I’d go out and try it. But Coach Craig has been there every step of the way and he’s always kind of been a mentor and told me, ‘On the easy days we’ll take it easy,’ because when I started out I pretty much went hard every day. He’s definitely been a mentor, and after all of my PR races he’s been there for a hug or something and he’s been a big supporter for everything.

WSS: Where is your favorite place to run and why?

KG: It’s probably right here in Iowa. There’s probably a lot of beautiful places out there, but I’d say around Lake MacBride in Solon, it’s like a 10-mile loop. I’ve done it with Yousif Salama and … Raymond Yang and Ken Wilbur. We all went out on a run there; it’s gorgeous. 10 miles seems like a lot for the average person, but when you kind of get into it, pretty much anyone can do it, and it’s just one of those runs where you don’t really want to talk, it’s just 60 degrees and the sun’s going down and it’s just awesome.

WSS: What has been your favorite moment so far this season?

KG: By far almost the highlight of my high school career was winning Forwald the other night. Forwald Relays, my class of 2019, we’ve never lost a track meet at City High. Four-time consecutive Forwald champs, which is very hard to do. Forwald is kind of the state meet that’s not the state meet. It was awesome.

WSS: What is your fondest memory from high school cross country and track overall?

KG: So far it’d probably be when I ran the 9:13 Two-Mile at State sophomore year. That was like second or third in the nation at that point. My grandma had just died so I had dedicated it to her … It was awesome. It was like I was not expecting to run that fast, but I’m hoping that … this Drake Relays will actually be even faster than that.

WSS: What was the biggest obstacle you faced as a high school runner and how did you overcome it?

KG: I wouldn’t say it’s ongoing, but I think I finally figured it out and it’s patience. For any high schooler, I think patience–no matter if it’s just academics or sports–is what you have to have. But you also have to be able to put your trust and have faith in certain things … For me having faith is in the Bible, but for anyone it could be having faith in something … if sports or school is stressing you out, if you find faith or hope in some other things besides that, like family or friends because there’s a lot more… I think as a freshman in high school, I always thought that my whole life or world was surrounded by running, but I think once I saw that there’s better and bigger things in our 80 something years of life that we get to live on this earth, and if we can see that more clearly, then life’s a lot better and we can be more patient with ourselves.

WSS: What are you going to miss most about running for West?

KG: Probably just the little jokes and all of the non-serious stuff. Just hanging out with all of the guys. Next year’s going to be a lot more serious. It’ll be pretty much like a job, but … I am very much looking forward to that, but I am also going to miss all the friends I’ve made over these four years, my coaches and everyone that’s kind of been supportive in this community.

WSS: And will you be running in college?

KG: I will. I’ll be running for Bradley University.

WSS: What do you anticipate the change from high school running to college running will be like?

KG: I think it’ll be a lot more intense. Right now I’m doing about 45, 50 sometimes 60 miles a week. I think there I’ll be doing 100+ there. I think my schedule will probably be shifted to running. You have study moments where you kind of have to key in to go study because your NCAA eligibility and scholarship runs on those hours. But I’m looking forward to it. It’ll definitely be more scheduled for me, so I’m looking forward to that, but I think it’ll be a lot more intense and on my own in the sense that you kind of have to go out and perform for your team and your coaches.

WSS: How are you currently preparing for that intensity?

KG: I’ve kind of mentally been preparing for the fact that I’m just gradually going to increase my mileage this summer. Nothing too drastic. Probably can’t go from 60 to 100 every week because you’d probably get injured, but that’s a lot of pounding on your body, because every time your foot goes into the ground on say a 10-mile run, you’re putting twice your body mass through that leg and all those muscles and bones. Running kind of really wears on your body. But I think just mentally staying relaxed and hopeful is always good.

WSS: What advice do you have for underclassmen or future West High runners?

KG: Don’t listen to the negativity because for a lot of incoming freshmen or sophomores, I’d say distance running is something that anyone can do but it takes a lot of time to get good at it … I’d say just put in a lot of hard work and don’t listen to the people that call you try hards or whatever. Distance running’s one of those sports where you have to do your own thing sometimes, where you have to maybe go on an eight-mile run at your own pace and the rest of the team might hate you for that because you’re not running with them. They might say things about you, but you have to go do your own thing. Your coach will always help you with that.