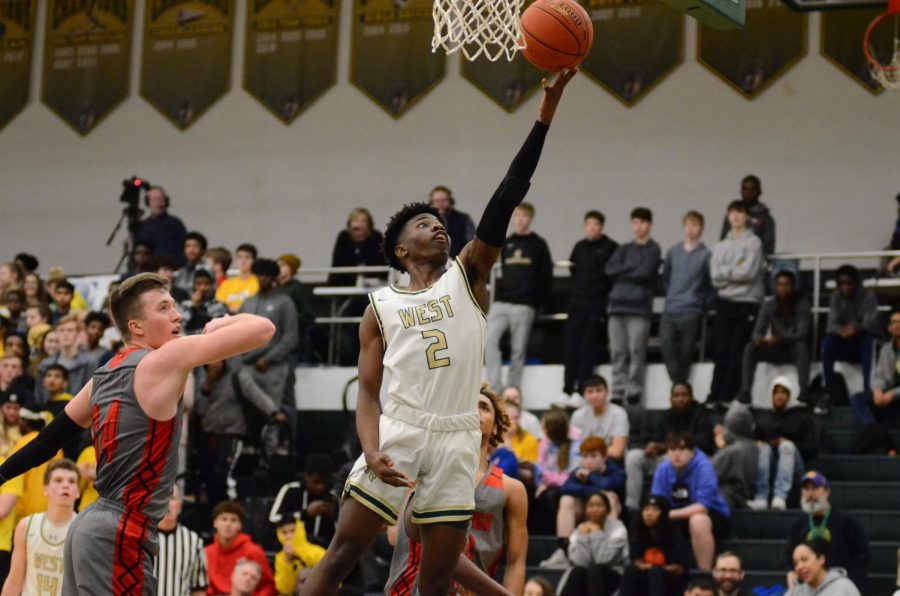 Christian Barnes ’22 pulls off of City’s number 14 and makes a perfect layup Jan. 31.

The girls basketball team dropped their second game to the Little Hawks 57-32 while the boys team dominated City 61-28 behind 17 points from Even Brauns '20.

With the whole starting line up playing together once again, the Trojans took the home win against City High 61-28. Now with 10 consecutive wins, the Trojans are ranked No. 1 in the state.

The game started out fast as West took an early lead against City. Even Brauns ’20 played with passion early and converted many layups, giving him 10 points in the first quarter. Starting with a couple of minutes left in the first, Marcus Morgan ’21 was back on the court for his first time after a six-week injury, scoring five points on the night.

The second quarter was when West started pulling away as Brauns slammed home an early dunk, hyping up the crowd giving energy back to the players on the court. With a 19-point lead at half-time, student section member Ali Alwahdani ’20 was given a half-court shot to win free Chick-Fil-A for a year. His shot was just off the mark.

Resuming back in the third quarter, Morgan scored on a three-pointer and Brauns kept blocking shots consistently. The Trojans lead the Little Hawks 54-19 after the third.

With a 35-point lead entering the third quarter, Coach Bergman put in Mo Simpson ’21, Mikey Crutcher ’21, and Andrew Tauchen ‘21 and Zach Anderson ‘21. Crutcher added five points to the score in the fourth quarter, while the starters on the bench cheered loud and proud. The final score of the West vs. City boys game was 61-28.

The boys will be back on home court next week as they take on Cedar Rapids Jefferson Feb. 4 at 7:30 pm.

The Women of Troy couldn’t quite keep up with the Little Hawks.

The second quarter was when the Women of Troy started to fall behind. City kept West rapidly fouling as they accumulated points from quick layups and soundless threes. At the end of the half West trailed 18-25.

After the halftime break, the Women of Troy picked the pace back up, keeping the Little Hawks student section sitting in quiet for the first two minutes of the third. After a made three by City the momentum returned to the Little Hawks, and they wouldn’t look back.

Tons of turnovers in the third kept West at a lower score and gave City a 45-28 lead at the end of the quarter. With such a strong City lead, the Women of Troy’s mentality plummeted and their shooting appeared to struggle as a result.

Sparse points by Jenna Saunders ‘21 gave some joy to the bench as Coach Mayer called multiple timeouts to try and convince the girls to still give it their all despite the inconsistent calls by the officials. After many pep talks, Grace Schneider ‘20 was back in for the last minutes of the third quarter. Schneider made a quick layup seconds before the third buzzer.

Once the game was clearly out of reach for West, Coach Mayer put in Kaitlyn Hillberry ‘20 and Avery Vest ‘22 to finish out the last minute and a half. Defense from the Hawks smothered the Women of Troy in the fourth quarter, ultimately leaving a 57-32 City victory. 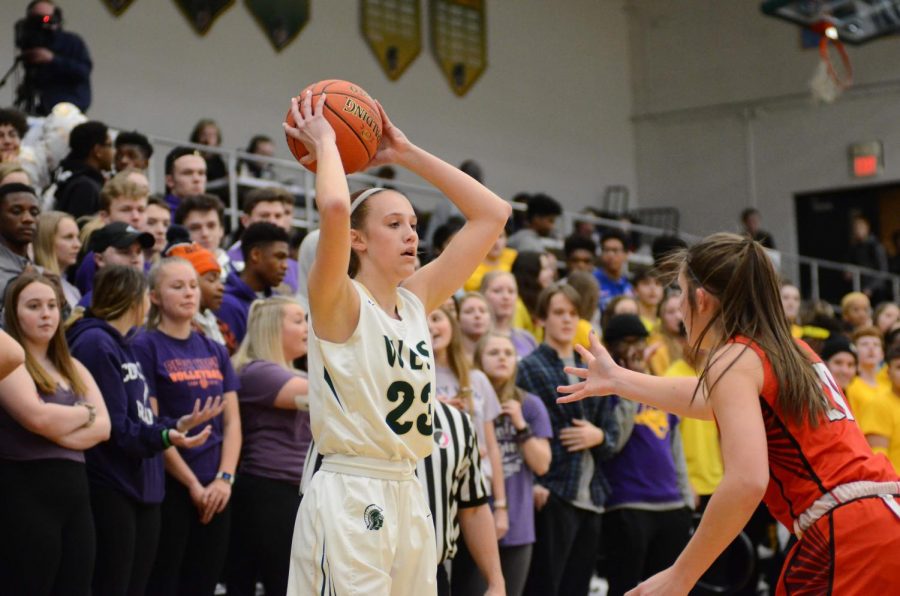 The Women of Troy play Cedar Rapids Kennedy in the West High gym Feb. 7 at 7:30 pm.