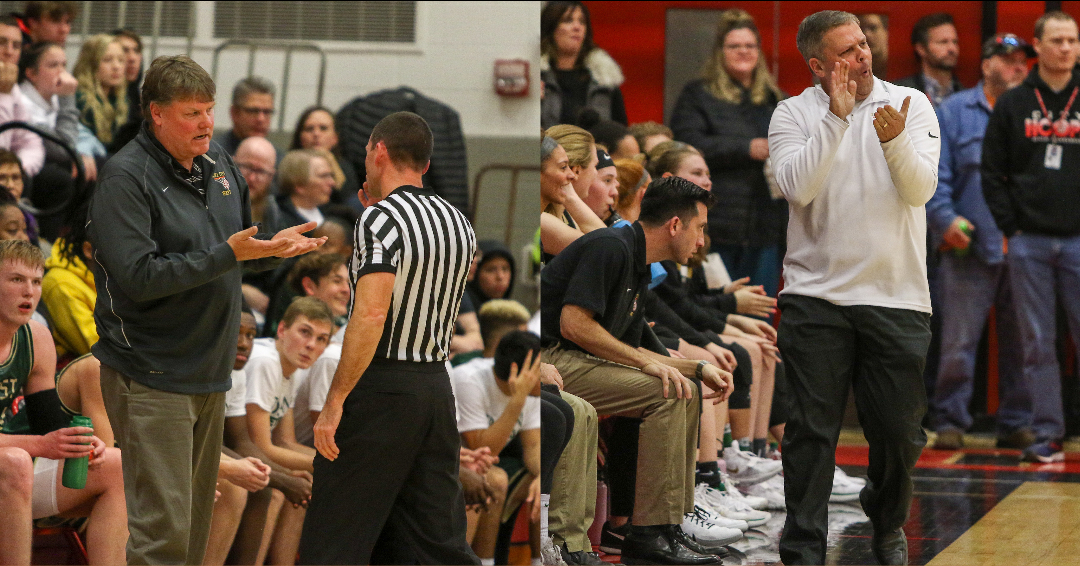 Steve Bergman and BJ Mayer coach against City on Dec. 14.

Coming off Coach of the Decade honors basketball coaches BJ Mayer and Steve Bergman reveal their secrets to success over the past ten years.

Iowa Girls’ Coaches Association 2020 Hall of Fame inductee BJ Mayer turned the girls’ basketball program around only one year into the decade as they made their first-ever state tournament appearance fighting their way into the championship game in 2011. Mayer’s teams also made appearances in Wells Fargo in 2013, 2015, 2017 and a win against cross-town rival City High in the 2018 state championship.

For Mayer, the amount of state tournament appearances is equalized by the sense of family and culture present within the girls basketball program. Throughout all four quarters, one can find Mayer pacing up and down the slide line, not only coaching but encouraging. With Mayer’s culture came success as his teams finished with a record of 187-53 in the past decade along with six Mississippi Valley Conference divisional titles.

“Coach Mayer was more than just a coach to me …  a person that was there for me when I needed him most but as well as someone who helped me become the player and person I am today,” said Lauren Zacharias ’19, a former four-year starter under Mayer. “Don’t take it for granted because he is the best coach you will ever play for and it goes by fast.”

Mayer brings the culture of his girl’s basketball program to places on and off the court to produce a connection between his players and an all-in mentality every night. Team bonding and inclusive meals are all part of the chemistry that has produced winning teams under Mayer’s regime.

“We really want to be about a family … we try to worry about us, we want to play really good defense, we wanna share the basketball,” Mayer said.

A big part of being a family is helping one another through constant encouragement, which has been crucial for this year’s team that features four new players in its rotation.

“We have also tried to bring in our younger kids like the seventh and eighth graders come in the summer all the time so they get to see that upfront, so when they do get to us that helps bridge that gap a little bit,” Mayer said.

A little over halfway through the 2020 season Mayer’s team undoubtedly has the family-like atmosphere but with some new faces to the program, there is definitely some room to learn and develop. As his young team continues to take in varsity experience the future can only be bright for Mayer and his squad.

While BJ Mayer strives to be a father figure of sorts for his girls program, long-time boys basketball coach Steve Bergman might just be the crazy uncle. Candid and clamorous, Bergman knows how to get the very best out of his players.

The Gazette’s boys basketball coach of the decade, Steve Bergman led the West High boys’ basketball team to three consecutive state championships in 2012, 2013 and 2014, establishing an Iowa high school basketball dynasty. 2010 was the only year of the past decade that Bergman’s squad didn’t make an appearance at Wells Fargo Arena.

Over the years, Bergman has accumulated 18 state tournament appearances in which he proved the mantra “defense wins championships”. Intense ball pressure and ball denial has aided Bergman’s teams to many stellar defensive nights, most recently limiting class 4A’s second highest-scoring offense to only 32 points.

“[Coach Bergman] would be on us all the time about the smallest things,” said former West player and current professional player Jeremy Morgan ’13. “It didn’t start to sink in until around my junior year if we did all the little things better than every other team we would win games.”

Morgan was a part of two state championship teams and contributed to the 60-game winning streak in the early 2010s that put West High basketball on the map nationally. With all the wins and accomplishments, Bergman likes to describe his program with one word: consistency.

“The system is the same, we try to be really good defensively, we try to take care of the ball, we try to play fast, we don’t always do that, we try to understand what a good and bad shot is, and that’s what your practice is focused on,” Bergman said.

“It’s never easy really to be us. For everybody else it’s a huge game,” Bergman said. Throughout Bergman’s time at West, he’s made winning consistent.

As March approaches Bergman and the boys’ basketball team have their eyes on not only another state tournament run but a championship. All year Bergman has put together solid defense performances and schemes to win big games against highly-ranked Dowling Catholic, Dubuque Hempstead and Waterloo West.

A state championship to start off the new decade could be the topper to Bergman’s career but until then there are more games to be won as the Hall of Fame awaits.