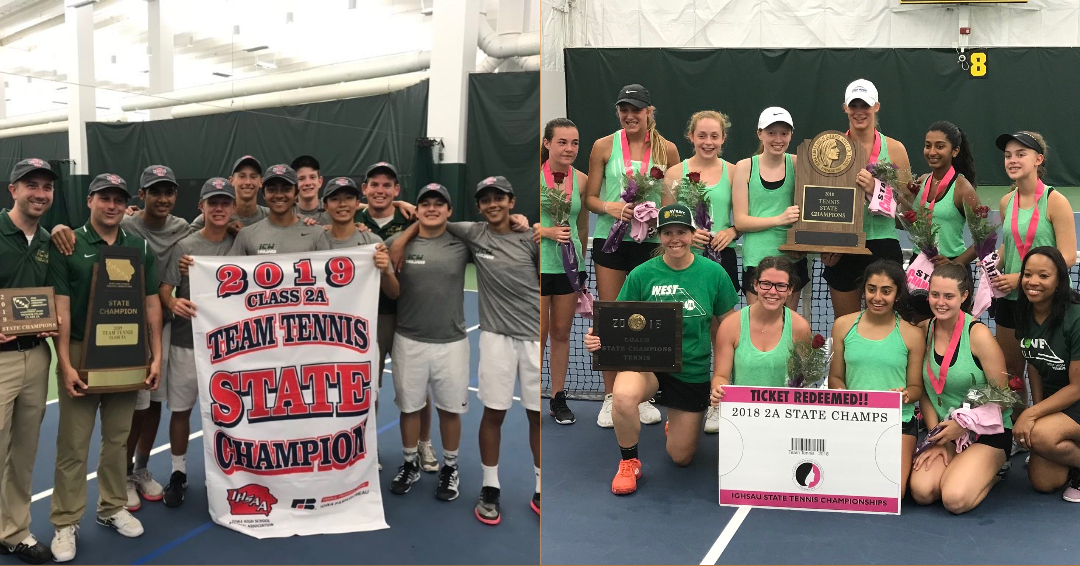 The boys and girls tennis teams pose after winning state titles at the Hawkeye Tennis and Recreation Center.

The boys and girls tennis teams pose after winning state titles at the Hawkeye Tennis and Recreation Center.

With the cancellation of spring sports due to COVID-19, West's boys and girls tennis teams will have to wait until next year to showcase their abundance of talent.

With plans to retire from coaching soon, boys tennis coach Mitch Gross reflects on over a decade of championship-level success and the relationships he has built.

In a school renowned for its state championships, perhaps none have made winning look easier than boys tennis coach Mitch Gross.

A former history teacher at West and current Northwest Junior High administrator, Gross, like many other coaches at West, has created a winning tradition with teamwork and trust.

“The thing that really separates us from other programs around the state is that we put a huge emphasis on team,” Gross said. “The other thing we have is what I call the ‘championship mindset’ [which is] really never letting off, going all out all the time.”

Gross’s system has certainly been proven. Since his arrival in 2002, the Trojans have posted a 287-30 record, including six state championships since 2012 with a record of 93-3.

For the players, winning wasn’t always expected, however. Taking over a 3-12 team in 2001, Gross certainly didn’t turn the team into a powerhouse overnight. Or maybe he did.

“When I saw them I thought they were better than a 3-12 team. People had said that players were showing up Saturday mornings hungover or had partied too hard the night before,” Gross said. “The way that we’ll fix that is that [I thought] we will just have them be with me on Friday nights. We still do every Friday night team night together.”

The nearly 20-year-old tradition that began as an alcohol deterrent has become one of the core pillars of Gross’s program and something he attributes much of his players’ camaraderie and success to.

“I do believe at this level every coach knows X’s and O’s…but if you can’t connect and motivate your players it doesn’t matter,” Gross said. “Same with teaching. You can be the smartest teacher, but if your students don’t like you they’re not going to listen to you.”

I do believe at this level every coach knows X’s and O’s…but if you can’t connect and motivate your players it doesn’t matter.”

While Gross strives to create meaningful relationships with his players, there’s also a level of expectation and demand that comes from producing so many championship players like junior captain Mukundan Kasturirangan.

“[Gross] will give you a lot of advice about life and stuff like that, but also there’s a clear distinction when you’re on the court, he’s your coach,” Kasturirangan said. “There’s no question about that.”

As many players like Kasturirangan have found out, the stress that comes from playing for such a highly-touted program is a challenge unmatched in club tennis.

“I didn’t expect there to be that much pressure on me as a freshman,” Kasturirangan said. “It’s just a different pressure to play for other people and for your team and for your school.”

Kasturirangan, like most of Gross’s players, train through the Hawkeye Tennis Academy (HTA), a high-performance training program run through the University of Iowa. Additionally, the athletes compete in individual tournaments against top competition from around the Midwest.

The long-standing relationship between West and the HTA has been symbiotic, with both Gross and the Academy benefitting from the abundance of high school talent in the Iowa City area.

BJ Wolf ’21 has been playing competitive tennis for eight years and looks to contribute on the varsity team next spring. Wolf, who plays in the HTA with Kasturirangan and most of the other varsity players, has grown up practicing alongside former West High greats like Jack Wenzel ’19 and David DiLeo ’15.

“[The older players] definitely had a presence because I was in the same academy with them … so I definitely knew who they were,” Wolf said. “They … were what I wanted to be.”

For Wolf and the rest of the varsity players, however, it will be another year until they are able to showcase their talents playing in Gross’ program. The widespread COVID-19 outbreak has cancelled the team’s season, leaving the athletes, especially lone senior Piero Ortiz Cruz, devastated.

“In my case, as the only senior on our team this year, I was very excited to have an interesting and memorable season with my teammates,” Ortiz Cruz said. “Hopefully…we can be back outside enjoying playing sports very soon.”

In my case, as the only senior on our team this year, I was very excited to have an interesting and memorable season with my teammates.”

The suspension also impacts Gross, who was planning to retire from coaching after this season but has vowed to return in 2021 following this unprecedented turn of events.

While Gross empathizes with the concerns of players and fans, there is also a bigger concern for the health and safety of the game’s players and coaches that extends beyond the court

“I really think medicine and science has to dictate [our actions]” Gross said. “ I feel horrible that this is where things are but I also…would not want to be a part of anything that ends up being socially irresponsible that could contribute to something much bigger than high school sports.”

Coming off back-to-back state finals appearances, the girls tennis program is looking to start West High’s newest dynasty with a blend of experience and young talent.

While Gross plans to retire from coaching in the near future, head coach Amie Villarini and the girls tennis team are just getting started.

Villarini, a ’97 West grad, took over the girls tennis program in 2013 from guidance counselor Kay DiLeo, eager to enhance her players’ mental approach to the game.

“I was just trying to come in and maintain that winning tradition, if anything maybe adding to it a little more,” Villarini said. “Some of the things that I’ve added which we’ve never done in the past … is actually taking videos of the players and their matches and using Hudl and doing video analysis.”

Watching film is just one part of what Villarini refers to as “commanding the court.” In singles matches, being a strong and confident player is crucial in order to dictate the style of the match, something newcomer Ella DeYoung ’23 has been working towards for her freshman season.

“Being confident with your game is something I’ve really been trying to work [on],” DeYoung said. “Just playing my game and being aggressive, coming up to the net and things like that.”

Being confident with your game is something I’ve really been trying to work [on]. Just playing my game and being aggressive, coming up to the net and things like that.”

With DeYoung and the rest of the varsity team playing club tennis, Villarini places a lot of her trust in the hands of the Hawkeye Tennis Academy’s [HTA] instructors to prepare her players for the season. The team also benefits from the availability from the HTA’s indoor courts for practice when the weather is inclement.

“I usually stay away from the technique because [the Academy is] coaching the players in their private lessons and stuff,” Villarini said. “I’ll tweak certain techniques things if I notice them, [but] I’m really focused on strategy and the mental side of the game.”

Since Villarini’s hiring in 2013, the program steadily rose in production, culminating in a team state championship in 2018. Captain Jessica Moonjely ’20, who scored the final winning point, and juniors Caroline Chandler and Audrey Koch remember that championship feeling and are certainly eager to reclaim the title in 2020.

“It was a really great feeling, and it was also the year that I was on the same team as my sister Emma [Koch ’19],” Koch said. “A couple of the girls on that team I had grown up with, so [that] definitely made it super special. Having that feeling definitely gives you something to work for.”

Unlike Gross’ dynastic program, few fans outside of West expected the Women of Troy to win the title over Ames in 2018, and even more were surprised to see the team return to the state final in 2019 for a rematch with their top player injured.

After back-to-back finals appearances, Villarini’s well-kept secret is out now. With three talented freshmen accompanying DeYoung on next year’s varsity team, the rest of the state will be put on notice soon enough. This team has talent, experience and, most importantly, they know they belong.

“I think we have pretty high expectations for ourselves, especially after falling a little bit short last year to Ames and it came down to tiebreakers,” Koch said. “I definitely think we have a little bit of a chip on our shoulder.”

Unfortunately, the girls will have to wait until next season to make their statement at the high school level. Amid the COVID-19 outbreak, all spring sports have been cancelled.

“These are just really unprecedented times, historic times,” Villarini said. “We’re learning a lot about ourselves as humanity, about what’s important and what we take for granted.”