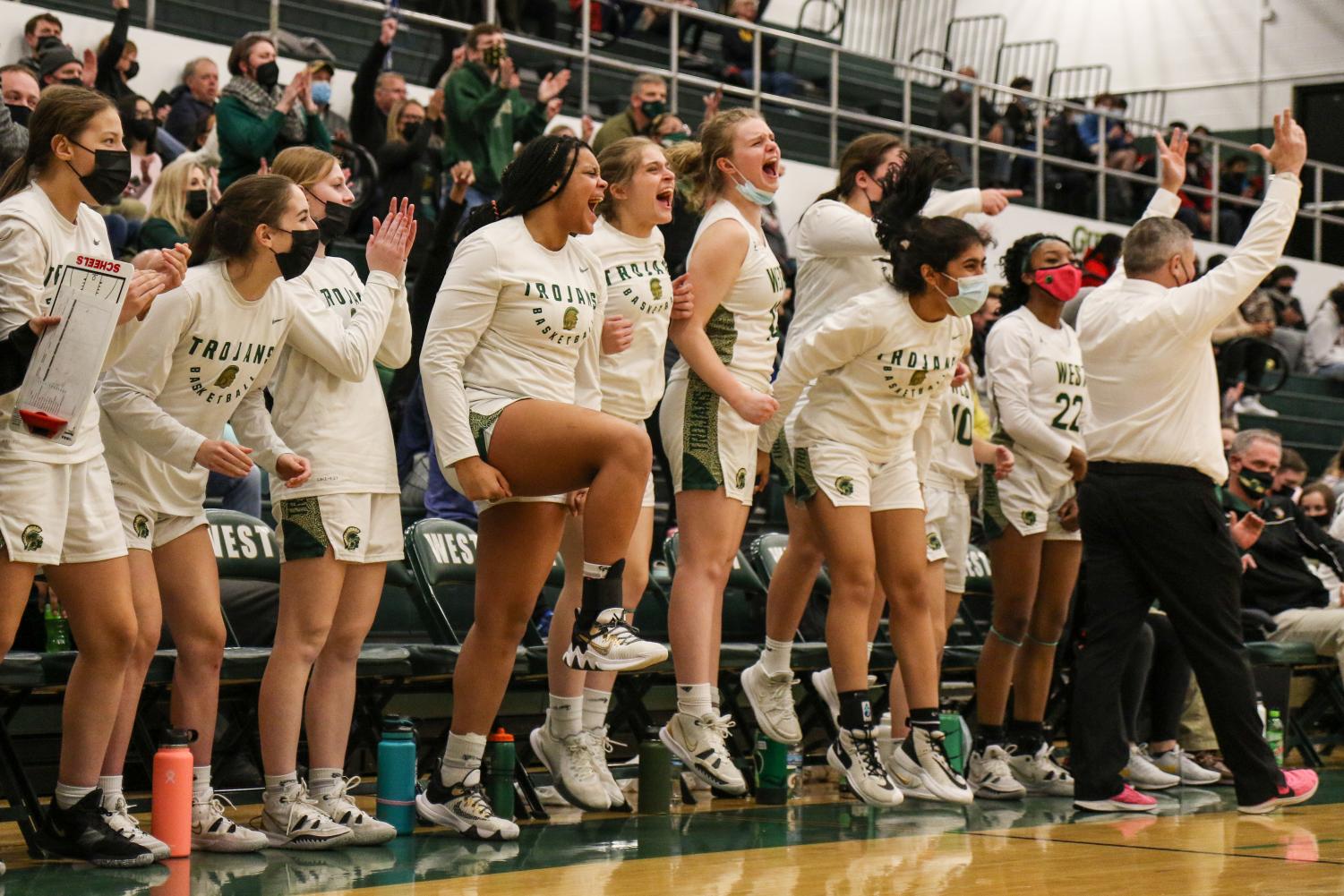 Both boy and girls basketball team faced off with cross-town rival City High for the second doubleheader of the season on Jan. 21.

Girls basketball gets revenge against the Little Hawks

After losing to the Little Hawks nearly a month ago, the girls basketball team was ready for the rematch against City. The Trojans won 52-49 against cross-town rival City High in the first game of the boy and girl doubleheader Jan. 21.

Anna Prouty ’23 got things started for the Trojans after making one of her free throws and connecting with Keiko Ono-Fullard ’23 for a two-pointer within the first two minutes of the first quarter. After a 6-0 run from West, City went on to score five points. Avery Vest ’22 answered back with a three-pointer to make the score 9-5 West. While the Trojans were down 10-12, Ono-Fullard’s two-pointer through traffic tied it back up to 12 with 2:55 left in the first quarter with the score 13-15 City by the end of the quarter.

Ono-Fullard connected once again with Prouty early in the second quarter. A steal from Meena Tate ’23 turns into two points from Prouty to close the gap between the Little Hawks 17-19 City. Melae’ Lacy ’24 floater tied the score 19-19 with 3:36 left in the opening half. The two teams went back and worth with scoring points and tied 23-23 at halftime. Prouty led the Trojans with eight points and seven rebounds for West.

Carolyn Pierce ’23 tied it up for the Trojans 30-30 with 4:30 left in the third quarter. The Trojans gained their momentum late in the third quarter after an 8-0, with West taking over the lead 40-33 at the end of the quarter. To start off the fourth quarter, Lucy Wolf ’24 made both of her free throws to extend the Trojans’ lead to 42-33. Multiple turnovers cost West to a 42-39 game with 6:31 left in the fourth quarter. Wolf’s basket from behind the arc got the bench on their feet as the Trojans further extended their lead to 48-39 West. City High’s Eviyon Richardson ’22 answered with a three-pointer to make it 48-42 West. Vest made a layup with 2:25 left in the game to make it 50-42 West.

Future Iowa State Cyclone and City High junior Kelsey Joens had an and-one with one minute left in the intense last quarter. With 10.9 seconds left in the quarter, Ono-Fullard made one of her free throws to make the score 52-49. In the final seconds of the game, City High’s Richardson attempted a three-pointer to tie game, but it hit the backboard to run out of time. The Trojans took the win over the previously unbeaten Little Hawks with a final score of 52-49 to improve to a 11-2 record.

BJ Mayer’s squad will travel to Waterloo East next Tuesday. 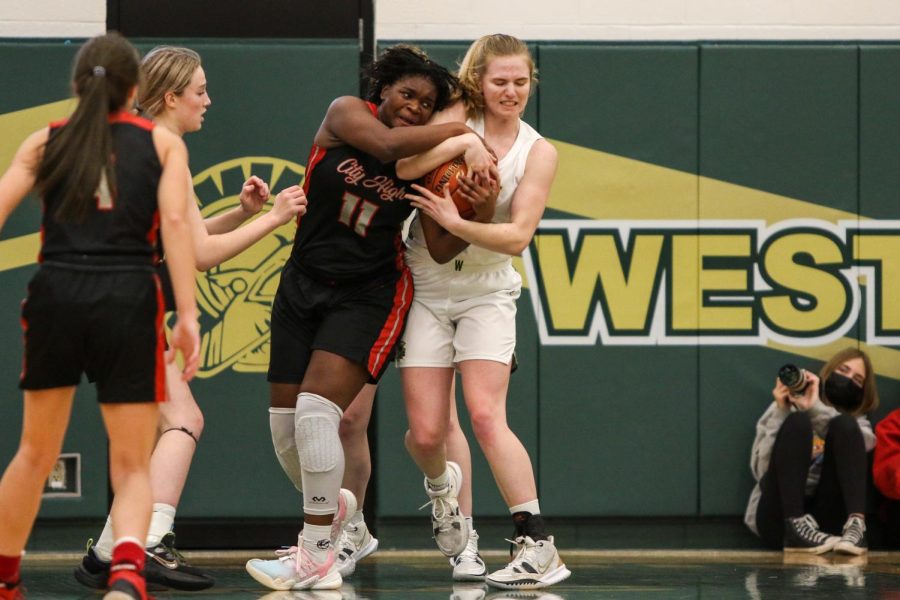 “My good friend Ryne Vander Leest always says it’s tough to beat your rival twice. It didn’t look good in the first half but we played smart down the stretch and got a win out of it,” said junior Ben Hoefer.

Hoefer despite only playing a couple of minutes beat the buzzer of the third quarter with his lay in that went on to help facilitate the Trojans big comeback.

The boys basketball team took down cross-town rival City High for the second time this season by a final score of 68-62.

Coming off one of their biggest wins of the season at Cedar Rapids Prairie the boys basketball team faced off with their quick and athletic cross-town rival City High.

The Little Hawks jumped out to an 8-3 and forced a West High timeout before Jacob Koch ’24 responded with back-to-back corner threes to tie the game at nine with 3:30 left in the first. Christian Barnes ’22 got out in transition for an easy lay-in to force a City High timeout and go up 13-9. Jack McCaffery ’25 made a nice move in the lane to knock down a jumper and give the Trojans a two-point lead heading into the second. Sophomore Kareem Earl’s floater off an inbounds play put the Trojans up 22-16 with six minutes left in the half. City High’s Jamari Newson ’22 led the Little Hawks on a 10-0 run filled with second chances on the offensive end and a handful of transition layups to make it 22-26 City High with 2:48 left in the second. The Trojans’ offense struggled to get things going and let the Little Hawks add six more to their lead and go into the half up 34-22.

Earl got things started for the Trojans when he knocked down a three from the top of the key to end West’s scoring drought as they tried to get themselves back in the game. City High’s Trey Wright ’25 fought through the connect and picked up an and-one to make it 33-46 Little Hawks with 1:53 left in the third. After leading by as much as 14, City High went into the fourth up 42-49. McCaffery’s corner three a minute into the fourth helped lead the Trojans all the way back to a tie game at 49 with 6:28 left in the game. Pete Moe ’22 picked up a steal in the lane and threw it ahead in transition to Earl for an easy lay-in to give the Trojans their first lead of the second half with 2:57 left in the game. With the game all tied up again at 62 and under a minute left West High’s offense pulled the ball out and set up their offense in hopes of getting a good look. Barnes found Moe on the block where he was hugged and on the other side of a personal foul. Moe hit two free throws to give the Trojans a 64-62 lead and the ball with 36.8 seconds left. After inbounding the ball the Little Hawks fouled Barnes in hopes of getting the ball back but the senior iced the game not once but twice when he hit two free throws himself to make it a two-possession game as time expired. West completed the sweep of the Little Hawks by a final score of 68-62. Moe led the Trojans in scoring on the night with 23 points.

The boys basketball team will be back in action on Jan. 25 at home against Waterloo East. 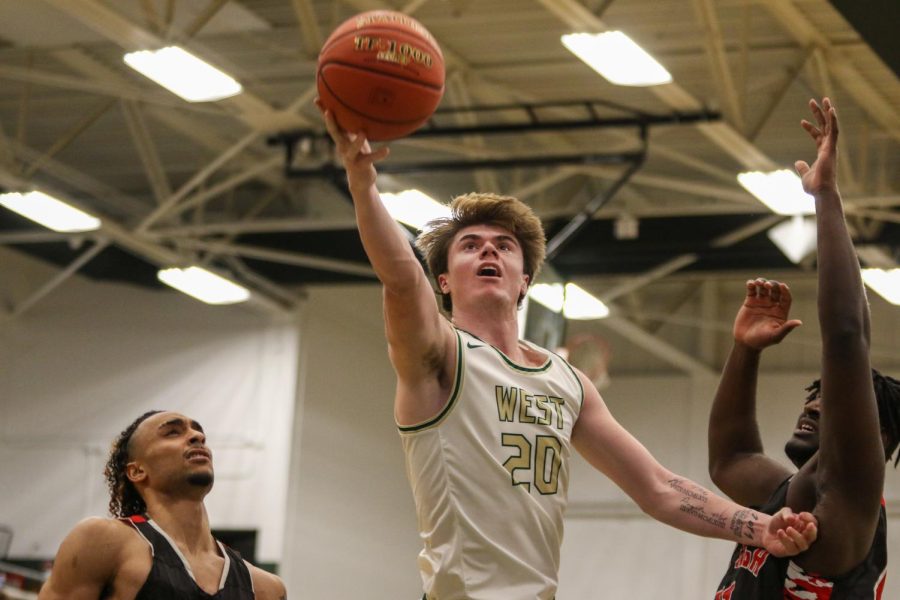 Gallery|12 Photos
Owen Aanestad
Pete Moe '22 goes up for a layup against City High on Jan. 21.
Leave a Comment