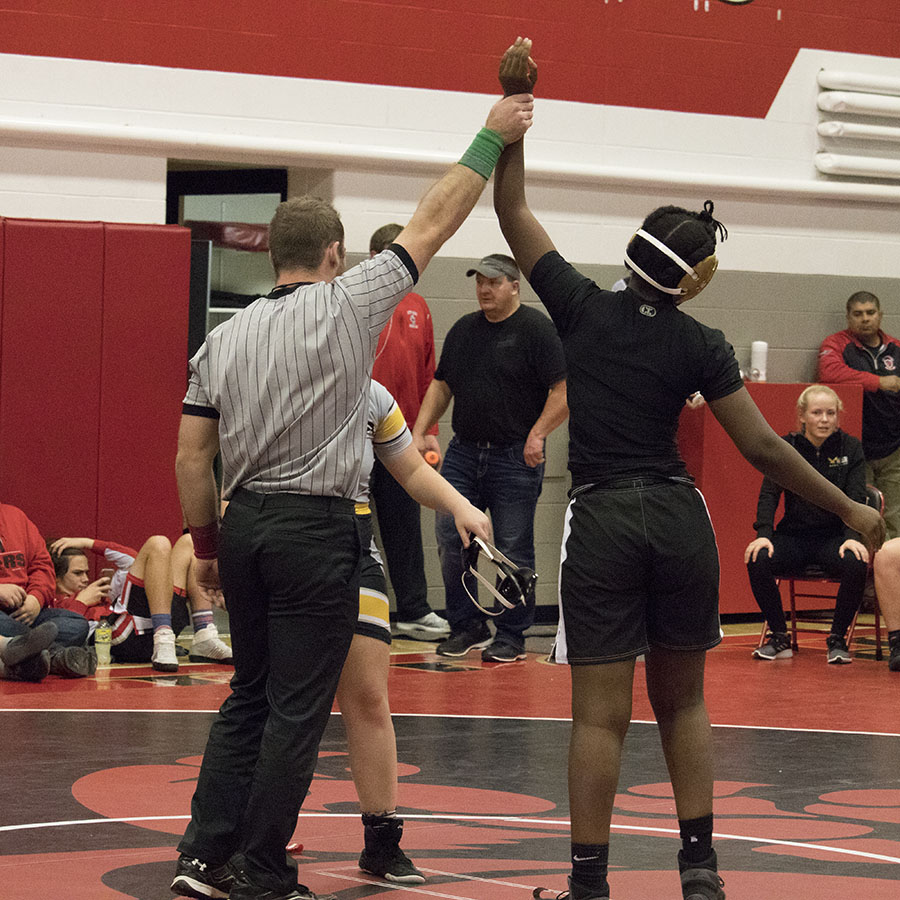 Mayowa Dokun ’22 is exhausted, but holds her hand up in victory after her first win of her wrestling career.

With the start of the girls wrestling program at West, male and female wrestlers now have the same opportunity to participate in the sport.

Wrestling has recently become a sport that anyone can participate in at West High. However, the programs have lots of differences, with girls wrestling building the foundation of their program, and boys wrestling standing on decades of tradition.

Since wrestling for girls is brand new, most female athletes are just getting into the sport for the first time. Here is a look into two contrasting experiences from Brock Pelfrey ’22 and Mayowa Dokun ’22.

Mayowa Dokun ’22 is no stranger to athletics, but prior to this school year she was a stranger to wrestling. Dokun started wrestling for the first time this year and now participates in the sport along with playing volleyball in the fall. She got interested in wrestling because of her older brother Anu Dokun‘s involvement and because her teammates suggested she join.

“I also play volleyball and one of the girls on my team was talking about [wresling] a little before it finally started and it got me intrigued,” Mayowa said.

Wrestling is a relatively new thing to most girls on the team and many of them come from outside sports and compare those experiences to wrestling. Dokun believes that the difference between wrestling and volleyball is the team aspect of each sport.

“Vollyball is a team sport, so if you win or lose it’s not because of one person, it’s because collectively we all made a mistake,” said Mayowa.

This is a contrast to wrestling which she says is based more on the individual than the team.

Wrestling, it’s all on you. You get to focus on yourself and not have to worry about other people when you’re on the mat.”

“Wrestling, it’s all on you. You get to focus on yourself and not have to worry about other people when you’re on the mat,” said Mayowa.

Despite the individual nature of the sport, she believes that the sport fosters a team atmosphere and helps build relationships between the athletes.

“As of right now, I completely love the sport. Especially since all the girls on the team are amazing. We have all gotten really close to one another in a short period of time and we all hang out together outside of wrestling,” said Mayowa.

“This was after all, their first year, and they are still trying to get things organized,” said Makawi.

Mayowa thinks that because they are both still working on finding themselves as a team and getting things in order, their practices are not at the same level as the boys.

“Our practices are less serious than the guys, and I would say we joke around a little more,” said Mayowa.

Despite this, both Mayowa and Makawi believe that in the future there will be some changes in girls wrestling. Makawi says that they will soon start watching match footage together, have a team manager, and start a live tweet like the guys team. Mayowa believes that next year the team practices will also be more serious.

“Next year almost everybody will be returners, so practices will change,” said Mayowa.

Unlike the girls team, the majority of the boys varsity wrestling team is made up of athletes who have participated in the sport for years, oftentimes outside of school. Brett Pelfrey ’22 has been a wrestler for 13 years and participates in club wrestling. Most of his family has also been an avid part of this sport.

“My whole family wrestled. My dad wrestled, my grandpa wrestled, [and] all of my older brothers,” Pelfrey said. “It is in my blood.”

Like many members of the team, Pelfrey was exposed to the sport at a younger age, and as a result, has more experience. Similarly to those on the girls team, many on the boys team participate in other sports. Pelfrey is in football and shot put along with wrestling. He believes that the difference between those sports and wrestling is that wrestling is much less of a team sport.

“It’s a lot more personal … Only you can step on that mat,” said Pelfrey.

Although it is not a team sport, Pelfrey believes that wrestling cultivates a good team atmosphere.

“Wrestling at West is just like a big family [because of] the work we all put in and the familiarity we all have with each other,” said Pelfrey.

Because the team is older, they have more experienced members who have wrestled with each other in and outside of West.

“I think most of the guys on varsity are pretty good, they do club during the off season. We have four or five guys that are ranked top five in the state,” said one of the boys team managers, Lorena Tran ’20.

Since the team has been around for longer, they have made some traditions and will likely make more in the future.

“They make up team hashtags each year, plus they have treats after the tournaments [….] for the whole week they can’t eat to make weight, so after they do the tournaments the managers make treats for them,” said Tran. 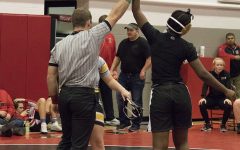 The progression of the girls' wrestling team 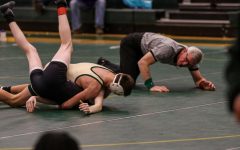 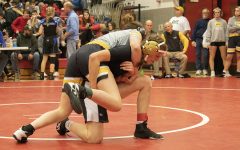