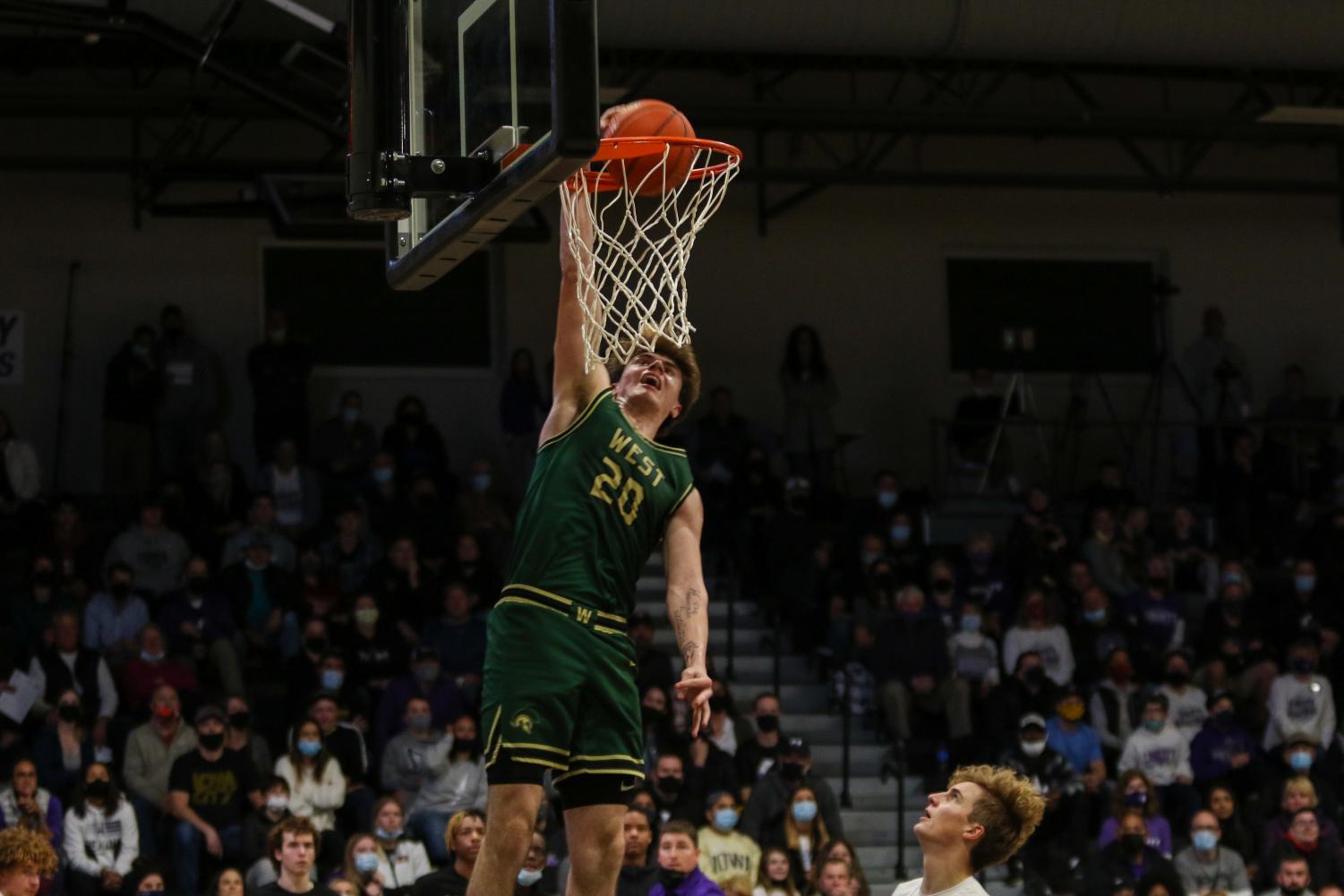 Both the girls and boys basketball teams made the trip north and took down the Lightning on Dec. 10.

Girls get past the Lightning late

In every good program, when one person goes down there’s always someone next in line to step in and help fill their role. When the opportunity called against her former team, Meena Tate ’23 and Keiko Ono-Fullard ’23 answered. Only minutes into the first quarter, senior Emma Ingersoll-Weng came out of the game with an injury, moving Tate and Ono-Fullard into the driver’s seat of the Trojan offense for the remainder of the night.

“She’s a fundamental part of our team in defending, scoring and passing. Having her out of the game really affects us,” Tate said. “I think so many of us stepped up to fill in her role which goes to show that our team is so much more than 1 or two players, that we have depth, talent and leadership to keep going.”

The girls basketball team took down cross-town rival Liberty 56-53 on Dec. 10 behind 20 points from Tate.

Tate knocked down a floater in the lane to get the West offense going over three minutes into the first quarter. The Lightning shot well from beyond the arc to start helping them build a five-point lead early. Anna Prouty ’23 found herself on the other end of some Tate assists from the block to make it 12-14, Liberty, at the end of the first. Tate dribbed her way through the Lightning defense for an easy lay-in to start the second and put the Trojans back on top 20-15. Carolyn Pierce ’23 got comfortable in the corner and hit a big three with two minutes left in the half to extend West’s lead to eight. Liberty’s full-court pressure forced a costly turnover for the Trojans and lead to a big corner to close out the half making it 27-26, West, heading into the break.

“It was definitely different from our other games so far. The crowds are bigger, it’s lounder and just really intense. These games are always especially fun because we’ve played with those girls in club ball and know each other well so it’s always very competitive,” Pierce said.

Tate and Avery Vest ’22 hit back-to-back-to-back threes to open up the third quarter and bring the Trojans’ lead right back to nine. Tate went on to make one of the smartest plays of the night with two minutes left in the third when on an inbounds play under the basket she bounced the ball off the back of a Liberty defender right into her hands for a jumper to make it 40-30, Trojans. West struggled to keep Liberty’s Jasmine Barney ’23 out of the lane letting the Lightning claw back and make it 42-35 heading into the fourth. Ono-Fullard euro stepped through the Liberty defense for a bucket to start the fourth and make it 44-38, Trojans. Head Coach Jamie Brandt and the Lightning weren’t done yet though as they went on to cut West’s lead all the way to one with 1:51 left. Ono-Fullard converted two free throws at the line but Liberty responded with another three to tie it up at 50. Lucy Wolf ’24 picked Barney’s pocket in the lane and went coast to coast for an easy lay-in to put West up 52-50 with less than a minute to go.

“Coach Mayer just told us that he trusted every single one of us to stay focused, make our free throws and get it done,” Pierce said.

Down by two Barney made an aggressive drive to the rim as time expired but was called for a travel, handing the Trojans the ball with 1.6 seconds left up, 55-53. The girls basketball team fought off a comeback and improved to 4-0 with their 56-53 win over cross-town rival Liberty.

BJ Mayer’s girls basketball team will be back in action on Dec. 14 at home against Dubuque Wahlert. 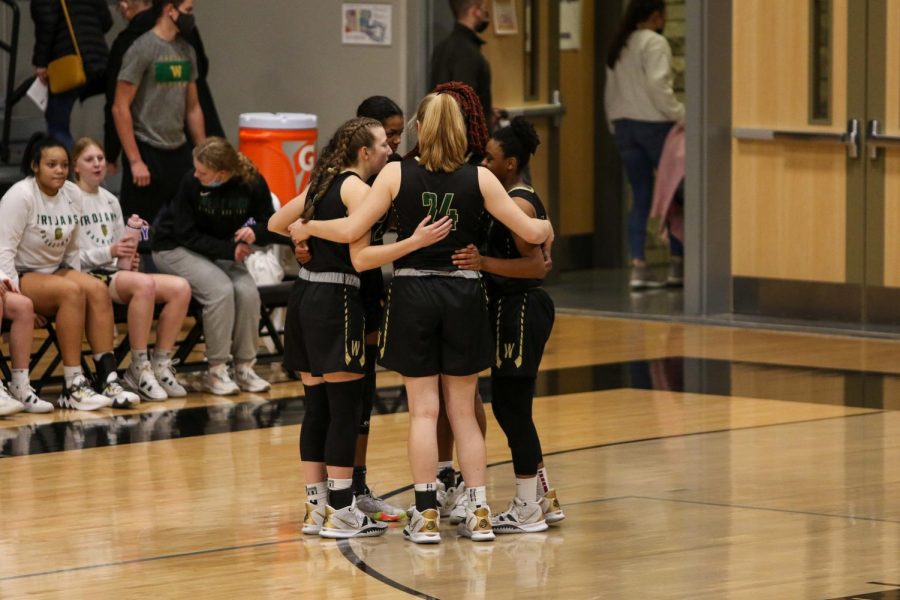 In the second half of the night’s doubleheader Steve Bergman’s boys basketball team had one thing in mind: start fast. That’s exactly what they did, allowing them to dominate cross-town rival Liberty, 73-51. Pete Moe ’22 led the Trojans in scoring with 28 points on the night.

Jacob Koch ’23 brought the ball up the floor for the Trojans made two quick passes to set up Savion Taylor ’23 for an open three and just like that they were rolling.

“Our offense was hitting shots and executing well at the start but a big help to the early lead was that Liberty just wasn’t scoring very much and we were able to take advantage,” Koch said.

The boys basketball team jumped out to a 19-3 lead five minutes into the first after both Moe and Jack McCaffery ’25 connected from beyond the arc. West worked to settle down and run through some of their offensive sets as they headed into the second quarter up 24-10. Koch made a nice play and intercepted a Lighting inbounds pass then went coast to coast for an easy layup to make it 26-14, Trojans, with 5:38 left to go in the first half.

“These first games have been fun, it’s still a little stressful before games but once the games start the stress goes away. The varsity level is similar to the skill level I see in the bigger AAU tournaments,” Koch said.

If there was anything that Bergman’s squad struggled with it was rebounding. The Trojans gave up 21 offensive rebounds on the night allowing the Lightning to capitalize with some easy second-chance points. Liberty got out in transition for what looked like an open layup but Koch stole the ball and made a nice pass all the way down the court for a Moe one-handed slam to put the Trojans up 32-21 with three minutes left in the half. West closed out the half up 42-24.

“Playing in front of crowds this year has been awesome. We feed off the crowd’s energy which makes the games more fun and it defiantly makes us play better,” Moe said.

The Trojans continued to get past the Lightning’s full-court pressure and scoring in transition. Kareem Earl ’24 picked up two of his 11 points on the night when he euro stepped his way through the lane for a layup to put West up 50-29 three minutes into the second half. The Trojans headed into the fourth with a convincing 22-point lead. Bergman emptied the bench with about two minutes to play as West picked up their third win of the season by a score of 73-51.

The boys basketball team will be back in action on Dec. 14 when they make the trip to Dubuque to take on the Wahlert Catholic Golden Eagles. 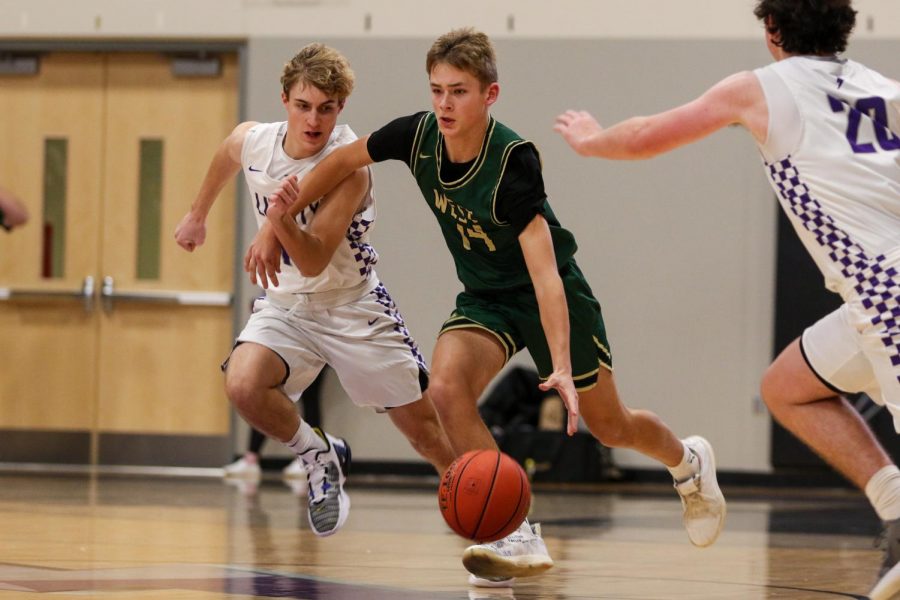