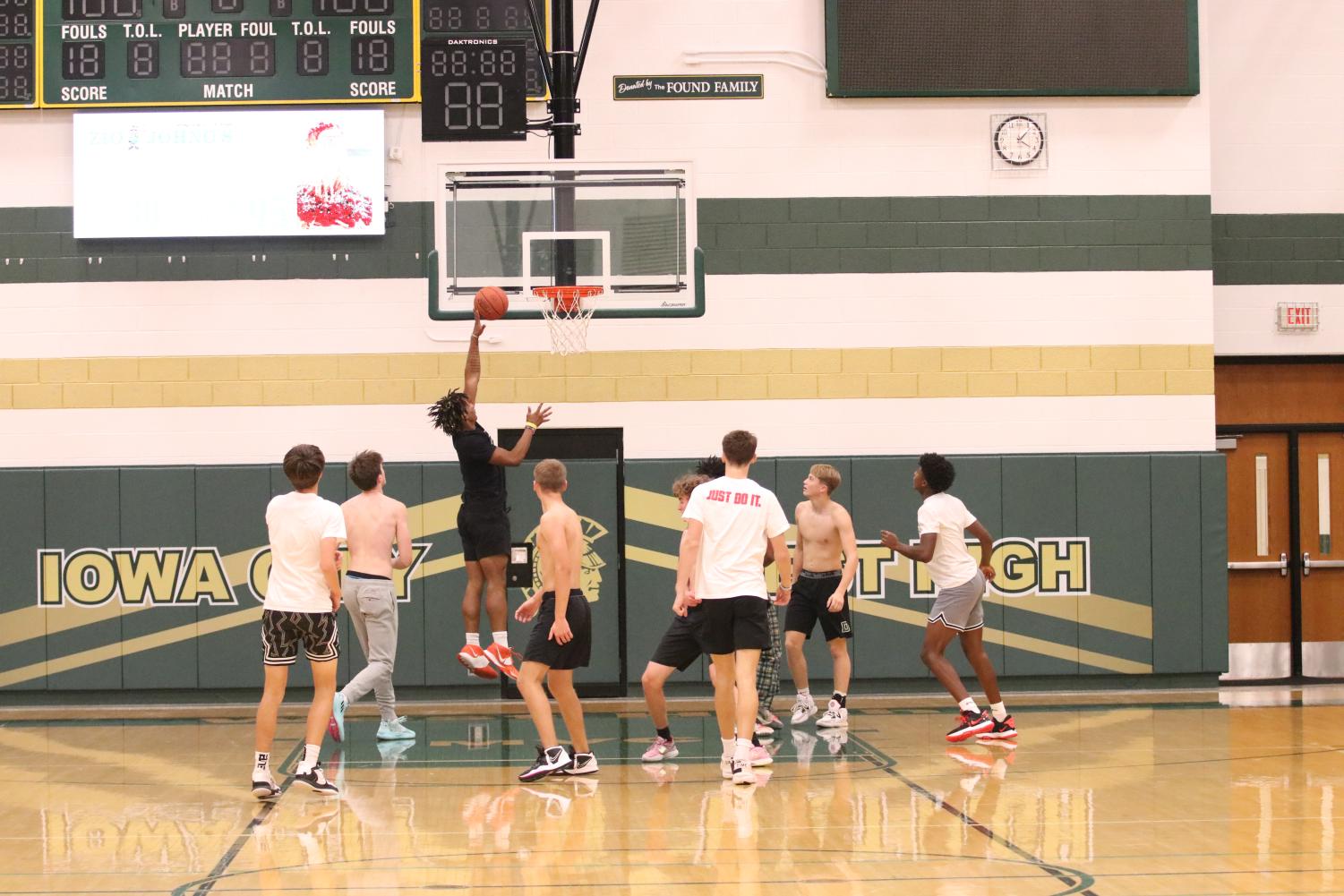 West Basketball is back. Learn how the boys and girls are preparing for their upcoming seasons, and how they are getting ready to make it back to Wells Fargo Arena for another state tournament run.

New coach, new players and a new season. The Girl’s basketball team is back for another season and practice officially started November 7th. After BJ Mayer stepped down from his head coaching position to fill the position of Athletic Director at West, Nate Frese, his assistant coach stepped up to fill the head coaching position for the first time in the 2022-2023 season. Not only is there a new head coach on the sidelines for this season, but there are new players as well.

Losing a few pivotal seniors last year, Emma Ingersoll-Weng and Avery Vest, West basketball has to learn how to fill those gaps in their team. “We will need people to be leaders by example as Avery was,” Frese explained. “We will need some older players to fill that leadership role.” 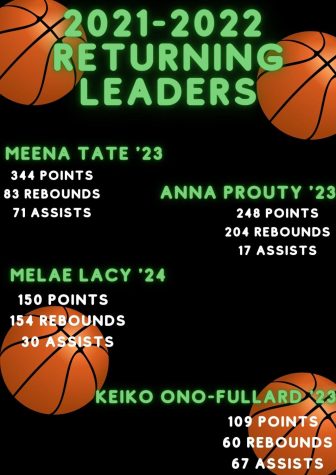 Ingersoll-Weng suffered two ACL tears in her career as a Trojan and while she was on the bench with injuries, the team learned how to play with her not on the court. “We adapted without Emma when she was injured, so we know what we are capable of,” Frese said.

While both Ingersoll-Weng and Vest were a vital part of the team, the girls know they can be successful and adapt quickly to the new roster without their names.

With new players stepping in to fill the shoes of those seniors, the players’ shoes are not the only ones being filled. Head coach Nate Frese is also in his debut year as a coach. Dartmouth women’s basketball commit Meena Tate ’23 explained her excitement about Frese stepping up into the head coaching position. “Frese is a smart human. He’s a very analytical coach. He’s a good coach. I think his ideas are really good.”

Frese is not planning on making any colossal changes to the team but he says there are a few small changes he will make to make things run smoother. “There are few small things about like our offense that I think will make it easier for the players. So I want to put in a couple of more like guidelines that they can follow and a little bit more structure so that they don’t have to sort of get gridlock and stop and worry about am I making the right cut? Should I be cutting here or whatever.” Frese explained.

But the little changes aren’t only on the court. “I’d like to get a little bit more input from the players regarding a better pregame warmup and a better use of our time, I guess and how we do some things at practice.” said Frese.

There are a few more changes to the bench, there will be a new female assistant coach, Corinne Sheffield will be assisting with the girls this season.

I am excited to have a female perspective on the bench. Because whenever we would talk too much or you might have a perspective that the other coaches never have, and another person like that on the staff is going to be so helpful”

With a brand new year, there are also always new leaders on the team, “There isn’t, at least to my knowledge, a ‘you have to just wait your turn attitude.’” said Frese. “That’s not the way West basketball has ever run.”

“There are a couple of these seniors now that they’ve been playing varsity since they were in ninth grade. And just think like, well, what if that what if some senior would have told them that or like said like, you don’t belong here because you’re in ninth grade? So that has not happened.” said Frese.

In preparing for the incoming season, West has been preparing since summer, which started in the form of summer workouts and lifts. “In the fall, we play a fall league for six weeks and we just added a skill session on Sunday nights,” Frese said. “We have several younger players that go to all Iowa attack workouts on Monday, and Thursday nights. Its just finished up last week. So I know they’re doing a little bit of basketball outside”.

With new coaches, leaders and preparations since June in place. West basketball is ready for another successful season and hoping for another run at state, since their last trip to Wells in the 2020-2021 season.

Bergman’s boys are back. The boys’ basketball team is back in full swing preparing for their 2022-2023 season. Along with practice every day after school, the team is also learning how to adjust to the season after losing many vital seniors.

After losing important players like power forward Pete Moe and point guard Christian Barnes, the boys are trying to find their footing with new leadership.

We miss them and their talents but we have a strong young core coming back this year with lots of scoring power.”

“I know I need to be seen more on rebounding so I have been working on that to be more successful,” said Koch.

With losing players there are always worries that the team dynamic will change and not be as successful as it was in previous years. “ I am not worried about that because I think we are working hard on being together and working together.” Soumaila Sanogo said.

The boys are working hard to fill those gaps in their roster and start the season off as strong.

The team isn’t looking to make any huge changes this year but one main thing they are focusing on is making sure the team is together on the court, “We are looking at running a few new things on offense like most years and we will need to add a few things due to the addition of the shot clock,” head coach Steve Bergman explained.

The team is hoping that if they work together on and off the court they will get the results that they are hoping for.

“We have several upperclassmen with good experience. They need to provide leadership,” said Bergman. 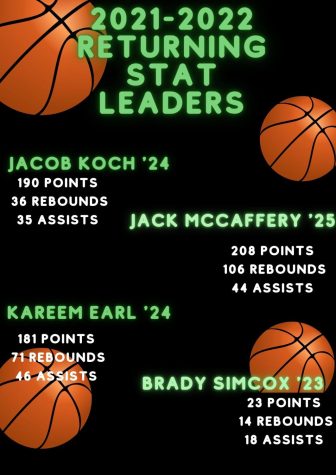 “I’m excited to watch how our three juniors and our sophomore Jack [McCaffery] work together with all of the high expectations, especially with some of our guys being ranked,” explained Koch.

Juniors Taeveon Stevens, Kareem Earl and Jacob Koch are looking to make a difference on the court and step up this season. They also have sophomore Jack Mccaffery who is ranked 51st in the nation for small forwards in the class of 2025.

But for West, it isn’t all about who is going to be playing the most minutes on the court. Although there are many returning varsity players that will be seeing a lot of playing time, Bergman and the rest of the boys’ coaching squad are excited to see some of the new names on the varsity roster.

“We have a few new guys that we are hoping can contribute. TaeVeon Stevens ’24, Julian (JuJu) Manson ’26, Aidan Jacobson ’24, Canaan Barnes ’24 and Mason Woods ’25 are some newcomers,” said Bergman.

Koch explained the boys’ preseason schedule in preparation for a successful year and hopefully a run at the state tournament.

“We have had lots of open gyms and/or practices with the west team and we have scrimmaged other high schools so we have all the basics down for when our coaches take over. Some of our main guys also play AAU (American Athletic Union) during the summer to keep their skills fresh,” said Koch.

With preparations in place, the boys are looking forward to the season ahead.

“I am excited to see everybody on the team I’m excited to see all my brothers because we have all been working for this. It’s time that we show people we can win,” said Sanogo.

Koch echoed that statement, “Our goals are to improve from last season and make it to the state tournament and see what happens from there.”

Catch the Trojans in a girls-boys doubleheader at Clear Creek Amana Highschool on November 29th.