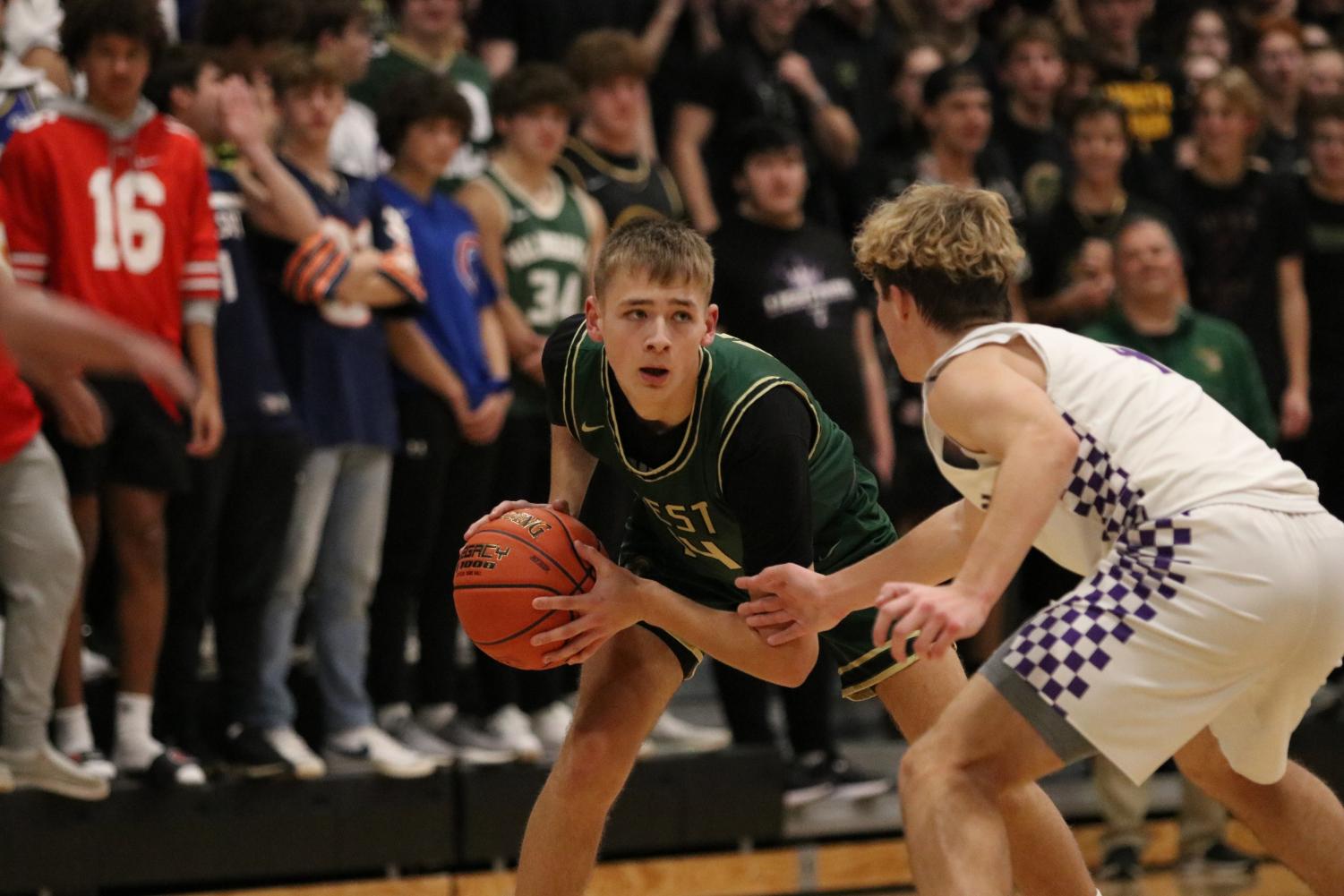 Brady Simcox ’23 looks for an open space to pass the ball. (Isabella Tisdale)

Brady Simcox ’23 looks for an open space to pass the ball.

Both basketball teams beat Liberty Dec. 9. The girls by just two points but the boys by 17 points.

Girls slide past Liberty in a nail-biting match

First-year head coach Nate Frese got his first crosstown rivalry win against Liberty on Dec. 9. In a tight, defensive battle, West came up on top 42-40. While the Trojans couldn’t make many things happen in the paint, they got the job done from beyond the arc.

Almost a minute into the game, West scored first with a three. Liberty bounced back but with a Meena Tate ’23 three and two free throws by Anna Prouty ’23, West was up 11-9 with 1:30 left in the first quarter. Freshman Grace Fincham laid the ball in at the last second to give the Trojans a 4-point lead heading into the second quarter.

Melae Lacy ’24 blocked a Liberty shot, giving the opportunity for Keiko Ono-Fullard ’23 to hit a three at the other end. Another block, this time by Carolyn Pierce ’23, got the ball to Ono-Fullard who then kicked it back out to Pierce to hit the three. Liberty answered back with a quick layup but with a Tate jumper, West was up 21-13 with about three minutes left in the half. Ono-Fullard’s move to the basket put the Trojans up 25-18 to end the half.

Prouty made another free throw, but Liberty went on a 7-0 run. Lacy finished a layup through traffic, putting the score at 28-25 West. An Ono-Fullard steal led to a long possession by West ending in a Prouty put-back as the shot clock expired. The teams went back and forth, but even after a Lucy Wolf ’24 block, Liberty was up 33-32 at the end of the quarter.

The fourth quarter was a defensive showdown. Not long into the fourth quarter, Tate went to the line and made both free throws. Wolf got a steal and with a head fake, hit the jumper. With the crowd fired up, Tate made a floater with 2:30 left in the fourth quarter. The Trojans were up 42-36 with a minute left, but Liberty was able to put a few points on the board. However, it wasn’t enough and the Trojans won 42-40. 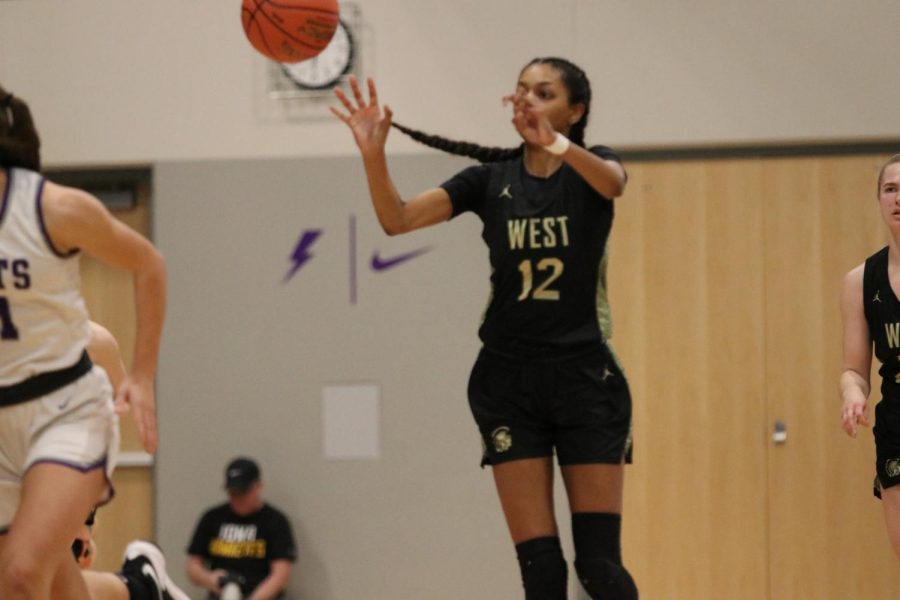 Boys sail past the Bolts

If the girls’ team win wasn’t enough, the boys traveled to Liberty to take on the bolts after the girls’ game. After a slow start to the game, the team put the game away in the second half, winning 68-51.

Liberty scored first but it took them almost a minute and a half to do so. The first points for the Trojans came from the three-point line courtesy of TaeVeon Stevens ‘24. Kareem Earl ’24 hit a bucket as did Jack McCaffery ’25, putting West up 7-2. Liberty bounced back but didn’t get the lead, the score 12-10 with the half of the quarter gone. Jacob Koch ’24 hit a floater and a three with less than a minute left to put West ahead. McCaffery scored on a last-second put-back to make the lead 19-14 heading into the second quarter.

Liberty quickly tied up the game at 19 points, but McCaffery had a nice reverse layup to put West ahead by two. Liberty pulled ahead with a few threes and jumpers of their own, leading by as much as 12 points. Kareem Earl ’24 finished a few free throws and with a McCaffery three, the Trojans got within four points to end the half.

The third quarter was when West really got things moving. Earl finished the and-one play, for a 35-33 lead. The Trojans never looked back after that. Freshman Julian Manson had a quick steal and layup to put West ahead 41-35. Two consecutive McCaffery threes forced Liberty to take a timeout with 2:45 left in the third quarter. A Brady Simcox ’23 three and a last a second assist by Stevens to Daniel Robinson ’24 put West up 13 points at the end of the third quarter.

The Trojans continued their momentum into the fourth quarter. McCaffery got a bucket using a nifty spin move. Ben Hoefer ’23 kicked it out to Simcox for a jumper giving West a 15-point lead. Earl grabbed the ball for a steal and easy layup with two minutes to go in regulation. There was no way the Lightning could recover and West won 68-51. 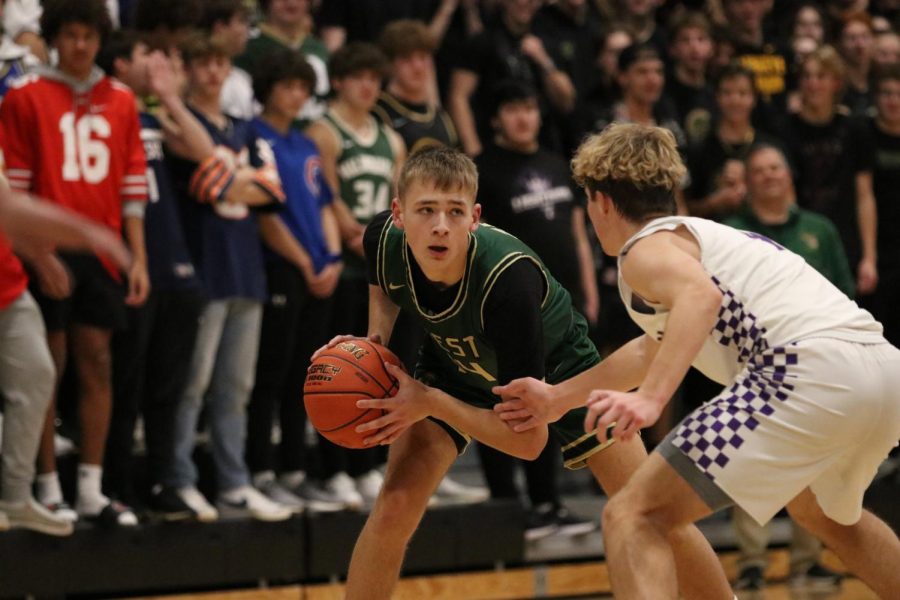