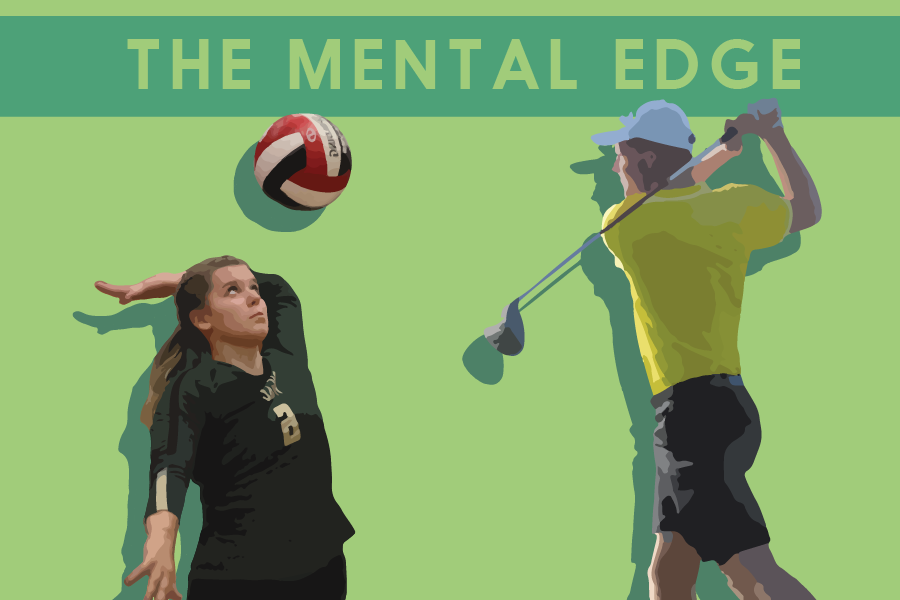 From the court to the course, having the right mentality can change the outcome of a game´s most important moments.

Behind the perfect swing

Sweat streaks across his forehead, his skin is stickier than pancakes drenched in syrup on a lazy Sunday morning. His ears are pounding, muscles tightening. This feeling never gets old. At least, that’s the case for Iowa City West golfer Kyle Spence ’19.

“I could just play a hole and then walk back to the tee box and play it … 10,000 times [again], and it would be a completely different experience every single time. That’s just the nature of the game,” Spence said.

Having moved to America from Ireland, Spence’s father learned golf through work and later introduced it to his son.

Even with a love and dedication for the game, Spence still spends hours improving and perfecting his swing. From working on his grip to analyzing videos of his own performance, Spence is always looking for ways to improve. “If I win a tournament, I could always go back and say there’s five or six shots there that I still left out on the course,” Spence said.

Athletes can spend hours a day pushing their bodies, but that’s only half of the battle. “[In] golf, one of the most important traits is to make sure that you run through the tape. And to make sure that you know if you have a bad hole, you pick up and go to the next one, because the next one shouldn’t be affected by the last one,” Spence said. “It’s a different hole and that’s the only way to recover.”

If I win a tournament, I could always go back and say there’s five or six shots there that I still left out on the course.”

While the physical components are important to getting a perfect swing, the mental aspects are just as important.

“I consistently pick the most terrifying, terrible shots because my [signature] is that if I make myself really, really uncomfortable in practice and pick the worst possible lie, worst possible shot in practice, nothing is going to faze me when I play in the tournament,” Spence said. “The worst break [or] the worst hit off of a tree on to a terrible spot can’t faze me because I’ve done it before … It’s better to be faced with it [in practice] than to be faced with it in the tournament having never seen it before.”

Behind the perfect serve

According to Grace Fleckenstein ’19, getting the perfect serve is all about mentality.“Volleyball is so mental. If you have any doubts in your head that you’re going to miss a serve, you probably will, even if you’ve served thousands and thousands of balls,” Fleckenstein said.

However, the mental components in volleyball differ from other sports.“Since it’s a team sport, you can’t get in your own head because it will create islands, and we can’t have six individual islands on the team,” said Rylee Fay ’20, a member of the volleyball team.

The key to getting that perfect serve is knowing how to recover from the bad ones. “I just brush it off. I focus on [the fact that] this is a team sport,” said Haley Gallagher ’19, explaining how she and the team recover from their mistakes.

“You have to play [as] one team. Your teammates have to have trust in you and have to know that you’re going to come back with the next pass or … whatever you do next,” said Gallagher.

The team strives to leave their personal lives behind when stepping onto the court. “Our coach says … Be where your shoes are,’” Fleckenstein said. “So if we’re in the gym, we’re supposed to leave all outside things outside of the gym.”

The still-recent death of Caroline Found continues to put day-to-day struggles into perspective. Every year, the team visits the tree for Found, writing something down on a ribbon and tying it to the tree to honor her life.

“That was such a big event that happened,” said Fay, recalling the accident that took Found’s life.
“[There are] little things in our lives that you bring into the court; there could be something so much worse that could happen to us, and we just need to let everything that isn’t big [not] affect us, because something could happen any day,” Fay said.

In the end, getting that perfect serve all comes down to being a team.“We’re teammates, and we all are trying to accomplish the same goal,” Gallagher said. “You can’t let your problems affect you when you step onto the court. I feel like if you do it, affects the whole team’s mojo.”