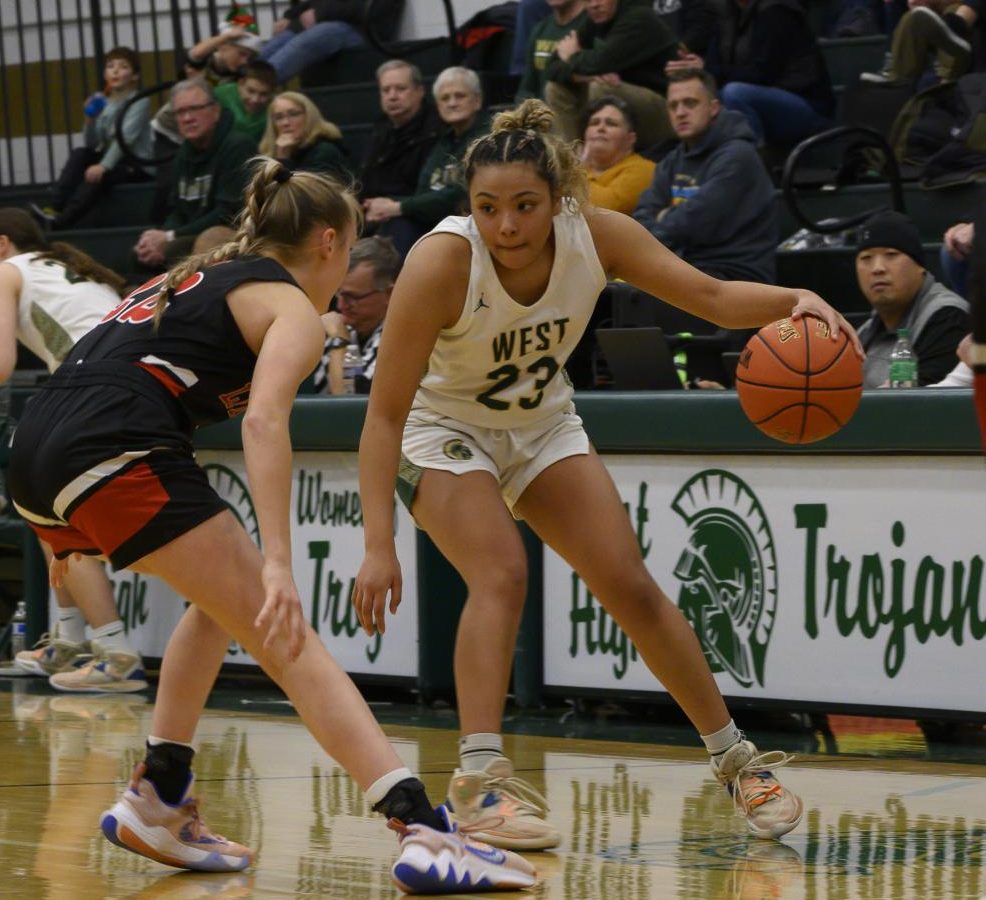 Senior Keiko Ono-Fullard stares down a Linn-Mar player at the game on Friday, Dec. 16. (Sachiko Goto)

Senior Keiko Ono-Fullard stares down a Linn-Mar player at the game on Friday, Dec. 16.

Trojans take on Linn-Mar in double-header

Last night, the West High gym was filled with fans for another boys and girls doubleheader. This time the Trojan squads were taking on our neighbors to the north, the Linn-Mar lions. The girl’s game was underway with free admission and popcorn courtesy of ImOn Communications and a spirited student section decked out in ugly holiday sweaters.

West junior Melae’ Lacy won the tip-off, and the game was off to a quick start for Nate Frese’s lineup. Dartmouth basketball commit Meena Tate ’23 put the first points on the board in the second minute. The lions responded with a three-pointer from freshman Dreya Kern. The back-and-forth continued, which ended in a low-scoring first quarter. West narrowly led 9-7.

The lions came out strong in the second quarter, with senior Linn-Mar point guard Zoe Kennedy making a three-pointer early on. The lion’s intensity continued, and the trojans called a time-out while trailing 9-14. A drive down-court and assist from senior guard Keiko Ono-Fullard, allowed senior Zola Gross to sink a 3-pointer and make up some of the gap in points. With a Carolyn Pierce ’23 layup, West was able to trail by 6 points going into the last minute of the half. Linn-Mar kept up the pace, and the trojans couldn’t convert and followed 16-25 going into halftime.

Another 3-pointer from Kern gave the lions a 14-point lead 3 minutes into the 3rd quarter. An Anna Prouty ’23 assist and Lacy layup boosted the trojans, narrowing the gap to 21-33. West fought to close the gap by the end of the third quarter but fell short. Leaving the girls going into the last quarter trailing by 12 points.

Kennedy put the first points on the fourth-quarter board with a three-pointer in the third minute. The Trojans quickly answered with a Tate assist to Pierce’s three-pointer, getting the student section up and loud for the game’s final stretch.

Prouty made a layup, and freshman Grace Fincham had an and 1. Putting West at 36-44 in the last 5 minutes of the game. The Trojans could not make up for the point deficit and received their first loss of the season, falling to the lions 39-49.

Catch the girls back in the West gym on Thursday, Dec. 22, facing off against Dowling Catholic.

Shortly after the girl’s game, the boy’s game commenced. Bergmann’s boys were back home on Trojan territory after a tough loss against Dubuque Wahlert on Tuesday night. The boys were ready to take the court with the packed stands from the girl’s game remaining intact and senior Kaitlyn Schmidt-Rundell singing the national anthem

West was quick to act on the lions, with junior guard Jacob Koch putting the first points on the board for the boys, with an assist from sophomore Jack McCaffrey in the first 20 seconds of the game. Power forward Ian Mindrup added the first points for the lions shortly after, an indicator of the cutthroat game this would become. Junior Kareem Earl showed up early for the boys, as well as McCaffery. Giving the boys a healthy 6-2 lead early in the first quarter. They continued this confidence heading into the second quarter with an 18-11 edge.

Linn-Mar’s Ian Bettis and Davis Kern thinned the gap early in the second quarter, creating only a 2-point lead for the Trojans. This narrow gap continued until Kern closed it, putting the lions up 25-24. The lions lead quickly diminished after a layup from senior Brady Simcox boosted the Trojans 28-27. The teams took this 1-point margin into the locker room for halftime.
During halftime, the West High Poms performed their 4th-place state dance routine for the crowd.

The second half started with Jack McCaffery controlling the scoreboard, putting 4 points up for the Trojans in the first minute. Koch quickly sunk a 3-pointer in the fourth minute, creating a 6-point margin, West-leading 35-29. The tug-of-war between the trojans and the lions continued, but West pulled out a 44-38 lead going into the fourth.

A McCaffrey 3-pointer pushed the boys into 51 points in the third minute of the quarter. Dominating the lions by 13. The boys controlled the lions and pulled out a 62-43 win.

You can catch the 4-1 trojans back home on Wednesday, Dec. 21, against Cedar Rapids Jefferson.